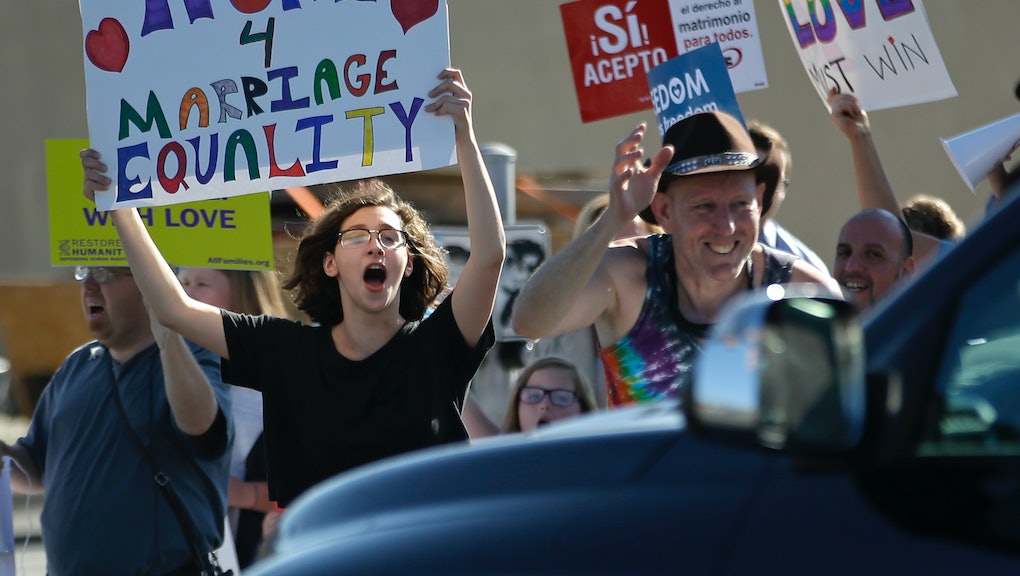 5 Battles the LGBT Movement Needs to Fight Next

On Tuesday, the nation's highest court heard oral arguments on same-sex marriage, pushing this lingering race one step closer to the finish line. Should the Supreme Court rule favorably in the case of Obergefell v. Hodges, and it may, advocates will have secured federal rights for those LGBT people who desire to marry people of the same (legally classified) sex.

While a meaningful step, marriage equality is hardly the end of the LGBT rights movement. In fact, same-sex marriage has been derided by some because of the disproportionate energy and resources devoted to it over other equally, if not more, pressing LGBT issues.

"There is still widespread inequality within the LGBT community based on race, class, gender, sexuality, age, ability, nationality — you name it," Harvard historian Timothy Patrick McCarthy told Mic. Indeed, today poor and non-white LGBT individuals continue to struggle against the interconnected forces of queer, trans and racial antagonism, as well as economic disenfranchisement. Any LGBT movement of the future must respond to the needs of all within the community if is to be effective.

Marriage equality will hopefully become a reality when the Supreme Court makes its verdict in early summer, but this fight must not signal the end of a movement; on the contrary, this is only the beginning. Moving forward, we must harness the vigor that has energized this movement to fix advocacy issues beyond marriage — issues like:

1. Violence against trans women of color

LGBT communities can bring an end to the silencing and killing of trans women of color by "building a movement that centers the narratives and leadership of those in our communities most disproportionately impacted by structural oppression," Lourdes Ashley Hunter, national director of the Trans Women of Color Collective, told Mic.

LGBT youth often face seemingly insurmountable odds when it comes to homelessness. Many are kicked out of their homes after coming out, and, to make matters worse, they report "great difficulty finding shelters that accept and respect them," according to the National Coalition for the Homeless. Data collected by the Williams Institute also found that "LGBT youth are at high risk of homelessness, often as a result of family rejection and abuse."

As such, LGBT youth homelessness is a national problem that requires a comprehensive response addressing "the systems of care that are failing LGBT youth, such as educational institutions, child protective services and juvenile justice systems," Lillian Rivera, director of advocacy and capacity building at the Hetrick-Martin Institute, told Mic.

LGBT people of color have the highest rates of poverty of any group in the U.S., according to an April 2015 report from the Movement Advancement Project and Center for American Progress. Black and Latino people made up 62% of transgender and gender nonconforming survey respondents reporting extreme poverty incomes below $10,000. The Williams Institute found that "24% of lesbians and bisexual women are poor, compared with only 19% of heterosexual women," and poverty rates for lesbian, gay and bisexual adults are overall higher than their heterosexual counterparts.

"The rights we've been able to secure rely on the economic and political capital of our community," B. Cole, executive director of the Brown Boi Project, told Mic. So what does that mean for the LGBT movement? It must "fight for economic justice for every LGBT person, [as] we secure our ability to advocate for equality far into the future," Cole said.

Much public attention has centered on the bloated U.S. prison system, but the disproportionate criminalization of LGBT youth — often a result of over-policing — has gone underreported. This is a critical issue, given that "gay, transgender, and gender nonconforming youth are significantly overrepresented in the juvenile justice system," according to the Center for American Progress. "Approximately 300,000 gay and transgender youth are arrested and/or detained each year, of which more than 60% are black or Latino," a CAP report found. "Though gay and transgender youth represent just 5% to 7% of the nation's overall youth population, they compose 13% to 15% of those currently in the juvenile justice system."

Criminal justice and community safety advocate Marlon Peterson told Mic we must remember that "our LGBT young people are people. We must recognize and value them as such and not allow them to be mistreated by law enforcement or ostracized within the juvenile justice system."

It's clear there's much work to be done, but advancing the LGBT movement for marriage will bring about substantive change in the lives of so many more people.

"As the movement prepares for victory this spring at the Supreme Court in terms of winning marriage equality, it would do well to commit itself to a more radical redistribution of resources in order to demand and achieve full equity and justice in these other arenas," McCarthy told Mic. "Until we are all equal and free, protected and respected, liberation will still be an elusive aspiration."