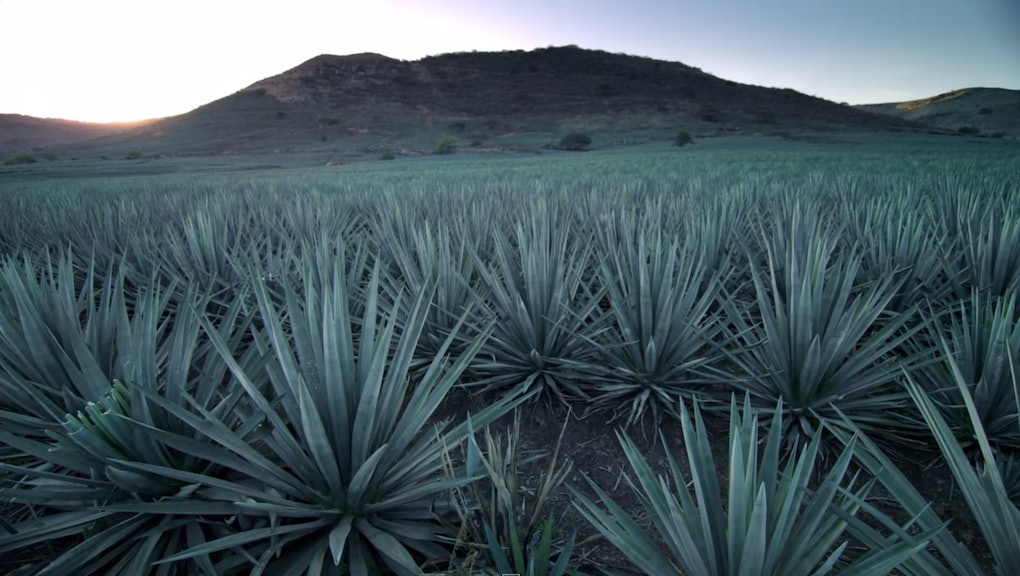 15 Mesmerizing GIFs Show Exactly How Tequila Is Made

The blue agave plants that go into tequila sprout from the rich soil of certain areas in Mexico. The liquor is known to give many the night of their lives, along with a morning of terrible headaches and a day spent napping on the couch with takeout containers scattered all around.

While it may be abused on Cinco de Mayo nowadays, tequila dates as far back as the Aztecs. The early rulers of the region fermented the agave plant and worshiped it, using it almost strictly in rituals. To this day, the production of tequila is closely regulated. Many distilleries still go through the largely manual effort of creating it, without much heavy farm machinery, before it's shipped all over the world.

From field to glass, here's exactly how tequila is made:

It all starts with the agave plant, in the fields of Mexico. Each one takes about eight years to mature before it can be harvested for tequila. Today, almost 300 million are needed every year in order to meet the demand.

Jimadors (experienced agave farmers) uproot the plants, which can weigh up to 240 pounds, using a coa, a circular blade on the end of a long pole.

The fleshy leaves are discarded in the fields, but can grow to five feet long.

For making tequila, only the piña, or fruit, is needed.

The piñas are brought out of the fields and are made into tequila at one of about 100 distilleries in the tequila-producing regions of Mexico.

If the agaves are grown in the highlands, they'll produce sweeter and fruitier tequila. Those in the lowlands produce earthier flavors. Each piña will produce enough juice for roughly five 750 ml bottles of tequila.

They're often split before the next phase.

The piña halves are loaded into a giant oven, where they'll bake for a day at about 240 degrees Fahrenheit.

This baking process breaks down the complex sugars in the fruit, all the better for fermenting. When ready, they're unloaded and ready to be ground up.

Industrial strength grinders macerate the cooked fruit to get at the juices within.

The pulpy product that comes out is one of the last steps in extracting the juices.

This pulp is further pulverized by a massive stone.

The nectar of tequila is what's left.

The agave juice will often sit for four to five days in wooden or stainless steel vats while yeast acts on the sugars to create alcohol (fermentation). However, the liquid has a pretty low alcohol content at this stage.

This liquid (known as wort) is then distilled for several hours, a process that removes impurities and through which the high-alcohol condensation is collected. This is where it starts to get good.

After distilling, the tequila can be aged in oak barrels for up to a year, known as reposado tequila. Anejo tequila, an even higher-end version (about $50 and up), is aged in the same barrels that were used to make the reposado for up to three more years. Both are darker in color than their silver cousin.

The last step is bottling. Some companies, even some mass-produced brands, make their glass bottles by hand.

Then you know what comes next...

Tequila, enjoyed by the Aztecs, perfected by Mexico, now consumed around the world.