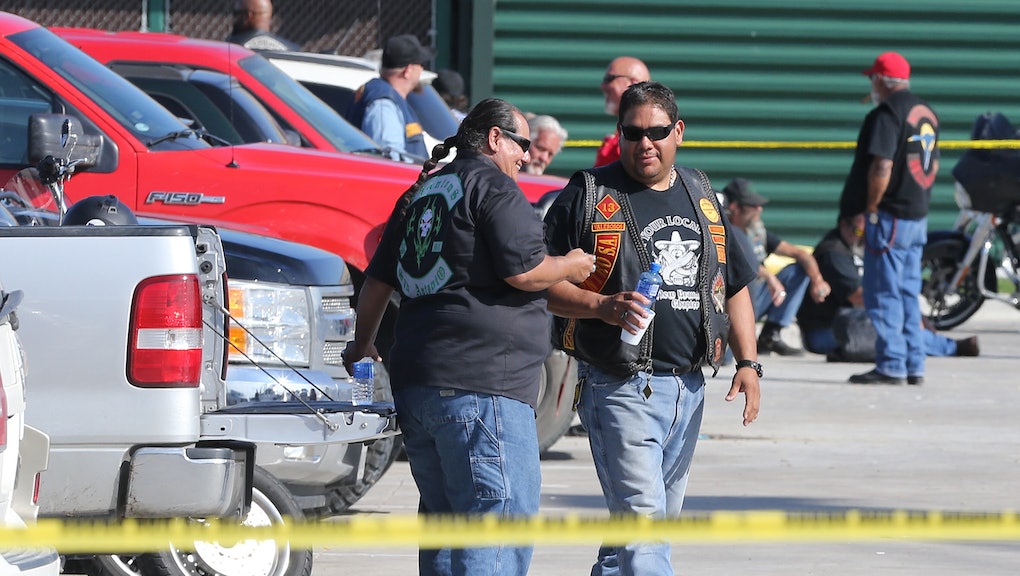 What the Response to Waco Says About How We Treat White vs. Black Criminals

A shootout between biker gangs outside of a restaurant in Waco, Texas, on Sunday has resulted in the deaths of at least nine people, with 18 people injured. As of today, more than 165 members of several rival gangs have been arrested or jailed in connection to the shooting, according to KWTX.

Although Waco Police Department spokesman Sgt. Patrick Swanton described the massive shootout as "the worst crime scene, the most violent crime scene, that [he has] ever been involved in" during a press conference on Sunday, one photo taken after the event depicts a seemingly relaxed interaction between police and gang members, who appear to be mostly white.

The photo contrasts sharply with those taken in the aftermath of police violence in places like Baltimore and Ferguson, leading some to question the extent to which the police and media respond differently to white and non-white potential suspects.

At Judd Legum points out at ThinkProgress, some commentators have noted the photo appears to depict "a remarkably casual treatment of individuals who could be potential suspects for mass murder. No one is handcuffed and several people appear to have access to their cell phones."

The images of comparatively calm police and civilian engagement in Waco is strikingly different than those captured during the Ferguson protests and the Baltimore uprising, where protesters were met with tear gas, rubber bullets and police and National Guard officers in riot gear and armored vehicles.

In Baltimore, droves of police sequestered specific areas in black neighborhoods as if they were preparing for battle.

According to ThinkProgress, gang members in Waco had reportedly shot at police upon their arrival. Yet the Waco crime scene looked relatively at ease in the aftermath of the shootout.

While these images may not yet tell the whole story, they reveal a certain hypocrisy in police and media responses to violence when it primarily involves white people:

Despite law enforcement's apparent foreknowledge of the impending gang clash, officers did not don the militarized riot gear seen in spaces across the country where mostly black groups have been protesting against police brutality.

After the shootout, for example, many media outlets referenced suspects and participants in the melee as "members of the motorcycle club" and "bikers." Unlike in Baltimore, local and federal elected officials did not host press conferences where Waco suspects were referred to as "thugs."

There aren't any detailed think pieces commenting on the various forms of cultural pathology inherent in bike culture surfacing on the Internet, either. Pundits like Bill Maher have yet to connect country or rock music to the violent behaviors of the Waco shooting suspects (something Maher attempted when interviewing rapper Killer Mike about hip hop and violence on Real Time With Bill Maher in May). Leather motorcycle jackets and tattoos haven't been cited as potentially problematic aspects of biker culture.

Contrast this with the sartorial chooses of young black people, like donning hoodies and sagging pants, being frequently highlighted as evidence of black youths' lack of ethics.

There was no hand-wringing over "white on white" crime.

The shooting was also not characterized as another example of "white on white" crime. In fact, the lack of focus on the race of the suspects suggests the public still believes whiteness is incidental, whereas black people are exceptionally criminal. "American discourse on crime is deeply politicized and influenced by racial and class bias. 'Crime' is synonymous with 'black.'" Adam Hudson wrote at AlterNet. If that is the case, "white" is seemingly synonymous to lawful.

Finally, unlike during the response to Baltimore, there is no talk of absent fathers nor bad mothers causing the violence in Waco.

While much has yet to be revealed regarding the specific details of the Waco shooting, including the names of those arrested, this incident uncovers the potential extreme hypocrisy at the root of both American policing and media coverage of crime.