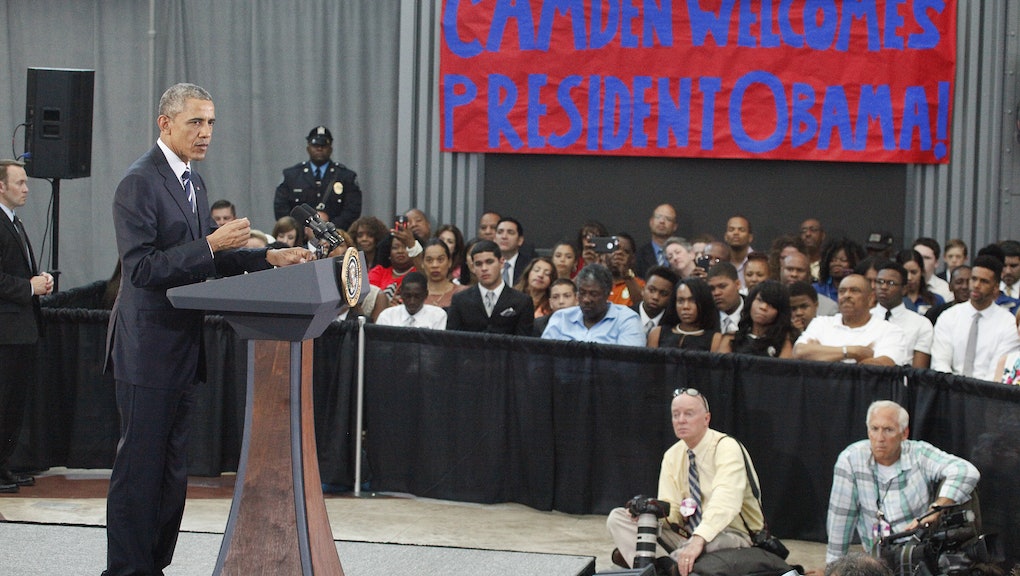 Obama's Hope for Community Policing in Camden Might Be Overly Audacious

By 17, I'd nearly perfected a hyper-masculine swag. I wasn't a bad kid, but one day my performance was convincing enough to bring about trouble from law enforcement.

It all began as I walked to my aunt's house in Camden, New Jersey, a small city that sits along the Delaware River opposite Philadelphia. I lived around the corner from my aunt at the time. While walking, I noticed a police cruiser picking up speed as it maneuvered down the street.

Cop cars were common in our neighborhood, so I didn't budge until it stopped directly next to me. Then, the lone cop inside — black, bald-headed and burly — yelled, "What are you doing? You think you're slick, don't you?"

He got out of the car and proceeded to grab my right arm. He then twisted my arm behind my back and pushed me against the brick wall of a house on the corner. Witnessing this all was Sam, my aunt's boyfriend, who had been walking to his van as the stop transpired. Sam tried to reason with the cop, but his assurance that I was a good kid did not prevent the cop from throwing me into the back seat of his cruiser. He drove off toward the police station, and Sam followed.

"What's your name and birthdate?" the cop asked. It was clear he thought I was a "lookout boy," the boy whose job was to warn the drug dealers on the corner that the "Po-Po" was nearby.

It was also clear he lacked a legitimate reason to make an arrest. Well aware of my rights, I didn't respond. The cop eventually pulled over about half a mile away from where I'd been stopped and let me go, but I was never able to let go of my newfound distrust of the police in Camden.

When President Barack Obama stopped in Camden to talk about community policing on Monday, this incident, and so many stories of police misconduct, came to mind.

Obama was in the city to discuss police reform and what he considers a "new model of community policing." According to the president, under this model officers must actually take time "get to know the residents" they serve — "to set up basketball games, to volunteer in schools, to participate in reading programs, to get to know the small business in the area."

In November 2012, the city of Camden began phasing out a police department it could no longer afford to manage. Law enforcement responsibilities shifted to the Camden County Metropolitan Police Department instead — a change some thought signaled a new direction toward less costly policing and overall improvement in the force. Yet today, some critics are not convinced these institutional changes have actually impacted the culture of over-policing permeating the expanded Camden police force.

Camden is home to roughly 77,000 residents. Nearly 40% of the population lives below poverty. A majority of its people are black and Latino people. Talk of police misconduct is common.

"The significant increase in low-level arrests and summonses, combined with what appears to be the absence of adequate accountability for excessive force complaints, raise serious concerns," Udi Ofer, the head of American Civil Liberties Union New Jersey, told the New York Times on Monday. He went on to say that petty offense arrests have "the potential to create a climate of fear, rather than respect."

Indeed, the climate of fear of which Ofer speaks has hampered police and community relations in similar spaces across the country.

The spate of killings of black people by police in cities like Baltimore and Ferguson, Missouri, makes this an important moment to talk about contemporary law enforcement approaches and their limitations. Camden's demographics and history make it an ideal location for this talk; Camden, like Baltimore and Ferguson, has a history of over-policing and misconduct. In fact, Camden's 1971 uprising was sparked by the killing of a Latino resident by police.

But despite talk of progress, Camden has a long way to go in terms of shoring up police and community relations. While Obama's poetic oratory (he began his speech by framing Camden as "symbol of promise for the nation") contrasted positively with the ways Camden has been described over the past several decades, the promise of which he spoke cannot be realized if it is contingent upon a restructured police department the ACLU-NJ still deems in need of improvement.

According to the New York Times, "the shift in Camden has been toward more arrests and tickets for low-level offenses such as riding a bicycle without a bell or lights, disorderly conduct and failure to maintain lights on a vehicle. And of the 65 complaints last year accusing the police of using excessive force, about two-thirds were dismissed by the department."

Obama touted Camden's decreased rates of violent crime and murder, as well as the diminishment of open-air drug markets, as successes, but these substantive wins must not come at the expense of violating residents' civil liberties, nor using quality-of-life policing as preventive measures. You cannot build rapport with city residents, as Obama notes, if communities feel over-policed for nonviolent offenses.

While there's more work to do to build bridges between police and city residents, Obama's visit might be cause for optimism. His commitment to curbing the distribution of military equipment from the federal government to local police forces and his noting the over-criminalization of people because of low-level drug offenses provided a glimmer of audacious hope that things will improve. But strong policies and reforms are needed to transform communities like Camden, which, as Obama stated during his speech, "have had the odds stacked against them for a very long time."

"The overwhelming majority of police officers are good and honest and fair," Obama said. "They care deeply about their communities. They put their lives on the line every day to keep them safe."

Yet we cannot forget that police officers in Camden were responsible for the cash-strapped city's payment of $3.5 million in damages to 88 people "whose convictions were overturned because of widespread corruption," according to a brief released by ACLU-NJ in 2013.

To fix Camden and, by extension, cities with similarly troubled relationships to the police, we must listen to more voices than just those emanating from within law enforcement. Too many Camden residents continue to feel unsafe on the streets, both in and out of the presence of police. Obama's return to the idea of "community policing" in his speech as a way toward reform is an important and necessary pivot that can only bring about results if the community is called upon as experts of their experiences and neighborhoods.