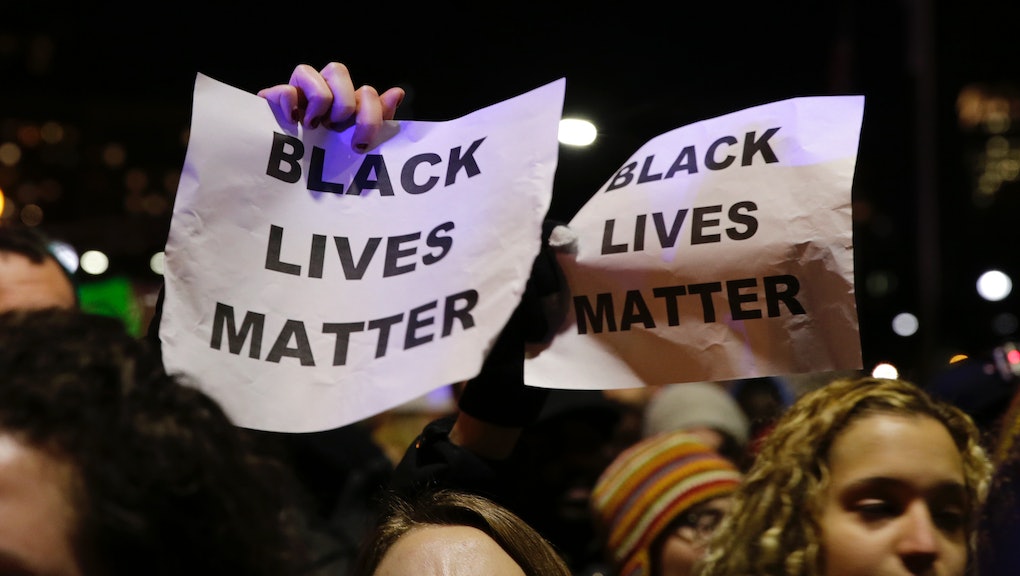 People across the country are taking part in a series of community actions Thursday with the purpose of elevating the experiences of black women and girls in the movement for black lives. The events are part of the first ever National Day of Action for Black Women and Girls, organized by the Black Youth Project 100, Ferguson Action and Black Lives Matter.

The event was spurred by the fact that movements against police brutality, state violence, overpolicing and racial supremacy often disregard the experiences of black women and girls.

"The reality is, when black, straight, cisgender men and boys are beaten, brutalized and/or murdered by the police or white supremacists, it becomes a national issue in the black community, and in a few instances ... the outrage moves beyond the black community," Aishah Shahidah Simmons, producer and director of No! The Rape Documentary, told Mic. "Today's actions are necessary and important interventions because they disrupt this narrative that violence against black cis and trans women are not also worthy of mass mobilization, protests and demands for accountability."

"The National Day of Action for Black Women and Girls is simultaneously historic and part of a long tradition of collectively remembering and having to remind the world the lives and experiences of black women and girls are essential to the freedom struggle. That we must do this again, on this day, is partly tragic," Salamishah and Scheherazade Tillet, cofounders of A Long Walk Home, told Mic.

Organizers hope the day's events will bring much-needed awareness to the precarious conditions black women in particular endure. These include:

Overpolicing and criminalization: Black women and girls, like black men and boys, are killed by police. Black women are incarcerated at nearly three times the rate of white women, and comprise a considerable portion of the nearly 1 million imprisoned black people in the U.S. In fact, 1 in 100 black women are in prison, according to the NAACP. Black girls are also suspended at higher rates than girls of any other race or ethnicity, and most boys, according to the U.S. Department of Education.

"Our demands can never be as simple as 'stop killing us.' When we begin and end at police killings, we miss the range of ways black women and girls experience police and state violence," Charlene Carruthers, national director of the Black Youth Project, an activist member-based organization of black 18- to 35-year-olds, told Mic.

Sexual assault at the hands of police: There are a range of issues beyond police killings disproportionately affecting black women. Sexual assault follows excessive force as the second most pervasive form of police misconduct, according to data reported by the Cato Institute; while the statistics do not relate exclusively to misconduct against black women, the fact that black women are overpoliced suggests they are likely disproportionately affected by sexual misconduct by law enforcement.

The widespread yet underreported murder of black trans women: Fifty-three percent of LGBTQ homicide victims in 2012 were transgender women, the National Coalition of Anti-Violence Programs reports. At least eight trans women have been killed this year. The most recent reported black trans victim was 21-year-old London Chanel, whose name has been invoked by organizer's at Thursday's events.

"You cannot say 'black lives matter,' but continue to be violent to black trans women," Lourdes Ashley Hunter, national director of the Trans Women of Color Collective, told Mic. "If we are ever to obtain collective liberation, it is critical for our movements to expand the narrative that all black lives matter not just with our words, but with actions."

The National Day of Action reminds us that any movement for justice for black people must be inclusive of black cis and trans women and girls.

"We will not remain silent. If we remain silent, who will march for us, who will speak for us?" Joanne Smith, executive director of Girls for Gender Equity, told Mic. "We are literally fighting for our lives when we demand that the deaths and atrocities against black girls and women in this country be made known and included in our nations racial justice fight of the 21st century. "