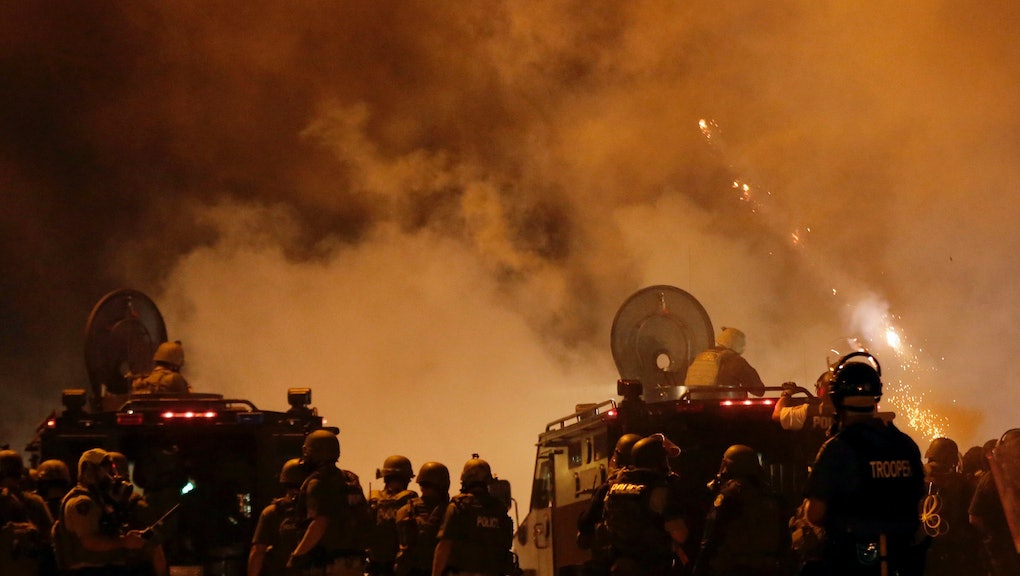 When citizens hit the streets of Baltimore and Ferguson, Missouri, to protest the deaths of Freddie Gray and Michael Brown, two young black men who died at the hands of law enforcement, police used tear gas and rubber bullets to control the crowds. Now they have a new non-lethal tool: stink bombs, also known as malodorants.

The weapon of choice in this case is called Skunk, and Defense One reports that a company called Mistral has been providing it to police departments feeling nervous about civil unrest.

How it works: Skunk is a yellow liquid made from baking soda, yeast and amino acids. The smell has been described as garbage, human waste, dirty socks, rotting meat and an open sewer. Mistral reps claim the smell can be removed from your body only with a "special soap."

There are a number of ways police can stink-bomb a protest or gathering. In 2008, the military drafted plans for an artillery shell that would explode in the air and carpet whole acres of land with a cluster of small, parachuting stink bombs. Skunk is much less sophisticated: Police can simply load it onto a truck and spray it as a mist from a hose.

Police tactics are growing more brutal: An increasing number of departments around the country have been arming themselves like the military as protest movements and civil unrest make local law enforcement officials nervous.

Some departments are now considering crowd-control tactics usually reserved for violent civilian conflicts. Skunk is notorious for its popularity with the Israeli Defense Force, which regularly uses stink bombs on Palestinian protesters. The IDF has said repeatedly it's only used Skunk when protesters get violent, but Palestinians have insisted that Skunk is used as collective punishment to discourage unrest.

Why the stench is so effective: Leaving a bad smell in the air might seem harmless compared to a more corrosive and aggressive form of riot control, such as tear gas, arrests or rubber bullets. But, as Defense One argues, making someone smell repulsive is a uniquely dehumanizing way of exercising control.

The poisoning of a place also serves as a ghastly method of desecration, destroying any will to reside, congregate, protest or even document a location until the owner of the weapon elects to clean it away. It is not only a means of crowd control but also, potentially, a system for maintaining new apartheids.

Until the news broke that Mistral was peddling stink bombs to local police forces, Mistral general manager Stephen Rust had bragged about Skunk's ability to "put [a specific target] in the dirt" during a protest or riot. But since then, Mistral has taken down the website where it sold Skunk canisters and grenades. The company has now stopped giving comment, except for this last tweet — its only public presence at all in the past month: