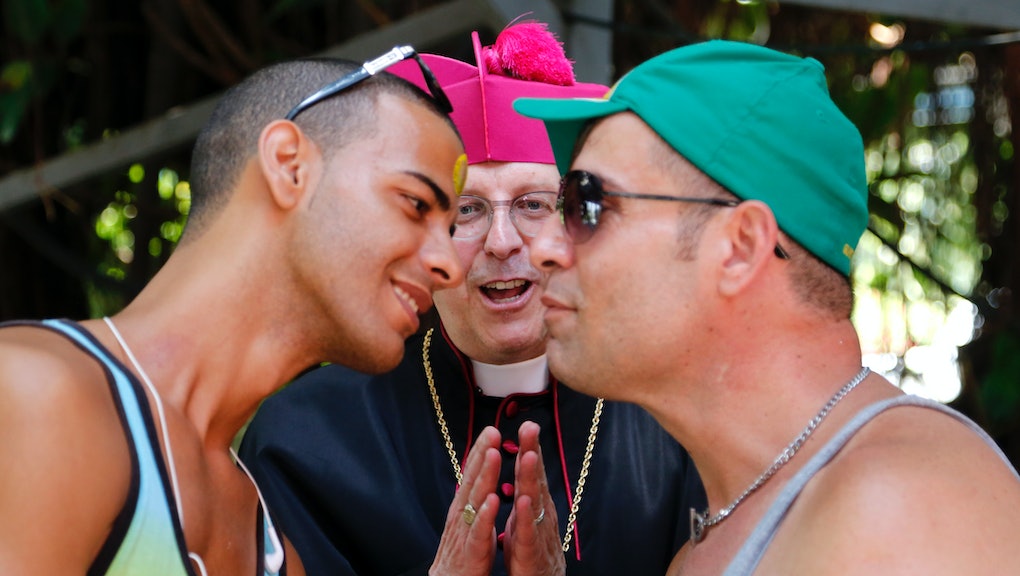 On a Friday afternoon 11 years ago, Alexander, then a 19-year-old college student, returned home after a full day of school, work and track practice to prepare for evening church service. His boyfriend at the time, annoyed that Alexander was leaving the house on a Friday night, began berating him. Words turned into physical violence.

"He followed me to the bathroom. He began to scream violently about how my priorities were out of order. Before I could respond, he had attacked me," Alexander told Mic in an email. "As I tried to restrain him, he began punching, kicking, biting and spitting on me ... I remember him vividly reaching for my face with his fingernails. My face was so badly scratched the deep pink layers of skin were unfolded and exposed, as if someone had cut into my face."

Alexander's experience is a jarring example of a kind of intimate partner violence IPV we don't often hear about: that between LGBTQ couples.

The National Domestic Violence Hotline reports that an average of 24 people per minute are victims of rape, physical violence or stalking by an intimate partner in the United States. But despite the tendency of media to report on IPV as if it were an issue affecting heterosexual couples exclusively, IPV affects people across lines of racial, gender, socio-economic and sexual identity. In fact, a 2010 survey by the Centers for Disease Control and Prevention revealed that "lesbians and gay men reported IPV and SV [sexual violence] over their lifetimes at levels equal to or higher than those of heterosexuals."

The fact that this kind of IPV so often goes unrecognized makes it more difficult for LGBTQ survivors to seek help.

"I did not have any support," Alexander said. "I did not seek help because I didn't know how. I feared exposing him — and myself. And, I was (am) a man. I felt that it would be beneath my manhood to share with anyone that I allowed another man to 'beat me.'"

So why is IPV among LGBTQ and gender non-conforming people seemingly ignored? For one thing, public responses to IPV are inevitably shaped by prevailing ideas of gender and sexual orientation: Masculine men are viewed as powerful aggressors, and feminine women are viewed as fragile and incapable of violence. Thus the invisibility of IPV among LGBTQ people in media and public discourse also illuminates a connection between sexism and homophobia; those with biases against LGBTQ people often maintain rigid ideas about the proper roles of men and women in society — roles that privilege men and subject women, and from which LGBTQ couples may deviate.

"The role of the aggressor and victim can't be easily determined by gender. Men are expected to fight men, so the violence within male/male relationships are written off as the assumption that the abused should be able to defend themselves," Danie Cooper, a trans masculine, two-spirited (a term used by indigenous cultures to describe a third gender) IPV survivor, told Mic.

Historically, women have also been seen as property of male partners who have been socialized to control them. This thinking is, in part, why IPV has often been viewed as a private domestic problem as opposed to a looming public health concern for straight and LGBTQ couples alike.

Expectations that men be strong and dominant and women weak and submissive can inhibit survivors from both recognizing abuse themselves and getting broader support.

"Even before I fully understood the dynamics of domestic abuse and how it's overlooked in same-sex partnerships, I knew that nobody would hear my story and think 'abuse.' I even fooled myself to believe we were just fighting, because two guys fighting is less embarrassing than being abused by your partner who also claims to love you," Jonas T. Cottingham, a gay IPV survivor, told Mic. "Who would feel sorry for me? Isn't that the risk you run when you partner two males who can be dominant?"

Restrictive ideas of gender can shape the ways LGBTQ couples relate too. "When lesbian couples prescribe to a heterosexual model, because it is the only model we learn for acceptable relationships, we are often subjugated to the limitations of the gender roles expected within this model," Lillian Rivera, director of advocacy and capacity building at Hetrick-Martin Institute, a national LGBTQ-advocacy organization, told Mic. "The 'masculine' presenting or acting partner is expected to exert their power and ensure that the 'feminine' presenting or acting partner. These limited roles don't allow for health relationship development."

Shifting IPV advocacy: Earlier this month, partners and WNBA players Brittney Griner and Glory Johnson were suspended without pay by the league for seven regular-season games after they were arrested for a domestic dispute in April. The case brought some much-needed attention to the pervasiveness of IPV among LGBT couples — something many advocates argue is vital to decrease the prevalence of IPV within LGBT relationships.

As Samantha Master wrote for Root, "LGBTQ people must be visible in anti-IPV campaigns and organizations that provide support for survivors of intimate-partner violence. These groups must also be culturally competent, affirming and well-versed in serving LGBTQ people." To that end, organizations like Anti-Violence Project and the Audre Lorde Project are especially important resources for those interested in thinking through the complexity of gender, sexuality, power and violence.

Indeed, shifting public perceptions regarding IPV among LGBTQ people will require a dramatic shift in the rigid ways we have been socialized to think about masculinity, femininity, victimhood, power and control.