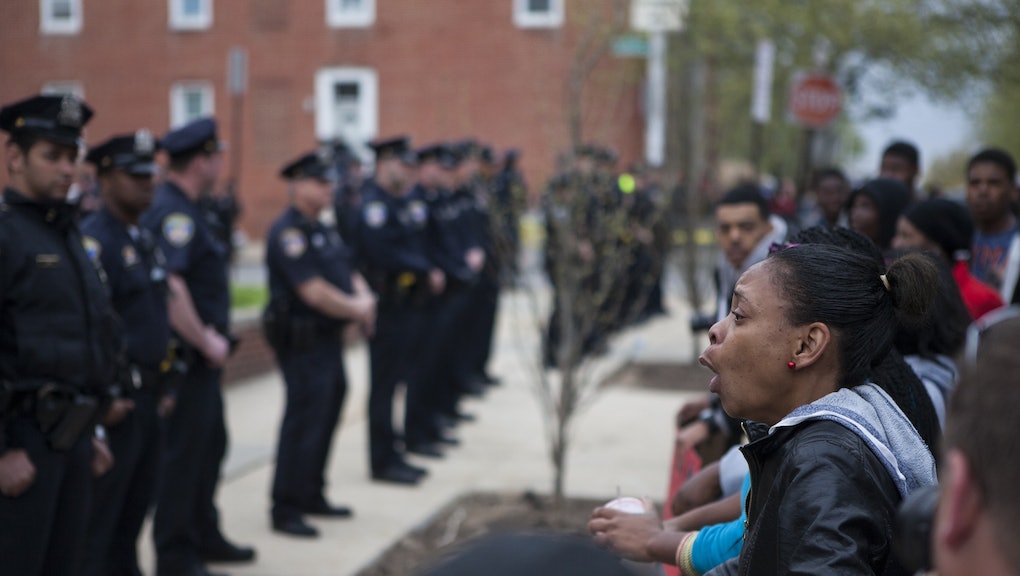 25 Shocking Facts About the Epidemic of Police Brutality in America

The recent unveiling of the Counted, a tracking system designed by the Guardian to count the number of civilians killed by police, has brought more attention to the seeming epidemic of police brutality in the U.S.

The tool comes at an important time. It seems every week new names of victims of police violence appear in the media. Twitter users often create hashtags to remember the fallen, many of whom are unarmed black victims, but activists can only recount so many heartrending stories of people killed by police.

Recent news coverage of high-profile shootings in places like Baltimore and Cleveland have arguably raised public awareness of the fact that police abuse is a problem, but without data, it is hard to make a strong case regarding what to do about the perpetuation of overpolicing and police abuse throughout the country.

Facts don't lie. The more the public is armed with facts, the better advocates can make the case for systemic overhauls. To that end, here are 25 actual facts about police brutality in America.

1. The number of people killed by police in 2014: 1,149, according to Mapping Police Violence, a research collaborative collecting data on police killings nationwide.

3. The percentage of those people who were women: 4.6%, or 22 people, according to the Guardian.

4. Of those women, the percentage who were women of color: roughly 41%, or 9 people, according to the Guardian.

5. The number of people killed by police so far in June: four.

6. The state where two of the four shootings took place this month: Texas.

8. The group as likely as black Americans to be killed by police, according to 1999-2013 data from the Centers for Disease Control and Prevention: Native Americans — like 30-year-old Allen Locke, who was killed by police in Rapid City, South Dakota, the day after he attended a #NativeLivesMatter Anti-Police Brutality Rally in December 2014.

9. The number of Latino people killed by police in 2015: 67, according the Guardian.

10: The percentage of those people who were unarmed, like 16-year-old Jessie Hernandez (killed by police in Denver in January): 25%.

11. The age of Aiyana Stanley-Jones, a black girl fatally shot by police as she slept on a couch in her family's Detroit home: 7.

12. The age of Tamir Rice, a black boy from Cleveland fatally shot by police while holding a fake gun in November 2014: 12.

14. In 2014, the state that led in police killings of civilians: California, according to KQED.

15. The number of states with zero police killings of civilians this year: four, according to the Guardian — North Dakota, Rhode Island, South Dakota and Vermont.

16. The state that ratified a tough immigration law in 2010, which critics have denounced as a doorway to profiling and overpolicing undocumented, and documented, Latino people: Arizona.

17. The city that has paid out a whooping $129.7 million between January 2011 and September 2014 to settle civil rights lawsuits against police: Chicago, according to the National Journal.

18. The number of full-time state and local law enforcement agency personnel according to the most recent Department of Justice data: 765,000.

19. The estimated number of black Americans now incarcerated in the U.S.: 1 million (of 2.3 million) according to the NAACP.

20. The number of officers involved in police misconduct cases in 2010: 6,613, according to the Cato Institute, a public research think tank behind the National Police Misconduct Reporting Project.

21. The number of police officers convicted of a crime for killing a black person while on duty in 2014: Zero, according to Mapping Police Violence.

22. The most common form of police misconduct in 2010: excessive force, according to the Cato Institute.

24. The hefty estimated costs associated with civil judgments and settlements related to misconduct-related cases in 2010: $346,512,800, according to the Cato Institute.