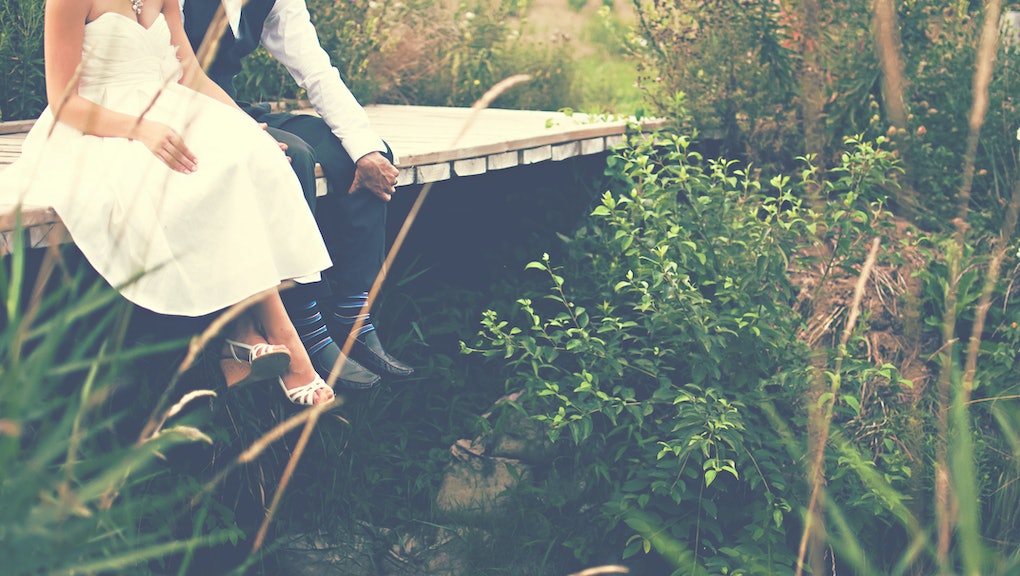 You're innocently scrolling through Facebook when it hits. "Wait, am I really supposed to be married right now?" you think, staring at the onslaught of wedding photos. Or, "Look at everyone with their fancy new degrees — should I have gone to grad school?"

The expectations are there — college, dating, settling down, marriage, kids. While it seems like a well-plotted path, the inevitably of each step is deceiving: Each are major decisions we have to make, and making those decisions can prompt a lot of doubt.

Is it worth it to even go to college anymore? Is getting married the right choice? Unfortunately, expectation and desire seem to be at odds for many of us, but the doubts that arise seem too taboo to discuss. "Among my generation in particular, there has developed an expectation that educated, career-oriented women deprioritize motherhood," Alana Massey wrote in Quartz. But what if we have doubts about prioritizing our work lives over something we might want more?

Having doubts when making major decisions is beyond normal — which is why we should feel safer voicing them aloud. After all, as we found from our Tumblr readers, we're sharing many of the same ones.

"Is this the person I imagined myself with?"

"After I graduated I think I worried a little about missing out on 'the single life.' Not because I wanted to be with anyone else or because I felt something was missing, I was very happy with our relationship, but I felt like I was missing out on a rite of passage with my friends in terms of going out and meeting guys, and sometimes had trouble relating to them."

"I guess I always imagined meeting someone with the same interests as me, but in fact my girlfriend and I have very different interests."

"My boyfriend is pretty much perfect for me. But sometimes I wonder whether I love him for him or because he fits the criteria I always thought I'd want in a boyfriend."

Why it's OK to doubt: There is no way of predicting who we should be with, if anybody. But wondering if we imagined ourselves with our current S.O.s is a good exercise in self-discovery; if we're happy in the relationship, we likely learned things about ourselves on the way there, right?

"Should I follow my passion or take a job for money?"

"If I should have followed my passion and become a writer and illustrator, thus risking financial instability, rather than taking the practical route and and shooting for being an Army nurse. I'll be good at my job but will I be really happy?"

"Going into law. I have a degree in history, English, and American literature. I adore these subjects but there's no jobs. I'm studying while working in a small but nationally recognized law firm. People dream of having my job but I don't really want it."

"That being an artist is harder than I first thought. What's more is that they don't believe you when say about how tough it is."

"For me, when we moved in together I had to take a job that wasn't my dream job. I mean, what happens if he gets hurt or our water heater blows up or something? I had to sacrifice for the other things I wanted, but I still think about it sometimes."

Why it's OK to doubt: Should we have taken the high-paying job just to pay off that crippling student loan debt? Just because a job pays well doesn't mean we'll be happy — and leaving that job might even makes us happier, as numerous stories prove. But going into an unproven field can be a risk, so sometimes boundaries are a necessary evil. Talking though which is better should never be off the table, no matter how far we get into our careers.

"Is now the right time to move in together — or is it out of convenience?"

"I moved in with my partner before I had a good job. While we were happy with the decision, I definitely felt pressure to do so because we'd been together for so long. It might have been nice to wait longer, to be settled in a career."

"Part of the decision to live together came out of not wanting to live with our parents. Did we really want to live with each other that early on?"

Why it's OK to doubt: Data shows that couples today tend to glide through relationship milestones in a non-deliberate way, including moving in together. That default "slide" is linked to to lower quality relationships in the long run. If we're having doubts, we should use them as a prompt to investigate our relationships.

"Do I bring enough to this relationship?"

"Being the female breadwinner, I am insecure about how my husband feels. Does he feel intimidated or that he's not providing? I don't care how much money he makes but does he?"

"I had doubts when moving into together because I make a lot less than my husband. I feel I need to do more to hold up my end of the bargain."

Why it's OK to doubt: It's common for people to feel inadequate when they bring less money into a relationship. But inevitably, one of us will make more than the other (and these days it may be the woman). Considering money is one of the biggest sources of tension in relationships, any doubts about income (or lack thereof) don't mean we necessarily need a better jobs — maybe we just need to up the communication.

"Is this really the right city for me?"

"Are you willing to move to a new country? I said yes, but it was hard."

"I have to start thinking of the future, even having to wonder which country might be the best for bringing up children in, or where will I earn the most money and get a stable career."

Why it's OK to doubt: We get comfortable in certain places, or feel the pressure to live in a bustling millennial hotspot like New York City or San Francisco. But we should remember that there's no time better than the present to make a move if we're not happy (as so many of our peers are doing).

"Do I really want to get married?"

"I don't feel in any way ready for kids or a mortgage, but I guess life is heading in that direction. It's scary, but it makes me realize how much I want to do in life before I have those extended commitments, saving money, spending money, seeing the world!"

"We had a big wedding, but we almost eloped. Weddings are expensive and with other expenses to think about, it was hard to spend that much on a wedding. But at the end of the day, other people would have been disappointed if they hadn't been included."

Why it's OK to doubt: Couples who slide into living together may actually end up marrying — "why not just get married?" is the likely logic. But it's worth thinking it through; having doubts about getting married doesn't mean we're with the wrong person, it just means we're thinking deliberately about the relationship, which can help its chances over time.

"Am I dating doing this dating thing right?"

"I still hope to find a guy with similar interests/sense of humour/ambition, etc. I am still attracted to the same 'type' physically and I still always end up with musicians of some sort, but do I need to step outside my comfort zone?"

"Dating is tough. I guess I would now just try to enjoy something while it lasts, and not be too broken if it doesn't work out. At the same time, I don't want to waste any more time with men who do not want the same things as me."

Why it's OK to doubt: We all have deal breakers. But are they guidelines to happiness or stumbling blocks? As Tracy More of Jezebel wrote, "pickiness is fine to a point, it seems, but if it prevents you from meeting new people or giving someone a chance who might be a great friend or mate, all because of some shallow physical attribute or cultural misstep, doesn't that make you a big asshole?" Maybe our doubts are trying to tell us something.

"Are my friends right for me?"

"Sometimes I wonder whether some of my friends really want me to be happy. I have a great relationship, but sometimes it feels like they don't support it, but it's not something I feel I can talk about with them."

"As I get older into my 20s, sometimes I fear that some of my best friends might not have the same interests as me. One likes rock climbing, the other needlepoints. When we get drinks, sometimes it can feel like we're not actually saying anything new to one another, we're just replaying our greatest hits. A part of that may be that I met them when I was a teenager. I'm not the same person anymore, so it's hard to realize they won't be either."

Why it's OK to doubt: We're expected to be there through thick and thin, because that's just what friends do. But at what point is it OK to cut a friend loose? It may be a taboo subject, but letting friends fall away is acceptable, and may actually be good for us mentally. The important thing is to analyze the friendship before letting it go completely.

"How much am I willing to break from my past to be happy now?"

"I was very doubtful of my decision to transition from female to male. I had a lot of internalized heteronormativity and it wasn't until I had decided for sure that I told anyone other than my closest friends."

"Choosing not to be Christian in a family line majorly dominated by Protestants and Christians."

Why it's OK to doubt: Caitlyn Jenner may be the prime example of self-doubt. It took her 65 years to show the world who she really is, but she proclaims to have never been happier. Doubt can help us examine the aspects of our lives that we're unhappy with — and determine how we can change them.