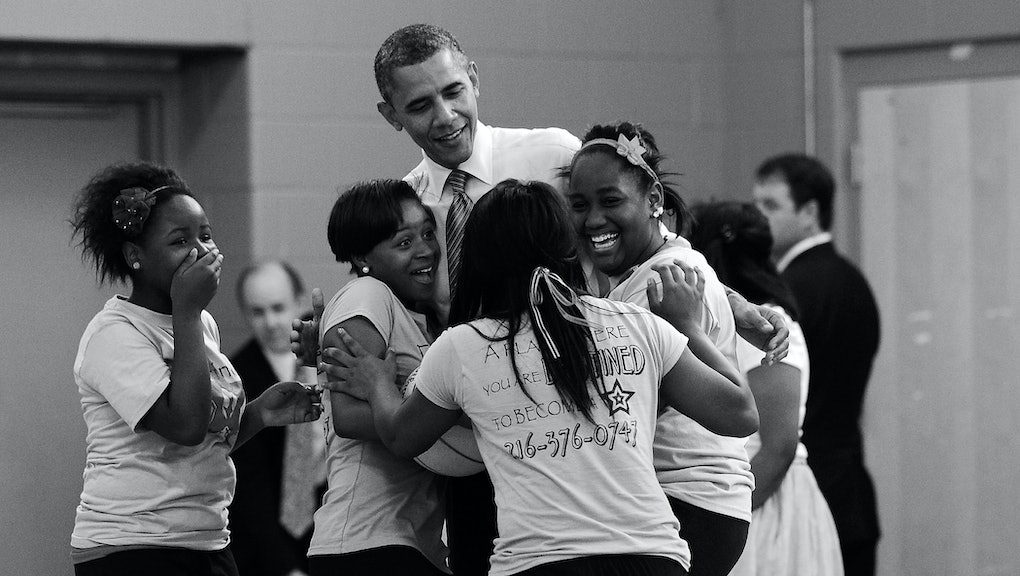 Black and Brown Girls Have a Powerful Message for America

New York — "It's OK to not be OK." Those empowering words concluded the testimony of a 16-year-old black girl speaking passionately about her challenges with mental health, during an event held Friday morning to address the specific needs of young women of color in the U.S.

The girl was one of 12 girls and women of color who presented their stories to an audience of nationally recognized social justice advocates and government officials during the event, which was organized by Girls for Gender Equity and the National Women's Law Center.

While the girls' personal narratives differed, each echoed a crucial point made by critics of President Barack Obama's My Brother's Keeper racial justice initiative: The lives of black and brown girls matter too.

"We planned this because girls of color are not doing OK. They actually have needs," Joanne N. Smith, founder and executive director of Girls for Gender Equity, told Mic.

"We must create the conditions that will allow them to self-advocate for their needs," Smith said. "We also need to create space for girls of color to be part of the process of determining what their needs are and implementing policies and projects in response."

The participants told the advocates at the session the kind of support they needed. Tee Emmanuel, a 21-year-gender nonconforming queer woman, for example, described being kicked out of her mother's home. Emmanuel eventually moved to another state, where she moved in with an abusive partner. When she finally decided to return to New York City to escape her relationship, she began sex work in Queens to survive. The adult who exploited and profited off her sex work was a woman.

"I wanted out, but I felt like I had no choice. I needed to survive. Survival sex is real," Emmanuel shared with the group as she wept. "We need more programs and organizational support for girls of color like me."

Women and girls of color, like Emmanuel, face a range of obstacles in the U.S. Black women have the highest rates of HIV among women; black and Latina teens are more likely than white teens to be pregnant; black women were incarcerated at nearly three times the rate of white women in 2010; and black girls are suspended at higher rates than any group of other girls.

Many of the youth participants provided real-life examples of the ways these conditions shape their lives. One 13-year-old shared how she is often cat-called when walking the streets of her neighborhood. A 24-year-old Korean woman disclosed she had been sexually assaulted throughout her life — the first time at age 6.

The advocates and government officials in the room were challenged to carry their stories back to their respective organizations. They were encouraged to center the needs of girls of color as they continue to create educational, economic and racial justice policies and programs.

"For so long the myth that young women and girls of color are doing 'just fine' has been the basis of gender and racial equity advocacy," Nakisha Lewis, an attendee of the session and senior strategist at Ms. Foundation for Women, told Mic. "Because of this belief, programs supporting young women and gender nonconforming youth of color have gone under funded and under resourced.

"The stories shared by these young women remind us that the issues impacting young women of color require an urgent response."

The young women exhibited courage in the face of the obstacles they should not have to overcome, but they cannot transform the harmful conditions affecting them alone. Their testimonies are reminders that when addressing racial justice, the needs of women and girls can't wait.