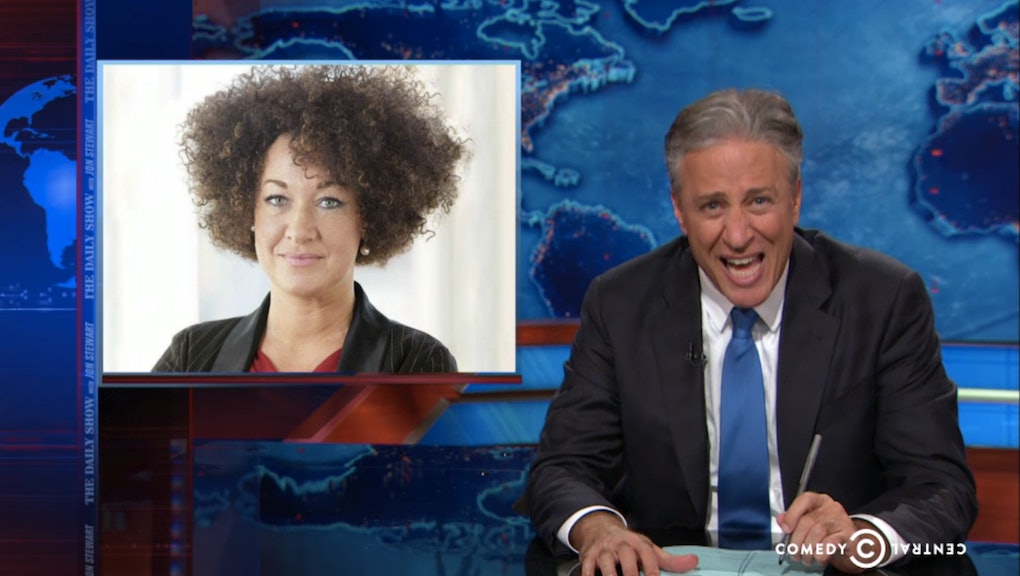 Comedian and Daily Show host Jon Stewart reminded everyone why he'll be so missed when he leaves his show in August.

On Monday, Stewart tackled a subject that has been on everyone's lips for days: Rachel Dolezal. The Daily Show host approached the issue in a segment appropriately titled "Whaaaaaaaat!?"

Dolezal, the former NAACP chief of Spokane, Washington, ignited a firestorm after revelations that she spent years living as a black woman despite being born to white parents of Czech, Swedish and German descent. It was a mix Stewart bluntly called "really fucking white."

Stewart, who also said Dolezal's case was a "singular incident," took the media to task for shoving her story into the predictable 24-hour news cycle which Stewart described as the "Benghazi Obamaphone culture war dog whistle who-gives-a-fuck-a-thon." To a montage featuring a parade of Fox News columnists offering sweeping generalizations and proclaiming how the case showed racism must be over, Stewart offered the perfect response.

To drive the point home, Stewart moved onto a segment with his "senior black correspondent" — the very white Jordan Klepper. Klepper rushed on stage late, saying he was delayed because cops pulled him over on his way to the studio for "driving while black." In back-and-forth with Stewart, Klepper insisted he was black, and when challenged by Stewart, he complained about the unfair treatment between the races in America.

The segment was saved, however, when actual black correspondent Jessica Williams took the stage and drove the message home. Speaking to Stewart, Williams nailed exactly what was wrong with what Dolezal had done.

In a few brief minutes, Stewart and his team hit numerous points about Dolezal and of blackness in America that few others have been able to put as succinctly. Any claim that racism is dead because a single white woman wanted to be black is easily refuted by the facts. Black people earn less money than whites; they have more student debt and lower levels of wealth.

While it is admirable that Dolezal wanted to help black people, she could have easily done it as a white woman. For Dolezal, choosing to be black was itself a function of racial privilege that would never allow, say, Williams to pretend that she was white.