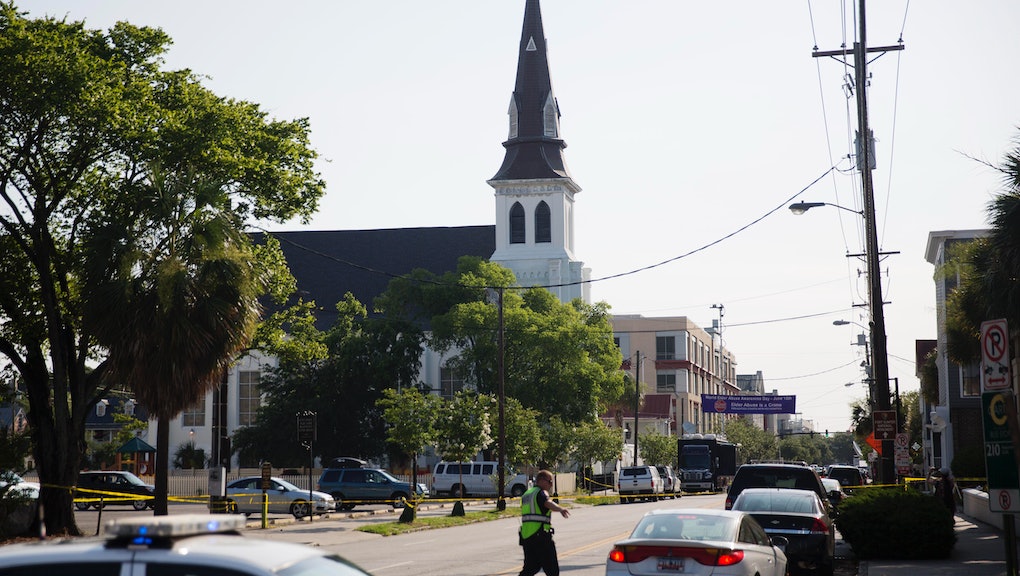 On Wednesday evening, nine black parishioners of the historic Emanuel African Methodist Episcopal Church (called Mother Emanuel by parishioners) in Charleston, South Carolina, were fatally shot by a white gunman during prayer. The victims were six women and three men, including Clementa Pinckney, the pastor of the church and a South Carolina state senator.

"That the doors of Emanuel AME church were open to the stranger to join in prayer and study reminds us of the deep and abiding love that faith makes possible," the Rev. Leslie Callahan of St. Paul's Baptist Church in Philadelphia, told Mic. "That the shooter used that openness to perpetrate unspeakable violence reminds us that the hate is deep too."

This mass shooting is a form of domestic terrorism that has historic roots in the U.S., especially the South. Black churches have long been targeted by white racial supremacists because they tend to serve as the political and organizing base within black communities.

Wednesday night's fatal shooting, like the many bomb and arson attacks that preceded it, are strategic terrorist acts meant to send a stinging message to black communities — namely, that black people aren't protected from the ferocious force of white racial supremacist violence even in the house of their God. But there are many accounts throughout U.S. history that serve as reminders that the fight for collective liberation in black communities has been sparked by calamity.

The history of Mother Emanuel itself is one of resistance. According to its own historical account, the church was investigated in 1822 after Denmark Vesey, one of its founders, began organizing a slave rebellion. The original church was eventually burned to the ground, ostensibly in response to Vesey's involvement, but rebuilt in 1834 — at a time when black churches were outlawed in Charleston. Members met clandestinely until 1865.

Black people aren't protected from the ferocious force of white racial supremacist violence even in the house of their God.

The bombing of the 16th Street Baptist Church was but another spark that flamed the spirit of the civil rights movement. Perhaps Wednesday's shooting will spark unrest too. Perhaps the parishioners of Mother Emanuel will find themselves stronger than before, or have another reason to continue to fight in this current movement for black lives. But black victims of hate crimes should not have to exercise resiliency in the face of the everyday violence of anti-black hatred; resilience is only evidence of the fact there exists something black people must constantly push against. The nation should be mourning and black people should have the space to mourn — and not fight — too.

I've spent many days of my life worshipping and ministering in black churches. Every church I've attended has been a site where faith in future justice gave members just enough strength to deal with the injustices faced in the "here and now." Our moments of fellowship, especially the many times we gathered to pray about the impact of economic deprivation, political disenfranchisement and racial antagonism in community, was a form of spiritual resistance.

The danger of white racial supremacy is its cunning ability to turn some white people into narcissistic sadists. And Wednesday, some white man walked into a sacred space to wield his power by ending the life of nine black people, as if he were God.