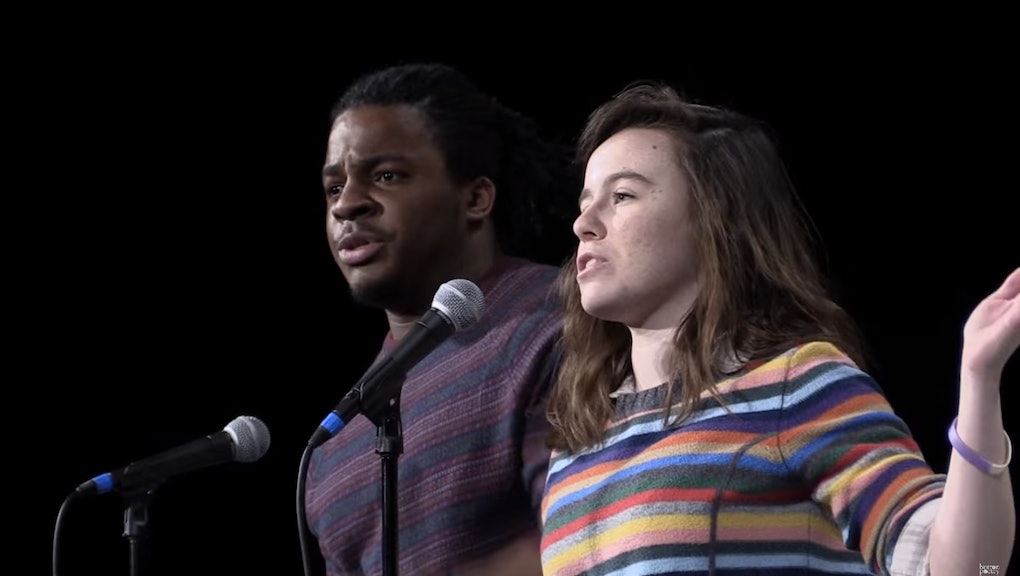 It's not easy to talk about privilege, especially when you're trying to be someone's political ally.

Darius Simpson, a black man, and Scout Bostley, a white woman, are both students and poets at Eastern Michigan University. During their joint spoken word performance at the 2015 College Unions Poetry Slam Invitational, they demonstrated just how thin the line is between supporting someone with a marginalized identity and speaking for that person.

First, they switch places on stage and begin to make their point even before they say a word.

Then, Bostley, the white woman, begins to tell a story from Simpson's perspective. She starts with, "The first time I realized I was black..." and recounts a horrifying experience from second grade of being chased into the woods by white classmates who were chanting "Slave!" Simpson looks on, surprised, before silently mouthing the words to his own story. It's Bostley's voice that the audience hears.

Next, Simpson begins telling Bostley's story: "As a woman ... having a boyfriend is a battle." Bostley looks on, grasping her throat, as Simpson goes into detail about the 70% of women who experience sexual abuse in their lifetimes.

The two continue to tell one another's stories: the racist dating mishaps, the "little ladies" of everyday street harassment, the white woman who says she knows what it feels like to be black because she grew up poor. Then they both speak loudly into the microphone: "To tell me you know my pain is to stab yourself in the leg because you saw me get shot. We have two different wounds, and looking at yours does nothing to heal mine."

Finally, they both drive their points home. "Movements are driven by passion," Simpson says. "Not by asserting yourself dominant in a world that already puts you there."

"You speak to know pain you only fathom because we told you it was there," they both chant. "You know nothing of silence until someone who cannot know your pain tells you how to fix it."

Allies are always important in political movements, but must always speak from their own experience, not anyone else's (sorry, Rachel Dolezal).

Eventually, both poets reclaim their original spots on stage. "The problem with speaking up for each other," they say, "is that everyone is left without a voice."