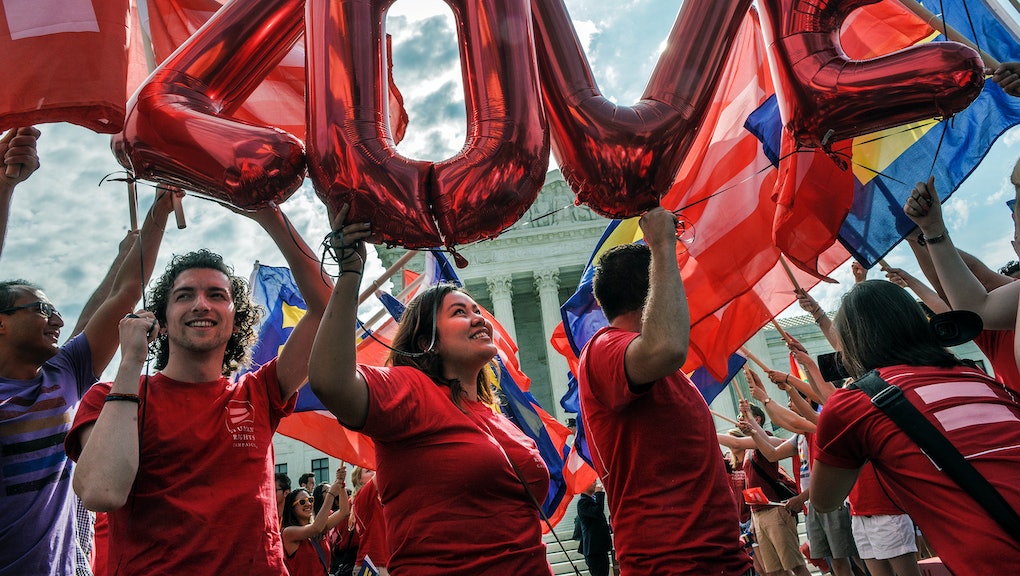 The Supreme Court established legal marriage rights for same-sex couples nationwide on Friday with a 5-4 decision, which means we can stop separating love based on gender. To sum it all up:

Put simply, love is love. But Friday's Supreme Court ruling is about much more than that. While it's always weird to have the state legislate matters of the heart, the battle over same-sex marriage was also about the much more technical aspects of building a life with someone: not having your children snatched away by the state, being at a partner's bedside as they lie sick or dying, not having to pay hundreds of thousands of dollars in estate taxes if that person does actually die.

These and more than a thousand more rights, benefits and responsibilities can be extended to same-sex couples from sea to shining sea with this decision. Marriage equality won't be the end of discrimination for LGBTQ people, but it is part of a decades-long fight for same-sex couples to be recognized for what they are: human.

The fight for relationship recognition goes back decades, even before the first known legal attempt to establish a same-sex marriage in 1971, turned down by the U.S. Supreme Court in 1972. The movement for marriage equality slowed drastically in the 1980's as the LGBT community was ravaged by the AIDS epidemic, according to to analysis by Lyle Dennison on the Supreme Court's blog. Amid attempts at relationship recognition, same-sex couples entered domestic partnerships and civil unions, stop-gap measures that, for most, did not feel like full equality. It was only in 2004 when Massachusetts became the first state to allow same-sex couples to marry. It was a move that, coupled with then-San Francisco Mayor Gavin Newsom's decision to wed same-sex couples at City Hall that same year, pushed same-sex marriage onto the national stage. In the last decade, the debate over same-sex marriage has gone back and forth between states that have instituted bans, to voter-led propositions and lower court decisions to legalize such unions. Today, the Supreme Court finally settled the matter once and for all.