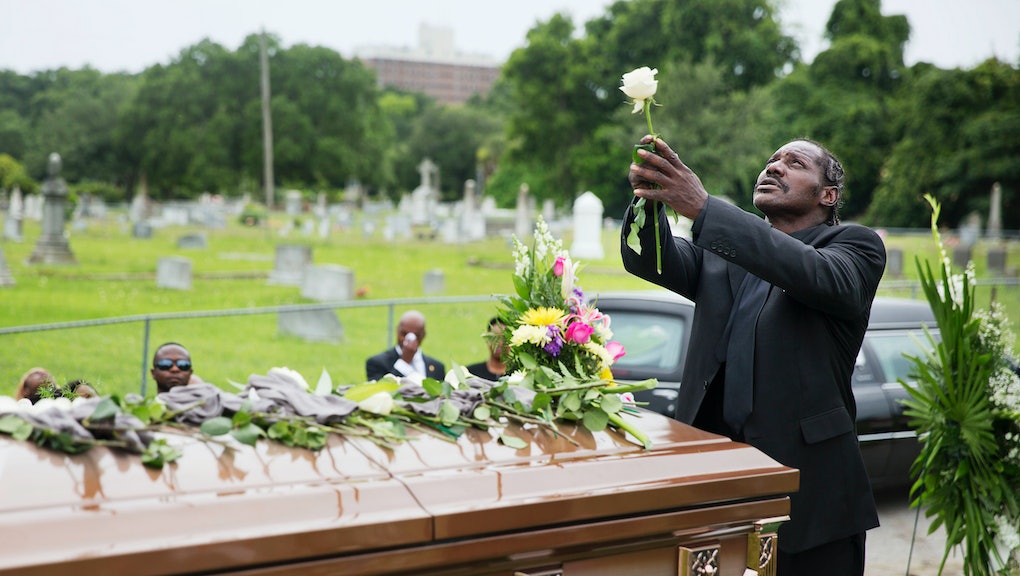 I Am Black and Gay, But I Refuse to Be Proud This Weekend

The Supreme Court ruled in favor of same-sex marriage Friday and I should be euphoric. But I am not.

I am enraged. The coffin of the Rev. Clementa Pinckney, South Carolina state senator and the pastor of the Emanuel African Methodist Episcopal Church in Charleston, South Carolina, will be buried Friday. Eight other coffins — flanked by grieving loved ones, covered with meticulously arranged flowers and filled with the lifeless bodies of black people shot by a white racial supremacist wielding a .45-caliber Glock — will be transported from "Mother Emanuel" to a graveyard throughout the coming week.

On June 17, Cynthia Hurd, 54; Susie Jackson, 87; Ethel Lance, 70; DePayne Middleton Doctor, 49; Clementa Pinckney, 41; Tywanza Sanders, 26; Daniel Simmons Sr., 74; Sharonda Coleman-Singleton, 45; and Myra Thompson, 59, faced a savage death not unlike that of black folk before them who were lynched or assaulted because of the color of their skin.

While so many Americans shed joyful tears because same-sex marriage has been ruled constitutional at last, once-alive black bodies will be placed in the dirt.

I am gay. I understand the historic importance of this moment. But I know, whether I am legally married or not, the rainbow flag of LGBTQ equality will never shield my black body from a reckless police officer's bullet. I cannot summon enough pride to prevent my black, gay body from being the target of white racial supremacy. I cannot selectively choose which fight I can show up for, because mere survival requires me to fight for racial, sexual, gender, economic and social justice at once.

That is why this otherwise celebratory moment feels bittersweet. To be honest, mostly bitter. I've been here before. When the Supreme Court gutted the historic Voting Rights Act in 2013, an act originally ratified because of the work of black leaders who fought to prevent racial discrimination in voting, I was incensed in a way many of my white LGBTQ friends were not. I was hoping for queer outrage, but confronted apathy. Then again, I never expected big protests or social media campaigns; the "movement" might care about my queerness, but it certainly does not value my blackness.

I cannot summon enough pride to prevent my black, gay body from being the target of white racial supremacy.

The LGBTQ movement has been likened to the black civil rights movement of our past, with "gay" even being called the "new black" ("black," in this summation, serving as a synonym for "lack" — a lack of access and rights). Thus gay liberation has often been fueled by the rhetoric of black liberation. In April, for example, joyful proponents of same-sex marriage gathered outside of the nation's highest court, singing "We Shall Overcome." But I wonder, who is the "we" they imagine?

It was convenient for same-sex marriage advocates to position the fight for LGBTQ liberation as the "new black," only until it began winning victories. The trope of blackness doesn't necessarily work as a metaphor in the current iteration of the LGBTQ movement, because "black" never signified progress in the queer imagination. Gay was only the "new black" when gay people were denied equal protections and privileges under the law. And as the LGBTQ movement wins victories like same-sex marriage, black folks, including black LGBTQ folks, are still engaged in a struggle for our lives.

I refuse to take pride in a "movement" singularly invested in gay liberation while black and brown folk continue to die at the hands of the state and white vigilantes. LGBTQ celebration should not overshadow the tragedy of black death and inequity. Not while white LGBTQ people refuse to confront the anti-black racism within their liberal communities. Not while marriage equality work can amass more money than programming for trans women of color and LGBTQ youth. Not while undocumented LGBTQ people continue to be detained and abused by the state. Not while I must daily argue for the mattering of black lives.

Same-sex marriage is a win. The mattering of black lives is a loss. Now how will the LGBTQ movement respond to this equation of injustice?