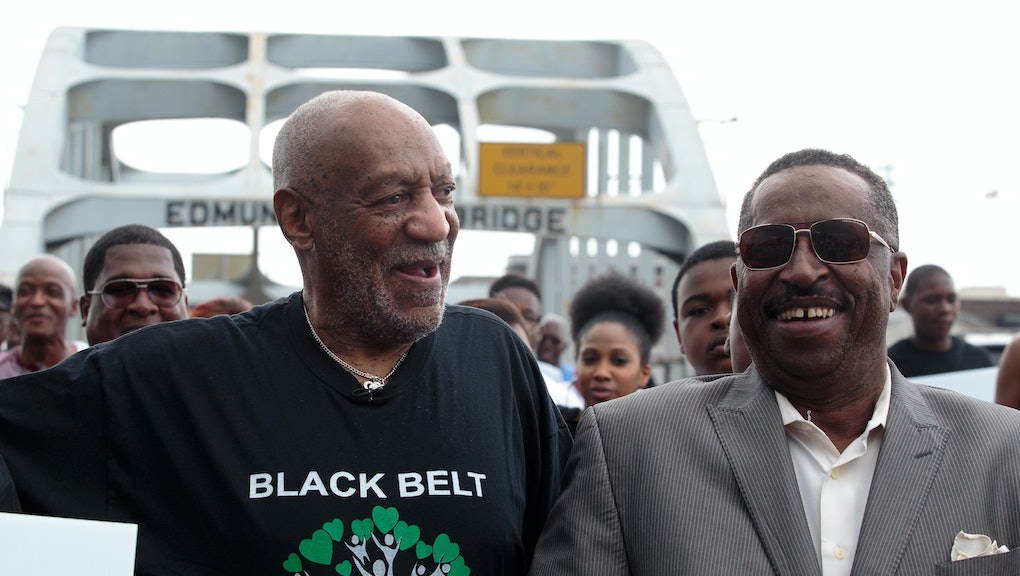 After trailblazing black model and actress Beverly Johnson publicly alleged in an emotional and stirring Vanity Fair essay that she, too, had been sexually assaulted by Bill Cosby, she was ridiculed and discredited by many.

The backlash wasn't surprising. Devoted fans and celebrity friends of Cosby have long stood by the beloved symbol of (caricatured) black heterosexual manhood, even as the list of women accusing him of sexual assault has grown to include more than 40 names.

After Johnson's story ran, for example, black male commentator Cleo Manago postulated that Cosby might actually be the victim of an ostensible white-woman coup to take a good black man down, or of the "guilty until proven guilty" rhetoric historically aimed at black men. Boyce Watkins, a black scholar and social commentator, expressed similar views, noting that while his thoughts about Cosby were "deliberately mixed," the growing number of allegations were akin to a "modern day lynching" and "too consistent and orchestrated ... to believe that it's all happening by chance." Attorney Monique Pressley similarly questioned the "sheer volume of accusers" and stated "you'll have some people who will come forward and join the band wagon" during a News One Now Straight Talk episode with Roland Martin.

The support of Cosby by black men and women who might otherwise consider themselves freedom fighters in the struggle for black liberation has been perplexing at best and hypocritical at worst, especially when considering that some of Cosby's alleged victims were black, too. It reveals the dangerous limitations of a black politic of liberation that is concerned with white racial supremacy but not cued into the violent reality of intra-community misogyny and sexual assault. This lack of dual focus has harmed black women throughout history.

To be fair, U.S. history provides much proof of the extent to which white people, and the state, have gone to protect white women from the archetypal dangerous black male. But Cosby's case should not be upheld as a contemporary example of white supremacy's attempt to take down a black man, especially not now that Cosby has admitted in court documents dating back to 2005 that he obtained prescription Quaaludes for women he wanted to coerce into having sex with him. Cosby is no Emmett Till.

Beverly Johnson, Lachelle Covington, Michelle Hurd, Angela Leslie and Jewel Allison are just some of the several dozen women Cosby allegedly abused. And they, just like those Cosby supporters who have claimed the sexual assault allegations are a consequence of white media's fascination with the demise of the black man, are black. In the case of those black people who publicly fight in support of Cosby, loyalty to race thus seems to also be an implicit allegiance to the cult of black patriarchy — black women's lives, well-being and safety be damned.

Cosby is no Emmett Till.

"Rape is more protected in this country than black women," Jamilah Lemieux writes at Ebony in response to the Cosby allegations. The disavowal of black women's experiences is a problem whose roots can be traced back to the sexual assault of black women in slave master's bedrooms, and continues with the dismissal of black women's pain in contemporary courts of public opinion and law.

Manago, Watkins, Pressley and others saw Cosby as a victim, but viewed the women who publicly shared painful stories of sexual violence as guilty of trying to take down a black man — one who, ironically, is notorious for disparaging black people.

A black freedom fighter who claims to care for all black lives but supports alleged rapists who harm black women is not truly fighting for freedom. Black women deserve a black liberation ethos that also destroys male dominance, sexual violence, rape culture, sexism and patriarchy, especially when these show up within black communities.