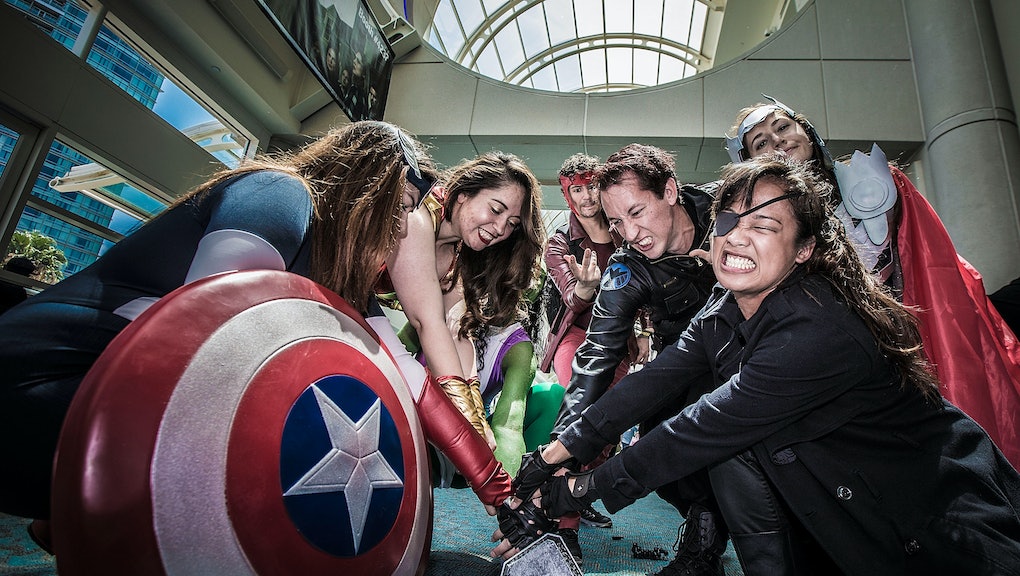 Comic-Con’s Neighbors Were Fed Up With Being Left Out, So They Did Something Incredible

Comic-Con International descended upon San Diego over the weekend. The annual comics conference draws tens of thousands of visitors decked out in cosplay (or taking photos with those who are) while waiting to see their favorite superheroes and creators. But after years of simply playing host to the fast-growing conference, residents of the city's historically Latino neighborhood Barrio Logan decided it was time to come up with heroes of their own.

The first-ever Chicano-Con kicked off this year. David Favela, a San Diego native and lifelong Comic-Con fan, told reporters that he's never actually been to the festival. One reason? The prices, which can reach $220 for adults. "I'm what you would call a frustrated Comic-Con fan," Favela told Public Radio International. "For many of us out there, it's very hard to get in. And it's pretty expensive if you want to take the family."

But there was another reason that Favela was turned off by the festival. Of the more than 60 shuttle stops around the city where attendees can catch a ride to Comic-con activities, not a single one was in Barrio Logan, whose more than 20,000 residents are largely working-class Latinos. The median income for the neighborhood's residents was slightly under $37,000 in 2011, compared to upwards of $60,000 for the city at large. But Favela saw a community performing everyday heroics under the radar in San Diego.

"It's not that we're mad at Comic-Con," Favela told PRI. "This community has a history. It was a dangerous place in the '80s. But there are kids here, there are working families here. I've been here for over a year and half and I've seen a community here. And I feel they don't get to participate in this city-wide phenomenon."

Enter Chicano-Con, which over the course of the first two weekends of July gave out free comics, food and plenty of Chicano-style art that celebrated the contributions of Mexican-American artists and dreamers.

The festivities took place at Border X Brewing, Favela's brewery and beer garden. "Border X supports creativity, literacy and good role models, so celebrating these in our first Chicano-Con event and handing out free comic books to kids to read this summer is exactly the kind of thing we exist to support," Favela wrote to the San Diego Free Press. "I struggled in an all-English school system, and comic books were my entry into English language and reading, which lead to greater mastery, education and eventually an MBA. Giving kids comic books is full circle for me, they changed my life and can change theirs too!"

The changing face of comics: Chicano-Con is just one example of how comic fans of color are fighting for — and winning — more visibility. The genre was long seen as a haven for white men, but increasingly women and people of color have gained an important foothold in the industry. Alongside Chicano-Con, San Diego also played host to Comic Conga, which featured the work of famed Mexican-American illustrator Lalo Alcaraz and a panel on women of color in comics that included Jamie Broadnax, founder of Black Girl Nerds.

On a larger scale, Marvel Comics introduced Miles Morales, a biracial black and Latino character, to play the new Spider-Man:

Marvel's executive editor Tom Brevoort talked about the characters at this year's Comic-Con."Really, and we mean this genuinely, it's only the beginning," Brevoort said, according to Polygon. "We talk about the need for greater diversity in our cast and in our writers all the time. We don't want to just throw stuff out there, so it takes a certain amount of time to make things happen. But this is only the beginning."