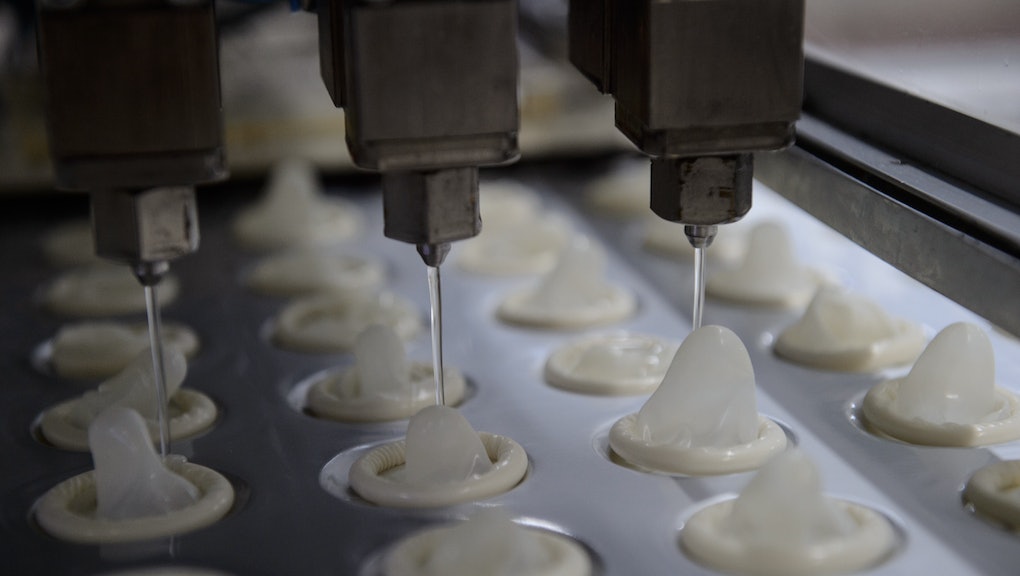 We've all heard the advice: no glove, no love. Don't be silly, wrap your willy. Cover your stump before you hump. Basically, wear a condom.

Well, unless you're in a committed relationship. Or on birth control. Of if you've both been tested in the past three to six months. Wait, what?

We know using a condom is the safest of safe bets: They're almost 98% effective, if used correctly every time you have sex. But we also know they're widely reviled, and plenty of us don't use them at all (1 in 4 teen guys and almost 4 in 10 teen girls, according to the Office of Adolescent Health). But not using a condom is accompanied by existential dread and guilt, an assemblage of anxieties specific to men and women, gay or straight, couples or one-night stands, STI+ individuals and those without.

In short, we know we're supposed to use condoms. But...

Behind closed doors, there are a lot more conversations around condom use — many sentences after that "but..." — than we typically let on. And those conversations can cause stress. "Sex is supposed to be a fun, stress-reducing experience; it's not supposed to leave you with crippling anxiety that you're pregnant or have a disease," Vogue's Karley Sciortino wrote.

Mic reached out to readers via Tumblr, Twitter and Facebook to uncover the condom conversations we're actually having — and to clarify some of the many questions and myths floating around.

1. "Is there anyone out there who actually likes wearing a condom?"

Prophylactics have a bad rep, largely because they've been made poorly for a number of years. For many, they've come to symbolize bad sex, encumbered sex — the less sexy sex.

"While many men are comfortable using condoms and in fact want to use condoms to prevent unwanted pregnancies and STI transmission, a recent study also indicates that the majority of young, single, heterosexual men report at least occasionally resisting condom use, even when their female partners want to use a condom," Kelly Cue Davis, research associate professor at the School of Social Work at the University of Washington, told Mic.

Most likely it's the overall sexual experience itself that will make the difference. As Julie Fennell, blogger and sex researcher, told Mic, "As a woman, I can honestly say that the best sex I've had with a condom has been better than the worst sex I've had without one, and I've talked to many men who have said the same."

2. "But really, how effective are condoms, exactly?"

The devil is in the details. As Hannah asks on Girls, "I was wondering about the stuff that gets up around the sides of condoms?"

Although condoms are theoretically 98% effective at preventing pregnancy, a 2012 study showed that male condoms account for about 20% of unplanned pregnancies in the United States. What gives? It's all about how you use them. The 98% stat is based on perfect use, and unfortunately most people aren't using condoms perfectly.

"We chronically underestimate how complicated condom use can be," University of Kentucky professor Richard Crosby, who co-authored a 2012 study on improper condom use, said in a press release. "It involves the use of a condom, while negotiating the condom use and sex with a partner all at the same time."

According to Crosby's research, the most common mistakes include putting a condom on in the midst of sex (presumably during a break in the action), taking it off too soon, not leaving enough room in the tip and not checking for prior damage.

So use it wisely, check for breakage, wear it from beginning to end and be sure to check that everything, uh, stayed inside.

3. "I'm having exclusive, partnered sex with someone who's been tested negative for STIs, and I have too. And I'm on birth control. Should I still use a condom?"

Provided you've been tested on a regular basis (although what counts as "regular" varies), it all comes down to how much you're willing to risk in terms of pregnancy. That can depend on what kind of birth control a woman's on, given that the odds of pregnancy are different for, say, intrauterine devices and the NuvaRing. That doesn't account for STIs, which birth control doesn't protect against anyway,

The question of whether you should use condoms with your partner may come down to trust. Do you trust that your partner is truthful about only sleeping with you, plus do you trust your method of birth control? If either of those answers is "no," it might not be time to give up the condoms quite yet.

4. "Does wanting to use a condom send the wrong message?"

As Jezebel's Hugo Schwyzer noted, "Condom use in long-term relationships symbolizes an absence of trust or a lack of total unity." Several 20-somethings confirmed the sentiment, with one 20-year-old male saying, "Having sex without a condom is a sign that you're committed."

But there are plenty of valid reasons to keep using condoms even when you're getting "serious." As sexologist Jill McDevitt pointed out in Cosmopolitan in an article titled "I'm Married and I Use Condoms — Get Over It, Trolls!" perhaps a woman can't be on hormonal birth control due to health issues, or maybe it's to simply cut cleanup time.

"Maybe they use condoms because they like condoms," she ventured. "Maybe they think the ones that have warming and cooling sensations, or ribbed ones with tingling lube, feel good and add to their sexual enjoyment."

As for the "sending the wrong message" from women to men? It's time to put to bed the myth that a girl who carries condoms is somehow sluttier. "Carrying condoms is cool, because it means you're a bad bitch who's in control of her life," wrote Sciortino on Vogue.

5. "If my same-sex partner and I are both STI-free, do I still need to wear one?"

Obviously with same-sex couples, pregnancy is not the looming issue. But there are other issues that arise. For LGBT men, the Centers for Disease Control and Prevention recommends more regular STI testing, as men who have sex with men are more likely to contract certain STIs, such as HIV.

6. "What's the deal with female condoms?"

Essentially, a female condom is a polyurethane sheath resembling an upside-down baggie that's inserted into a vagina before sex. It prevents the sperm from entering the vagina. One of the biggest benefits is that a woman can control it herself, meaning she doesn't have to request for someone else to put on the condom before sex. Plus, it can be put in up to eight hours before sex, so there's no need to stop mid-session to have a condom convo.

There are, surely, some downsides to female condoms. They are slightly more expensive than male condoms and their failure rate is higher. Most recent statistics show a 5% failure rates for perfect use, and 21% failure for typical use.

"The major problems with female condoms are that they can get bunched up inside the vagina during sex if you're not careful, or the man can miss the condom and accidentally go around it," said Fennell. As with male condoms, it's about being savvy and paying attention to using it right.

According to some experts, flavored condoms are just as safe as non-flavored for penetrative sex, so long as they are tested and approved.

"It is true that you tend to end up with artificial fruity-smelling genitalia after having sex with flavored condoms, but that isn't necessarily bad."

8. "But can't the whole condom process during sex be... kinda sexy?"

Why yes, yes it can. The moment the making out is interrupted with that one little, sexy question — "Do you have a condom?" — you know it's game on. And there's nothing sexier than owning a sexual situation and being in the zone with someone who turns you on.

If that's not a reason to use condoms, we don't know what is.