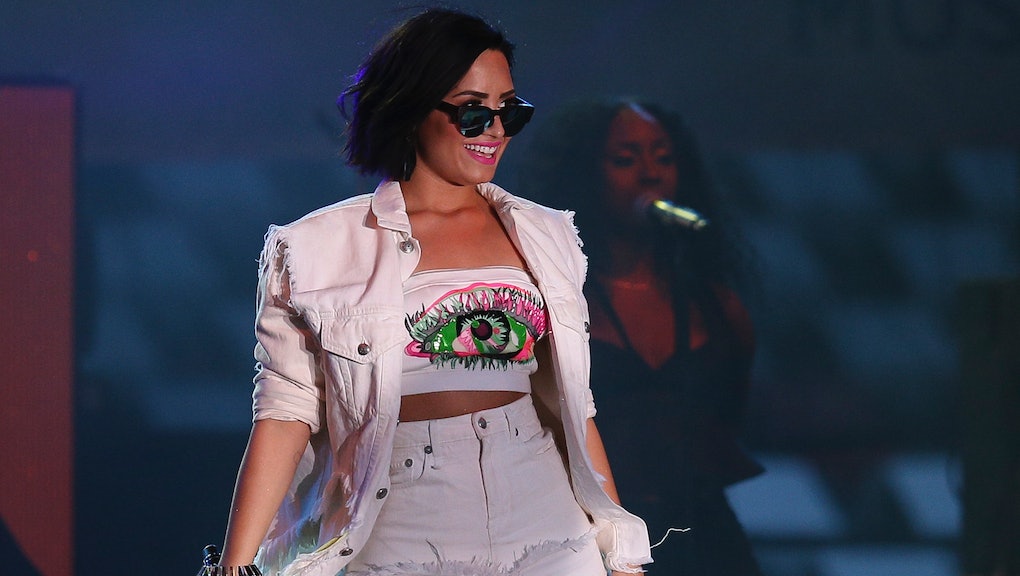 Fans Accuse Demi Lovato of Ripping Off Katy Perry — Can We Only Have One Bisexual Anthem?

Demi Lovato craved another woman's cherry; she took a bite and liked it, and she told the world about it on her latest single, "Cool for the Summer." It's everything a summer song should be: irresistibly danceable, lighthearted and flirtatious. But it's not held down by the strict gender binary most pop songs cater to. It celebrates a far more fluid expression of sexuality. And listeners are pissed — because Katy Perry did it first.

Since the single dropped July 1st, Perry fans have been vehemently accusing Lovato of ripping off Perry's 2008 hit, "I Kissed A Girl." But the songs really don't sound all that similar — or rather, they don't sound nearly as similar as so many other hits concurrently sitting pretty on the Hot 100. The only real point of contact is their shared theme of bisexual experimentation. But can there really only be one bisexual anthem in pop music? And if that's the case, should Perry's really beat out Lovato's?

Katy Perry fans can make waves. The pop princess has more Twitter followers than any other celebrity, and they came out in full force to show their dismay at Lovato's single.

But when publications like Star magazine and Entertainment Tonight started to pick up the story, Lovato defended herself admirably.

It's a fair point. In fact, Perry herself borrowed the bicurious theme from a 1995 Jill Sobule, also titled "I Kissed a Girl." Sobule's anthem offers far more woman-centric view of bisexual experimentation — and it's got a lot more sonic substance than Perry's bubblegum smash. That song "broke new ground as the first Top 40 hit to deal with overtly gay themes," according to TED. It was banned on many radio stations, but it endured as an anthem for the gay community. Her thoughts on Katy Perry borrowing the title of her track? "Fuck you Katy Perry, you fucking stupid, maybe 'not good for the gays,' title thieving, haven't heard much else, so not quite sure if you're talented, fucking little shit," she told The Rumpus in a tongue-and-cheek manner in 2009.

However, neither of the more recent songs depicts bisexuality in a well-rounded way. When Perry's "I Kissed a Girl" came out in 2008, it drew equal portions of celebration and flak from LGBT people and media. The song's critics argued that lines like "I hope my boyfriend / won't mind it" and "It's not what / Good girls do / Not how they should behave" tokenized female same-sex encounters in order to appeal to the lurid fantasies of straight male fans.

The song's music video drives home that point. "The absence of any kissing, while nice because that's one less titillation for the Male Gaze," writes Feministe, "drives the point home that this song and dance is really just about a male fantasy, having nothing to do with the desires of women."

Lovato's song is far less problematic... She hasn't dropped an official video for "Cool for the Summer," but its lyric video simply pairs the song with images of a fun pool party, with men and women of undefined sexual persuasions all having fun together.

The song's lyrics also suggest the possibilities far deeper sort of relationship beyond a momentary Girls Gone Wild-type fling. "Even if they judge / Fuck it / I'll do the time," Lovato sings, stating her determination to love whoever she wants despite the perceptions of a conservative society. "Kiss one another / Die for each other," Lovato sings, making it clear as a summer's day that bisexual love — often maligned as pure fantasy — is just real as any other form of attraction one might feel.

... but it's by no means immune to criticism. "You could argue that Lovato's message is too coded to be transgressive, or that it's a cop-out for her to relegate her same-sex desire to a secret summer fling," the Atlantic's Spencer Kornhaber wrote this week. He points out that the fact Lovato has allegedly had at least one non-heterosexual fling makes it a little easier to swallow, but it doesn't completely vindicate the song from the perception that it's exploiting a community Lovato has never officially identified with. Still, it's a far more inclusive anthem than Katy Perry's "I Kissed A Girl" will ever be. And in mainstream pop, there's so much room for more.