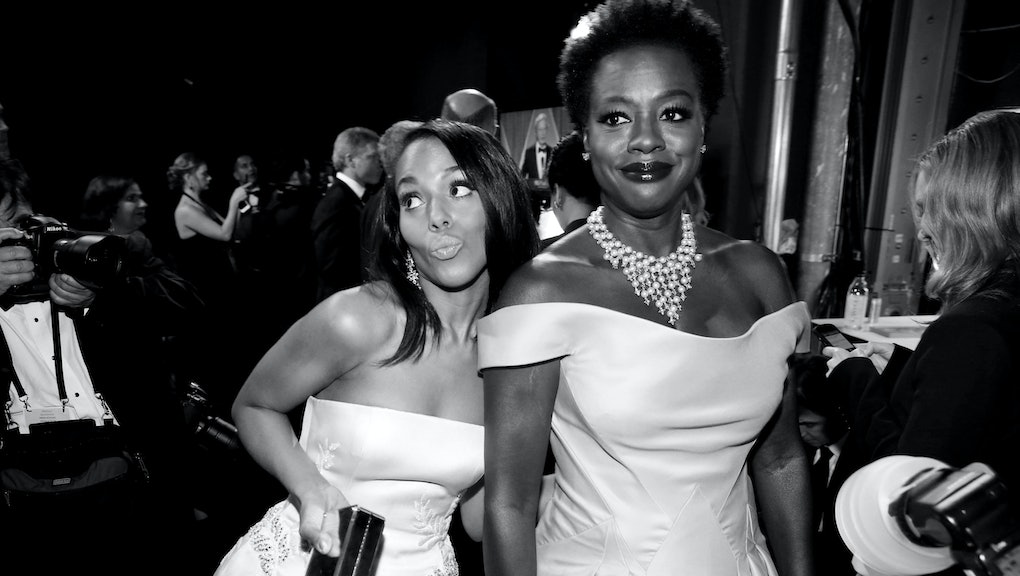 What the Evolution of Black Hair Says About White America Today

Kylie Jenner may not want to admit it, but black hair in America remains as politicized as ever. The teenage reality TV star was recently criticized on social media for rocking cornrows:

Jenner's photo prompted a discussion about the long trend of white people, willfully or blindly, appropriating black culture. That's when fellow teen star Amandla Stenberg publicly schooled Jenner on the finer points of cultural appropriation by commenting: "when u appropriate black features and culture but fail to use ur position of power to help black Americans by directing attention by directing attention to your wigs instead of police brutality of racism." For added affect, Stenberg added the then-trending hashtag: "#whitegirlsdoitbetter."

Jenner dismissed the criticism, but it certainly won't be the last time black women's hairstyles become white America's obsession. That's because black hair has always been a political statement in the United States. "Black women have long had to respond to social and physical violence against our bodies, attempts to discredit us as women, claim a range of expressions," Tanisha Ford, assistant professor of women and gender studies at the University of Massachusetts Amherst and author of the forthcoming book, Liberated Threads: Black women, Style and the Global Politics and Soul, told Mic. "In response to that violence, we've found greater ways of celebrating our own beauty, and natural hair has been a part of that. We continue to innovate new styles."

In fact, a quick look at the evolution of those styles over the years shows that black people are fly, resilient, and not wholly interested in teaching white folks about the ways of black cool. American popular culture is filled with direct and indirect black influences, but black creators don't always get the credit they deserve. So, here's some of that credit, and a century-long look at how the evolution of black hair and black people have influenced broader American culture.

Madam C.J. Walker became the first black woman millionaire in the U.S. thanks to the techniques she pioneered to manage black hair in the early 1900's. One of those techniques was the hot comb, which is used to straighten black women's hair. The technology's changed quite a bit in recent years, but the hot comb is still in use.

Also in the early 1900s, chemical mixtures were introduced that straightened black people's hair. While popular, the mixtures were often painful and dangerous due to its most potent ingredient, chemical lye. The process was dramatized in Spike Lee's 1992 film Malcolm X.

That didn't stop the era's biggest black performers, like James Brown, from rocking the styles for decades.

In the mid- to late 1960s, "natural" hair gained popularity in black communities. Naturals are hair that's not straightened by chemicals or heat, like dreadlocks or Afros. Men specifically jumped on the new trend without issue, because their close-cropped cuts could remain unobtrusive while natural.

But for women, the decision to wear their hair naturally was something else entirely. It defied traditional white standards of long, flowing straight hair, turning a fashion choice into a fashion — or political — statement.

The style was also fiercely political, in keeping with the "black is beautiful" mantra of the time.

Companies that specialized in black hair got in on the action, of course. In this commercial from AfroSheen, Frederick Douglass chides a young black man about keeping up a meticulously groomed Afro.

Yeah, it was weird.

The rise of Jheri curls

Jheri curls became popular during the 1980s as a sort of hybrid Afro and chemically relaxed hairstyle.

Braids emerged along with a renewed focus on Afrocentricity in black American communities in the late 1980s and 1990s.

Chemical straighteners, known colloquially as "perms," remained popular throughout the 20th century. But more information came out about how dangerous they were. One study found that perms were linked to uterine fibroids and early puberty.

That helps at least partially explain why naturals reemerged and have become one of the more popular black hairstyles today. The natural hair "movement," as it's sometimes called, has also led to a booming hair care industry that includes companies like Carol's Daughter, which was bought by L'Oreal after it filed for bankruptcy last year.

But not all naturals are treated equally. While the word "natural" has become a catchall phrase for black hair that's not chemically straightened, women who are lighter skinned and have looser curls are still held up as the standard for black beauty.

Why this matters: Black hair has always been the battlefield upon which America's most significant cultural wars have been waged. "It grows out of our flesh, but takes on this political meaning once it grows out of our hair," Ford told Mic. "We use hair to amplify ourselves."

The main takeaway: Cultural appropriation is never okay. What is okay? Celebrating black beauty in all its forms.