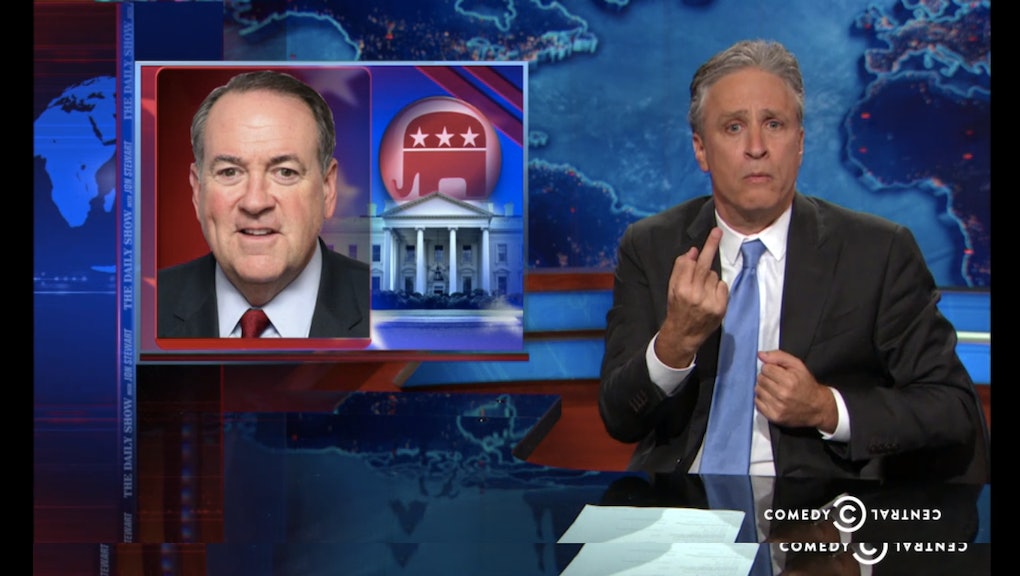 On Monday night's episode of the Daily Show, Jon Stewart had the perfect response to Republican presidential candidate Mike Huckabee's likening the Iran nuclear deal to the Holocaust: He was speechless.

During an interview Saturday, Huckabee likened the Obama administration's nuclear deal with Iran to the Holocaust: "This president's foreign policy is the most feckless in American history. It is so naive that he would trust the Iranians. By doing so, he will take the Israelis and march them to the door of the oven."

In response, Stewart compiled a segment on Huckabee by using the candidate's own words, clips of public figures' responses and, of course, ample facial expressions.

After playing Huckabee's controversial excerpt, Stewart stares at the camera in shock until the banner "URRRRGGGGHHHHHHHH" slides across the bottom of the screen.

Among the various pundits' and politicians' responses to the "oven door" comment the Daily Show played was Democratic presidential candidate Hillary Clinton's. "These are offensive and they have no place in our political dialogue. This steps over the line," Clinton said, to which Stewart, with gesticulations and expressions, conveys the sentiment: "Yeah!"

Despite Stewart's typical faux, naive optimism that Clinton's response, along with many others who condemned Huckabee, would put the issue to rest, Huckabee then double downed on his remarks.

Some pundits speculated Huckabee's remarks were part of Republican candidates' attempts at competing with Donald Trump, who has captivated the media's attention with seemingly fatuous comments such as describing Mexican immigrants as criminals and "rapists."

During President Barack Obama's visit to East Africa, he responded to Huckabee's Holocaust analogy during a press conference Monday morning from Ethiopia, describing it as "ridiculous," NBC reports.

Huckabee's remarks are "part of a general pattern that would be considered ridiculous if it weren't so sad," Obama said, adding, "presidential debates deserve better."

For now, Stewart just about said all there is to say.