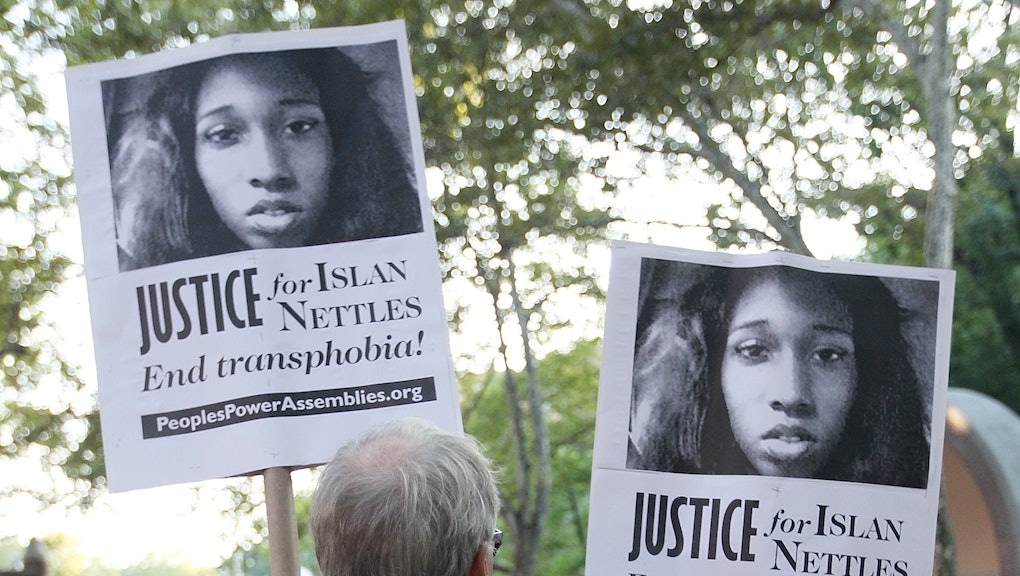 It's been one week since K.C. Haggard was brutally stabbed to death in Fresno, California. Haggard, who was 66 years old and identified as a transgender woman, is the latest in close to a dozen murders of trans women in the United States this year.

News of Haggard's death also coincided with the introduction of a wide-ranging bill aimed at expanding federal protections for LGBT Americans. Introduced by Sen. Jeff Merkley (D-Ore.) and Rep. David Cicilline (D-R.I.), the Equality Bill would provide the first-ever explicit federal protections for LGBT Americans across a broad range of public accommodations, including housing and jobs.

Days before the bill was introduced in Congress, Cicilline wrote a letter to colleagues urging them to support the effort. "In most states, a same-sex couple can get married on Saturday, post pictures on Facebook on Sunday, and then risk being fired from their job or kicked out of their apartment on Monday." Cicilline's point isn't just political rhetoric: Despite most Americans' belief that LGBT communities are legally protected from discrimination, queer people can be denied housing in 28 states. Some states, like Arkansas and Tennessee, have even used local laws to ban nondiscrimination efforts.

The bill's introduction was roundly applauded by LGBT advocates. Kris Hayashi, the executive director of the Transgender Law Center, said in a statement that the bill is "an important moment for the transgender community and a step towards ensuring everyone can earn a living, get an education and participate in public life without fear of discrimination based on their sexual orientation or gender identity."

Advocates tracking the murders of transgender women in recent years hope that the bill could help deal with the underlying issues that leave many transgender women at risk for violence. "When we look at violence, we also know there's more surrounding violence than just someone having bias against somebody," Chai Jindasurat, co-director of community organizing and public policy at the Anti-Violence Project, which tracks transgender murders, told Mic. "For trans people, they're placed at risk of violence because they're also at high risk of homelessness, violence, job discrimination." For those locked out of the mainstream economy because of transphobia, sex work places them at particular risk for sexual and physical assault, not to mention social stigma.

In the past few years, there have been close to two dozen known transgender women who've been found murdered in the United States. Cases like that of Islan Nettles, a 21-year-old woman who was beaten to death in Harlem, New York, received a degree of national attention thanks to the efforts of actress Laverne Cox, who carried Nettles' photo with her and also served as Grand Marshall of the 2014 New York City Pride Parade, alongside Nettles' mother.

There have been many others: in Los Angeles, Deshawnda "Ta-Ta" Sanchez, killed as she pounded on a building's door for help; Zoraida Ale Reyes, whose body was found outside of a Dairy Queen; Aniya Parker, who was shot in an apparent robbery. Tiffany Edwards was one of four transgender women who were killed in Ohio between 2012 and 2014, reported BuzzFeed's Dominic Holden.

How this bill can help: Transgender communities, particularly those of color, experience extreme levels of discrimination and poverty. Pulling transgender communities out of poverty — in part by prohibiting housing and job discrimination through the Equality Bill — may be one way to combat the deadly violence they're faced with in America. In a National Black Justice Coalition survey of black transgender Americans, 34% reported a household income of less than $10,000 per year. That's more than twice the rate for transgender people of all races, four times the rate for the general black population, and eight times the rate of poverty experienced broadly in the United States. The same survey also found that 41% of respondents had experienced homelessness, 32% had lost jobs due to discrimination and 46% responded being harassed at work.

As the transgender community has fought for and gained visibility in recent years, so too have the issues that impact them risen in the public consciousness. Back in February, transgender journalist Janet Mock addressed the violence facing trans women of color. "Trans women, particularly those of color, have always been targeted with violence," Mock wrote on her website. "The differences now? There are some systems in place that better report violence and there is finally visibility of a select few that helps challenge the media's framing of these women's lives."

The National Coalition of Anti-Violence Programs, for instance, is made up of a multi-state network of smaller groups who use mostly word of mouth and media reports to track the murders of transgender women. Jindasurat, whose Anti-Violence Project is part of that coalition, sees the Equality Act as a one step in a much longer process toward stopping the murders of transgender women. "Legislation has its limitations as to what it can do to stop violence against trans women," he told Mic, "but we also need to see a culture shift and a culture change."

That culture change is already underway.