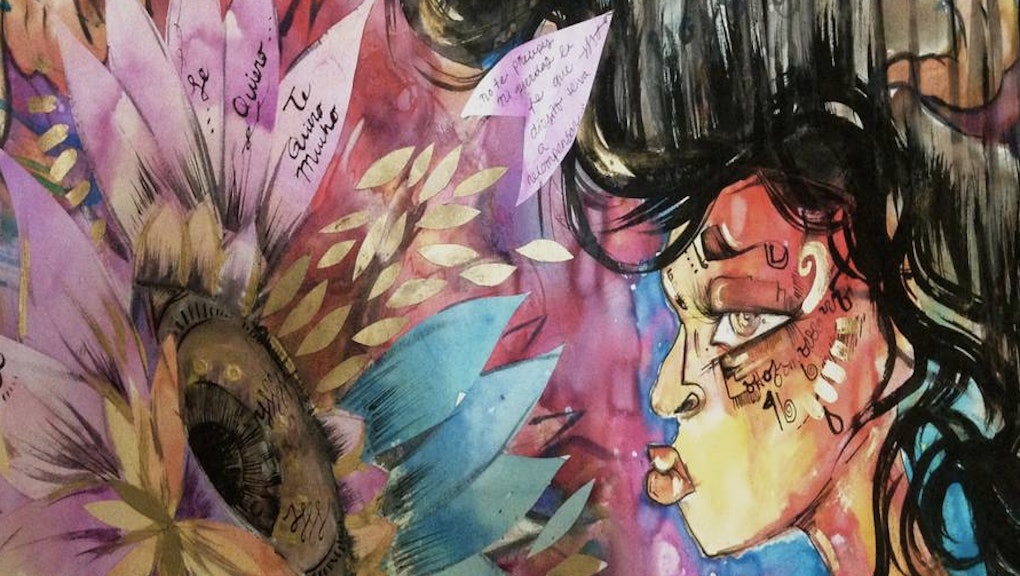 One year ago, horrifying images spread of what became known as the child migrant crisis: hundreds of children who'd fled violence and poverty in Central America, only to end up in cramped, cold detention centers in the United States. The images put human faces on an immigration crisis that had festered beneath mainstream media's radar for decades, and grown particularly troublesome in recent years as more immigrants were detained and deported than ever before.

But the images also offered a rare, firsthand look into the lives of America's detained migrants. They were grief-stricken, weary mothers clad in beige prison garb. They were seemingly ordinary residents with homes and businesses. They were rebellious teenagers whose run-in with the cops had left them permanently severed from the places they called home. They were women who, in the words of an Iowa-based artist named Fidencio Martinez who'd also spent time in detention, were "still fighting for the safety and well-being of their children."

Martinez is one of 15 artists who've embarked on a new project to help illustrate letters written by immigrant detainees held at the Kernes Detention Center in Texas. The project, called Visions From the Inside, is led by CultureStrike, an online magazine led by artists and activists, in conjunction with advocacy groups Mariposas Sin Fronteras and End Family Detention.

Yahaira Carrillo, CultureStrike's managing director, who had immigrated from Mexico to Kansas as a child, told Mic that migrants were part of the creative process throughout this project, including "how they were looped in, their letters that were used, how we connected writers with artists [and] establish[ed] a relationship that impacted the art that came out."

Still, the process of getting the letters was complicated. "One of the things we were dealing with was a block on communication from the prison, [which] monitors all communications from inside out," Iris Rodriguez, of End Family Detention, told Mic. The letters were smuggled out to organizers and activists, who had them digitized, translated and then made public on End Family Detention. "This project was a slap in the face to that [control]," Rodriguez said.

One letter by a 19-year-old woman identified as Lilian Olivia describes the agony of family detention. Lilian was detained along with her small child and was found bleeding one day from a suicide attempt. "I come here so this country can help me," she wrote, "but here you've been killing me little by little with punishment and lies in prison when I haven't committed any crime."

For artists, the decision to participate in the project was easy. "I've been wanting to figure out a way to contribute artistically to understand what's happening with Latinos in immigration and make it visible to a lot more people," illustrator Robert Trujillo told Mic.

Here are some of the illustrations inspired by detainees at Kernes Detention Center in "Visions From the Inside":

"We need the help of all of you because we feel depressed and forgotten in this place." — Melissa, detainee

"They go through our drawers just like a prisoner. Sometimes they treat us with kindness, but other times they don't treat us well due to the fact that some are good and others are angry." — Miguel, detainee.

"I do not think it is fair to see my son incarcerated here when he could be free." —Anonymous mother and son detainees.

"When I got here, they initially told me that I didn't have a right to anything because of my deportations," — Anonymous mother detainee.

"I hope that you get out of there soon. Don't worry and don't lose faith that God will make it up to you. Always pray to Him that He give you strength to continue moving forward." — Anonymous teenage girl.

"There are some workers at this detentions center who think poorly of immigrants. We are also human beings, just as they are, and we have feelings." — Angie, teenage detainee.

The project started July 27. A new image will be uploaded to the Visions From the Inside Tumblr each day until Aug. 14.