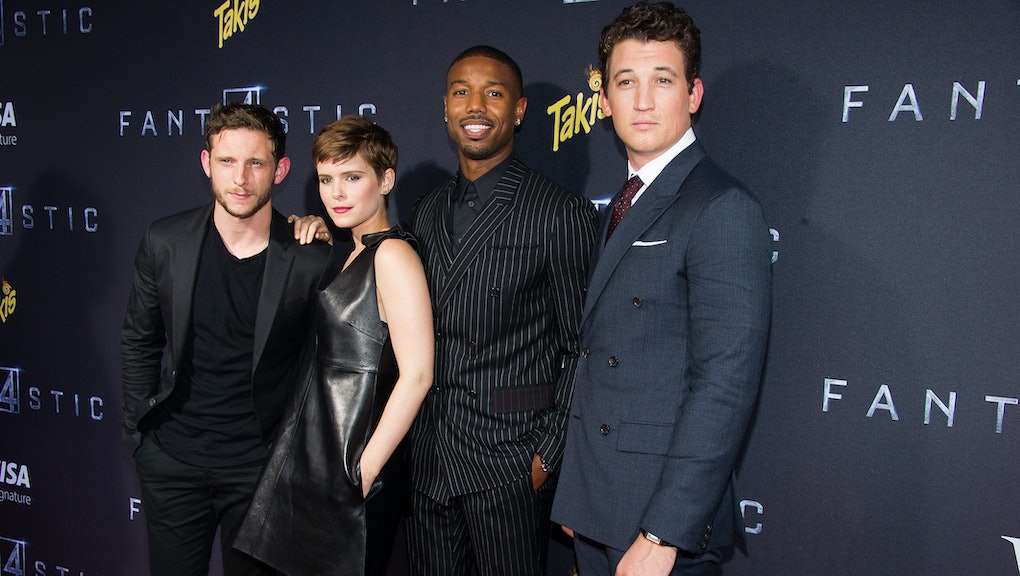 While a handful of film industry insiders have long made it a personal mission to infuse their works with calls to action against racial inequality, they may run the risk of being typecast as only caring about these things. Director Spike Lee, for instance, is largely regarded as a director who only makes so-called "black" films.

So it's rare for black actors, who are very likely to be typecast, to speak out against race and racism while also breaking into mainstream films, and even summer blockbusters. Yet that's exactly where we find Michael B. Jordan, the star of the Fantastic Four reboot.

What makes Jordan's ascension unique is that he hasn't compromised his personal politics for fame. In fact, he's doubled down on them. Fans saw that play out earlier this week, when he and co-star Kate Mara expertly pushed back at an interviewer's disbelief that he and Mara, who is white, could be siblings in the new Fantastic Four. ("We're still people," they said). But in an interview this spring with Entertainment Weekly, Jordan spoke about how unapologetic he's been about his politics, and how that's actually helped him in his career:

"Sometimes you have to be the person who stands up and says, 'I'll be the one to shoulder all this hate. I'll take the brunt for the next couple of generations.' I put that responsibility on myself."

Jordan has honored his own identity both on and off-screen. He first grabbed attention in the early 2000s, when he played Wallace on HBO's hit series The Wire, about corruption at the core of the war on drugs in Baltimore. In 2013, he starred as Oscar Grant in Ryan Coogler's breakout film Fruitvale Station, based on the real-life shooting of Grant on New Year's Day in 2009 by then-BART police officer Johannes Mehserle. "I felt like Oscar Grant could've easily been me," Jordan told Blacktree on TV in 2013, "being from Newark, New Jersey, constantly catching the trains back and forth from Newark to Manhattan, seeing that dynamic between me and my friend and transit officers."

Being cast as a black superhero is no easy task in an industry that resists change. Jordan had his share of critics after he was cast in the beloved Marvel role. "You're not supposed to go on the Internet when you're cast as a superhero," he wrote in an essay for Entertainment Weekly. "But after taking on Johnny Storm in Fantastic Four — a character originally written with blond hair and blue eyes — I wanted to check the pulse out there. I didn't want to be ignorant about what people were saying. Turns out this is what they were saying: 'A black guy? I don't like it. They must be doing it because Obama's president' and 'It's not true to the comic.' Or even, 'They've destroyed it!'"

Since then, Jordan has been actively involved in Blackout for Human Rights, a collective of black activists, artists and organizers who are using their work to bring attention to the challenges facing black communities in America.

Fantastic Four is not shaping up to be a critical darling, but will still likely have a sizable box office draw. Meanwhile, Jordan's been unwilling to silence himself on race throughout his career, and it's clear that so far, it's paying dividends.