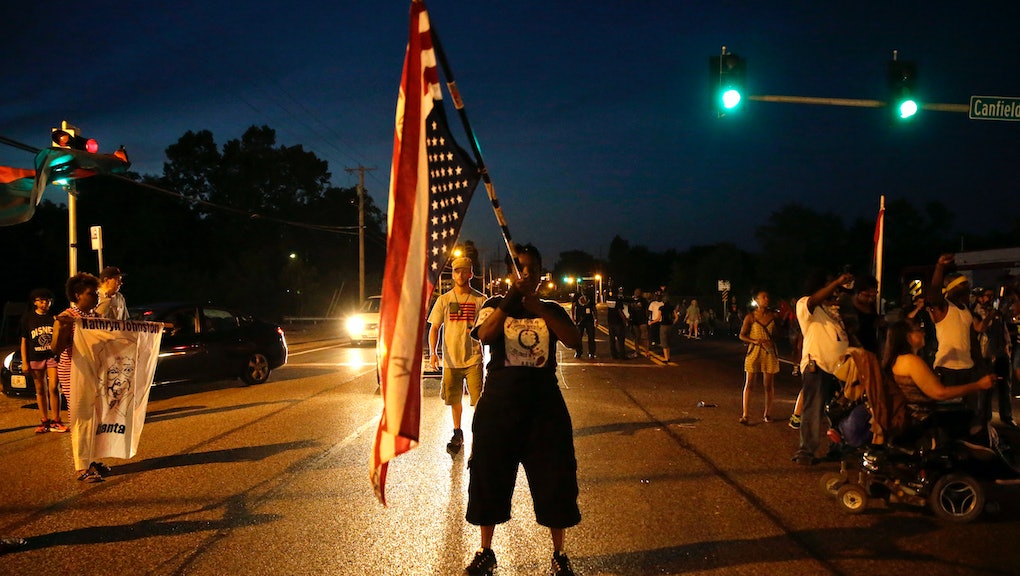 Ferguson, 1 Year Later: Why Protesters Were Right to Fight for Mike Brown Jr.

A year ago today, Mike Brown Jr. was killed by former police officer Darren Wilson in Ferguson, Missouri. Brown, an 18-year-old black male, had been shot at least six times, twice in the head, by a white police officer. His dead body was then left uncovered on Canfield Drive — in public view of family and neighbors.

The scene was nightmarish. This critical moment in contemporary United States history was not a beautiful beginning.

The Department of Justice found that Brown physically attacked Wilson and attempted to grab his gun. Wilson then allegedly shot Brown in self-defense. This information countered the testimony of Dorian Johnson, Brown's friend and witness to the shooting, who said Brown's hands were raised when he was shot, something Johnson still maintains as truth. "Hands up, don't shoot" would eventually become a protest cry.

But prior to Brown's killing, any unarmed black person's engagement with white police officers could be imagined as ending in death. Amadou Diallo, Oscar Grant, Shantel Davis, Eric Garner and Rekia Boyd are just a handful of unarmed black people across the country killed by police before Brown. Specifically in Ferguson, Brown's death was another symbol of years of racial bias by the town's police against black residents, as reported by the Department of Justice months after Brown was killed.

The report gave reason for some to question the basis of more than 100 days of protests in Ferguson. The Washington Post's Jonathan Capehart, for example, wrote in response, "...we must never allow ourselves to march under the banner of a false narrative on behalf of someone who would otherwise offend our sense of right and wrong."

Yet, Capehart, like others who argue Brown should not be the cause célèbre for a local-turned-international movement against blue-on-black violence, missed a significant point central to Ferguson protests: No matter how Wilson and Brown confronted each other, Brown was shot several times, including in the head. He was not wrestled to the ground or Tasered. In a matter of seconds, Brown was viewed expendable enough to shoot and kill.

In a country where Dylann Roof, who heartlessly killed nine black church members in the name of white supremacy, can be driven to a Burger King upon arrest by police because he was hungry, one must question the rubric law enforcement uses to determine who is and who is not worthy of life. Black people continue to lose lives and faith in the policing system.

Whether our hands are up or our fists clinched, when in the presence of police, officers are still likely to respond to black people differently than white people, too often with deadly force. And black people from Ferguson to Texas' Waller County are aware of this anomalous treatment.

Younger and older black people, with street and book smarts, donning sagging pants and pant suits, singing movement songs and rapping fiery political lyrics, marched on the streets of Ferguson last summer — literally "shut[ting] shit down" as echoed in their chants — because they had reached a collective breaking point. It didn't matter whether Brown had been guilty of theft or assault. Ferguson protesters knew Brown should not have been killed.

Indeed, the Ferguson uprising was a significant departure from the sit-ins, marches and direct actions typically associated with the black liberation movement. Protesters did not need a perfect symbol, an innocent victim or an ostensibly respectable face upon which to base their calls for justice — that is where Capehart and other critics got it wrong. They only needed a spark of injustice.

Protesters did not need a perfect symbol, an innocent victim, or ostensibly respectable face upon which to base it's calls for justice — that is where Capehart and other critics got it wrong. It only needed a spark of injustice.

The DOJ's investigation revealed the Ferguson Police Department's sustained history of racial discrimination and bias treatment of black residents. In the past year, significant personnel changes have been made in Ferguson's municipal leadership, President Barack Obama convened with Ferguson protesters at the White House to discuss policing, a movement for black lives has continued and Ferguson activists are among the leading voices in an ongoing public dialogue on policing, anti-black racism and state violence across the country. None of the above would have happened had the tenacious Ferguson protesters remained quiet or unconvinced of their unrest on Brown's behalf.

Moving forward, the American public need not base its assessments of justice and injustice on claims of police shooting victims' seeming possession of virtue or malevolence. The fact remains that Wilson is an unindicted former member of a police department that had been committing atrocious acts of institutionalized racism against black people for years.

The protesters in Ferguson saw themselves in Brown: potential victims or shooting targets of officers like Wilson, who served in a police department where anti-black animus was the standard.

So while the Ferguson story begins with the heartbeat of one of Ferguson's own tragically stopping, it continues because another was ignited. For that, the public owes gratitude to Ferguson and Mike Brown.