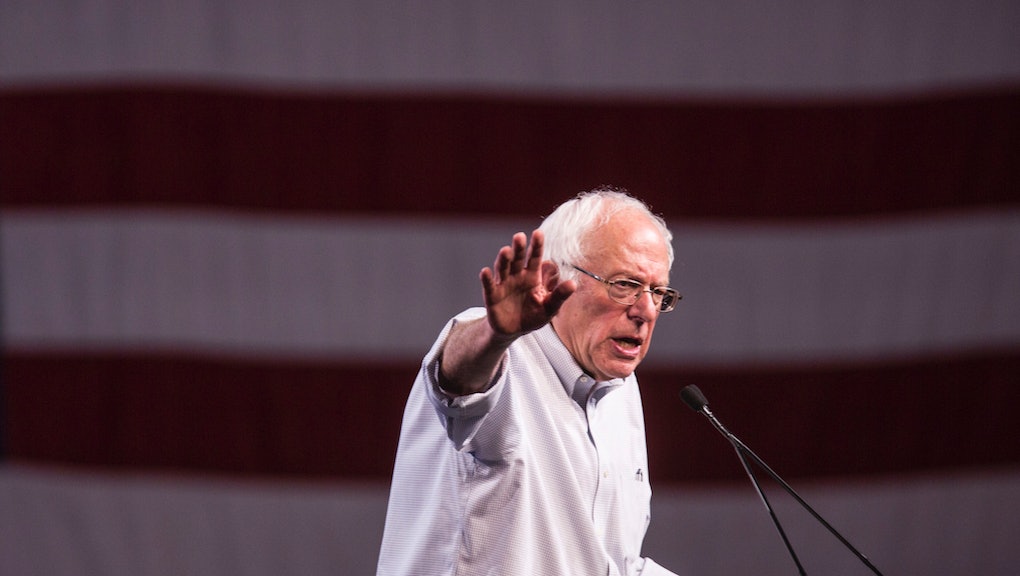 Dear Bernie Sanders: This Is What You Need to Know About Black Lives Matter

I know you were an organizer for the Student Nonviolent Coordinating Committee during your time as a student at the University of Chicago. I know you participated in the historic March on Washington in 1963, at age 21.

I know this because your avid supporters often refer to your past racial justice work as a way to remind black activists they should not critique you, a presidential contender who has done so much for them. Gawker, for example, wrote in response to some black activists' recent criticisms, "Don't Piss on Your Best Friend."

Let this be an acknowledgement that I see you and the work you've done. Yet you should consider why the expectation that I, or any black person, should applaud your past as a way of deflecting criticism — in the midst of continued, heart-numbing violence against unarmed black civilians — is insulting. This is not the '60s, and despite the continued iteration of your record of allyship with black people, the fact remains that five decades later, black people are still mobilizing against virulent anti-black racism.

There is too much work to be done to live in the past. Indeed, such deflection on the part of your supporters distracts from the question at the heart of the critiques aimed at you by black folk when they ask what policies, practices and institutional changes you are willing to advance to better the reality of black life in this country.

Perhaps your supporters believe such questioning to be unfair, because you are one candidate among many, and, besides, what president can do it all? Then again, you are presumed to be the candidate who will benefit the black populace the most, as well as the candidate who has been fighting for black people the longest.

If you really want to demonstrate that you care for black lives, and are willing to engage in the work of an ally, you actually have to listen to black people — black people like the two activists associated with the Black Lives Matter chapter in Seattle, who disrupted your speech during a rally on Aug. 8 by walking onstage and grabbing the microphone.

Were their tactics wrong? It depends. From the vantage point of your supporters, their actions were inexcusable. During the disruption, some in the mostly-white crowd attempted to drown out the voices of the activists, booing them loudly as they spoke, rejecting their points and presence. To others, their action was a necessary acknowledgement of the rage and frustration that stems from a long history of racial antagonism on the part of the state.

If you really want to demonstrate that you care for black lives, and are willing to engage in the work of an ally, you actually have to listen to black people.

One would think that your supporters — people who tout your progressive record and accomplishments as a civil rights movement organizer — would be less quick to write off these activists as mere distractions. As one of the activists, Marissa Johnson, told MSNBC after the event, "If Bernie Sanders is really grassroots and he's really there for the people, then he would make room for grassroots movements and not say to the grassroots movements, 'You need to settle with what I give you.'"

If the dismissive response to the two activists by some of your supporters is any indication of the white left's commitment to social and economic justice, what does that say about your campaign, which has been largely focused on income equality and workers? What does that say about rhetoric focused on class inequity but lacking urgent acknowledgement of the ways class, too, is racialized?

Perhaps the crowd's reaction, and much of media's response, to the activists' actions betrays a liberal base that views itself as white and, therefore, only concerned with issues impacting white people.

This brings me to your focus on workers. Focusing on laborers in an era of free-market capitalism is, indeed, a progressive turn. But "worker" is not a monolith, nor a synonym for "white laborer." Socioeconomic well-being is inevitably shaped by racial identification, gender and ability/disability, among other factors, and the resultant structural inequities. For example, while we know women across all races, on average, make less than white men, women of color make the least. According to the American Association of University Women, black women earned 64% of a white man's earnings in 2013; Hispanic women earned a mere 54%.

This is only a piece of the complicated matrix of class, gender and racial inequity. Thus the decision to include a racial justice component to your campaign is useful only if you also take into account the intersection of racial inequity, economic disenfranchisement, workplace discrimination and much more. After all, black people can't fight for a livable wage if they continue to be overly criminalized and disproportionately killed by law enforcement.

Many supporters are placing their bets on you as the most progressive candidate. If they aren't careful, they will turn you into a savior figure. It's important to remember that the present actions of many black activists are, in fact, bigger than a presidential run.

Such actions, like the disruption of the political rally in Seattle, are not about you, nor the presidency, as much as they are about urging people to contend more openly with our racial reality. These actions, hopefully, will also encourage the public to imagine a new, better reality that is radically different from our present.

This point is critical, because it means the American public must reimagine black politics as abolitionist and not reformist — or, at the least, as a mix of both. It means we must remember that on the day you marched in 1963, Martin Luther King Jr. spoke about a dream of a radically different world than the one in which he was killed. Should we keep advancing as a nation, all of us, progressive presidential contender or not, must be ready to be called out by black activists who refuse to rest amid democratic mediocrity. Activists from Ferguson, Missouri, to Baltimore will continue to "shut shit down." And we should want them to.