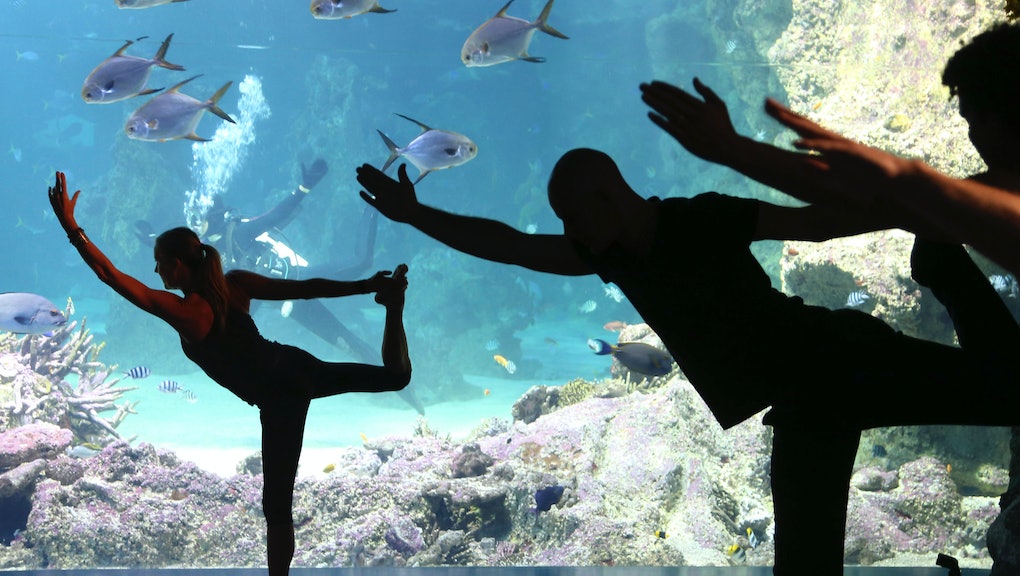 When you think about people who practice yoga, what image do you see in your head? Usually, you're less likely to conjure images of the Indian people who created yoga thousands of years ago, and more likely to think of rows of perfectly toned, Lulumelon-clad white women. This isn't necessarily a bad thing, but it does discredit the many different people with their many different body types who practice yoga for their own spiritual and physical health.

"People see yoga as the thin, blonde, white girl," Valerie S., who's Filipino and Mexican, told Colorlines' Miriam Zoila Perez. "I'm happy to be someone who is not of the main kind of people and show that people like me can do yoga as well."

Initially, Valerie said, she found that yoga classes weren't necessarily fit for larger people, but she eventually found the right teacher. "I've never really been that discouraged because my first teacher was pretty positive about it — you didn't have to get the pose right, you just had to know how to move your body around," she said. "I've learned that I can do [any] pose, I just have to modify it in a certain way."

Valerie, with 48,000 fans on Instagram, isn't the only woman of color, or larger person, to rock the yoga mat. Here's a more inclusive spectrum of the wide variety of people who practice yoga.

The point: Twenty-one million people practice yoga in the United States., according to the National Center for Complementary and Integrative Health, but it's long been troubled by what Forbes dubbed yoga's "race problem." Most mainstream yoga classes remain overwhelmingly white despite some individual efforts to diversify the practice, like the blog Black Yogis, which is run by Robin Rollan, who practices in New York City and Washington, D.C.

Today, yoga is a $27 billion industry and its ubiquity has led to more serious discussions of race. For instance, South Asian American Perspectives on Yoga in America was founded by Roopa Singh, after Singh felt alienated in what she called "a largely segregated yoga industry." In founding SAAPYA, Singh writes, "Yoga became and remains my primary way to be in my body, to integrate, to heal. The yoga studio site, the yoga class site, the yoga teacher training site, the yoga conference site thus all become charged with the potential for so much good, and such real harm."