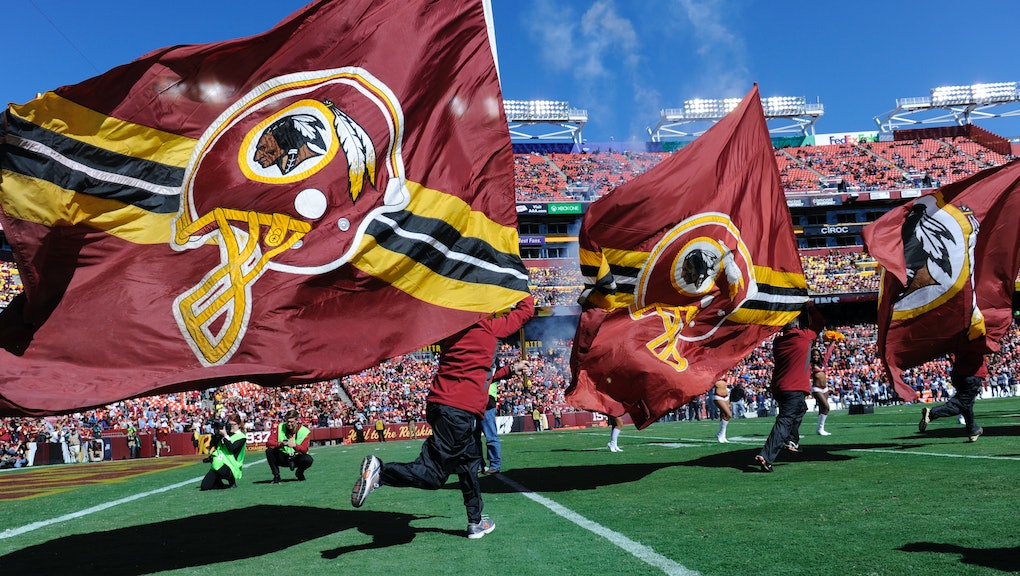 It's not hard to find racism in American sports. Just took at team names: football's Washington Redskins and Kansas City Chiefs, baseball's Cleveland Indians and at the college level, the Florida State Seminoles, complete with an on-field "tomahawk chop" to get fans riled up.

Redskins owner Daniel Snyder has become public enemy No. 1 in Native American activists' fight against racist team names. Some of that has to do with the fact that the Redskins are among the most profitable and well-known of all NFL organizations, but more of it has to do with Snyder himself, who has refused to even consider a name change.

That doesn't mean that Native American activists have just stood idly by. Matthew Bearden, for instance, is an Oklahoma-based artist whose latest project, "Sacred Mascots," turns white Americans' long fetishization of Native culture on its head by instead making them the subject of sports fans' gaze: Bearden, a member of the Citizen Potawatomi Nation tribe, is painting white people on football helmets as mascots.

He explained that his whole project started after trying to explain to his wife why mascots modeled after Native Americans are offensive, and decided to put the pope on one of his helmets.

"My example was the Notre Dame [Fighting Irish]," he told Mic. "If they put the pope on their helmet — he's kind of a chief and wears a holy relic on his head like a head dress — it would offend  a lot of people. Notre Dame would never do that."

"All I wanted to do was to get people to talk about it an see it for another angle," Bearden told Mic. He grew up in the tiny town of Hominy, Oklahoma, with a population of 3,565 and a high school whose mascot, the Bucks, is an Osage Nation warrior. But he didn't find it offensive, he said, because it "is more tied into the community, so people are more connected to it and have a bigger sense of pride than a bigger school or pro sports team."

Hominy has historically had a sizable Native American population, Bearden said, and in the 1920s it was home to a professional football team made up entirely of Native players. It's a far cry, he said, from the Redskins, which he considers totally disconnected from Native communities.

Bearden began painting helmets with images of white icons nearly a year ago. One includes an image of Patrick Swayze's 1983 film The Outsiders, a drama about a white teen gang in the '60s, which was filmed in Tulsa, about 45 minutes from where Bearden grew up.

Bearden isn't the first artist to turn the tables on race in this way. Last year, when Ian "Deejay NDN" Campeau, a member of the Native American electronic music trio A Tribe Called Red, wore artist Bryan Kirby's "Caucasians" T-shirt, modeled after the Cleveland Indians' logo, sales of the shirt rose dramatically — as did controversy.

"[Campeau is] fulfilling the intent of the shirt, which is an indigenous person flipping the role instead of having a grinning Indian on a white guy's shirt," Kirby told Huffington Post Canada.

Campeau posted a mock apology on Twitter, which used the same "I was just trying to honor these folks!" language that got the Redskins' Snyder into trouble.

As Bearden explains it, his message is a simple one about respect — and the glaring lack of it for Native American communities in the United States.