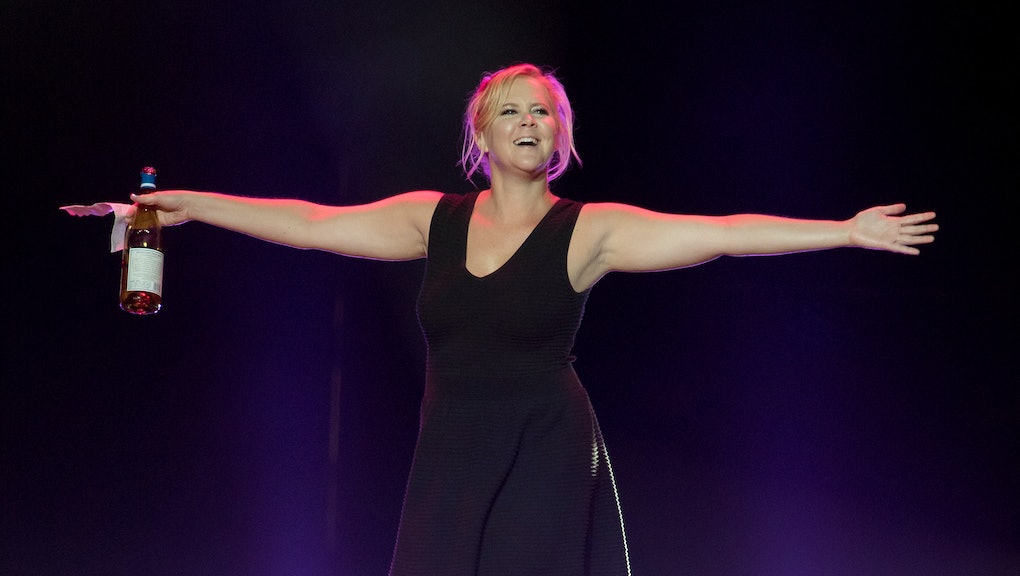 Amy Schumer is having quite a year. She wrote and starred in Trainwreck alongside Bill Hader and Tilda Swinton, she won a Peabody Award for her sketch show Inside Amy Schumer and she'll be releasing a Chris Rock-directed HBO special in October. Now, her series is nominated for six Emmy Awards — including one for the newly revamped variety sketch series category.

If Schumer's show wins that category, she'll join an elite group of female performers who have headlined variety shows to Emmy glory. That the following list is so short is an egregious statistic surely factored in when the Television Academy decided to split the variety category into two this year, thus avoiding the 15-year stronghold that (male-hosted) late night talk shows have had on the variety series category.

Nevertheless, the following six women offer a representative, if brief, history of influential variety sketch performers. They take us all the way from the physical humor of vaudeville through to the musical variety shows of the '60s; from the socially conscious skits of the late 20th century to the biting satire that has made Schumer a household name.

Your Show of Shows, a variety sketch show that's credited with pushing past vaudeville and introducing narrative "sitcom" sketches into its mix, was headlined by both Coca and Sid Caesar. Just like Schumer this year, Coca was singled out for a Peabody Award in 1953. Having started as a dancer and a musician, Coca's earliest success came from combining dancing with comedy. Her 1937 short film Bashful Ballerina had her perform a comic striptease during which she made seductive faces while only eventually removing one glove.

She brought that same sensibility to Your Show of Shows, as you can see in sketches like "Classical Musicians." Through pure pantomime (and accompanied by a live orchestra), Caesar and Coca play percussion musicians performing Tchaikovsky's "1812 Overture." She later went on to star in her own show, The Imogene Coca Show. She worked tirelessly into her late 80s, even appearing in a music video in 1984 as her famous character "the bag lady" for the hit Ebn-Ozn song "Bag Lady (I Wonder)."

While Coca's show consisted of 90-minute weekly episodes, Shore's show began as 15-minute biweekly episodes called The Dinah Shore Show. A well-known recording artist in the '40s — she even made a hit of the Chevy-sponsored title song "See the USA in Your Chevrolet" — Shore eventually nabbed a monthly hourlong color variety show.

That program, The Chevy Show Series, was later renamed after her. Having learned comedic timing from her mentor, Eddie Cantor, and being an all-around musical performer, Shore was able to feature both comedic bits and songs by herself and various guests, including Jimmy Durante, Julie Andrews and Barbra Streisand.

The sketch comedienne par excellence, Burnett began her career performing in New York City nightclubs before breaking out with her role in the Broadway musical Once Upon a Mattress. This led to guesting on The Garry Moore Show (for which she won her first Emmy in 1962) and landing her own show, The Carol Burnett Show, in 1967. A veritable variety hour, the show featured musical performances, comedic sketches and Burnett's trademark question-and-answer intro. During that regular segment, she showcased her ease as an ad-lib performer.

Most famously, the show featured Burnett's well-known character, Eunice, from "The Family" sketch. A brash, irascible woman who quarrels constantly with her Mama, Eunice was a keen-eyed satire of family sitcoms and proved that Burnett's comedy needn't depend on "likable" characters.

Best known for her work in Mary Poppins and The Sound of Music, Andrews also made a name for herself in the late '60s and '70s as a variety performer on shows like The Andy Williams Show, The Ed Sullivan Show and, of course, on the various specials she taped over the years with Burnett.

Andrews' ABC show lasted only one season, but it played to her strengths as a musical comedy performer. She pushed her posh persona to embrace the utterly ridiculous. Her strongest sketches always involved a spoof of a beloved property that was funny because of its sincerity, as is the case in a skit that has Andrews and Ken Berry doing a medley of the Fred Astaire and Ginger Rogers pictures ("they were all alike!").

Nominated this year for her work on Netflix's Grace and Frankie, Tomlin began her storied career in Hollywood as a variety performer. She broke records and set milestones for female comics from her beginnings on Laugh-In in 1969. There, she created signature characters like Ernestine and Edith Ann who she'd reprise again and again over the years.

Ernestine, a testy phone operator, was at the center of Tomlin's first comedy album, This Is a Recording (1972), which remains the highest-charting comedy album by a female solo comedian. It also won Tomlin a Grammy Award that year, making her the first woman to win best comedy recording by herself (though Elaine May had won the award alongside Mike Nichols the decade before).

Tomlin won an Emmy in 1981 for her work on Lily: Sold Out, a TV special based on her successful Broadway show, which she transferred to Las Vegas. It featured staples of Tomlin's stand-up comedy, including a song and dance number that finished with Tomlin doing a backflip onto a water tank and a Nine to Five reunion in a skit featuring Tomlin's homeless woman character, Tess.

The only female performer here to win the category for different shows, Ullman is arguably one of the most successful British comedians of her generation. She got her start in sketch comedy even as she bemoaned the female stereotypes she was often asked to play. It's no surprise she relished the opportunity afforded her by James L. Brooks to inhabit a variety of different characters in her Fox show The Tracey Ullman Show, a series perhaps best remembered now for having been where The Simpsons premiered.

Ullman's comedy has always sought to question issues of cultural clashes, portraying and representing characters of different ethnicities, genders and sexualities. Among her various recurring characters, Ullman famously played Francesca McDowell, a New York City teenage girl being raised by her father (played by Dan Castellaneta) and his partner (Sam McMurray). Ullman's commitment to sexual diversity was furthered by the premiere episode of her HBO show Tracey Takes On... in 1996, which opened with a sketch where she kissed cast member Julie Kavner (the voice of Marge Simpson).

Inside Amy Schumer is nominated for six Emmy awards, including outstanding variety sketch series. It is available for streaming on Hulu.