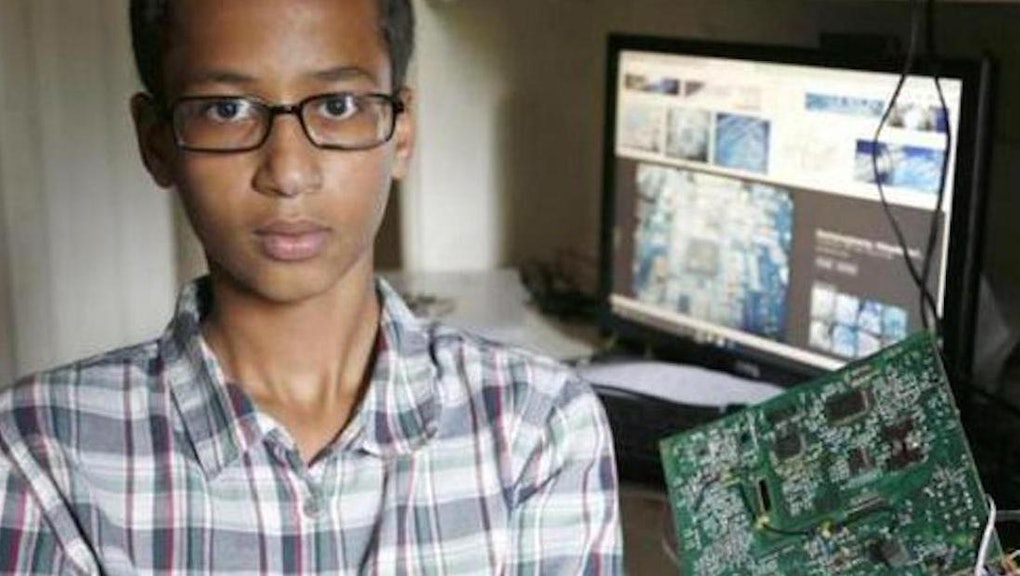 Ahmed Mohamed is a smart kid. At 14, he's already making his own radios and repairing go-karts. Normally, that type of do-it-yourself know-how earns praise from teachers and even classmates. But because Mohamed is a Muslim American student living in an area with a history of Islamophobia, it made him a prime suspect for terrorism.

Mohamed brought a homemade clock to school Monday to impress his new high school teachers, the Dallas Morning News reported Wednesday. He'd enjoyed his robotics club in middle school and thought his tech knowledge could help him find his niche in high school. But school officials reportedly thought Mohamed's project was a bomb; soon, four police officers were at the school to take him into custody.

Standing with a student: The story has sparked widespread outrage, as #IStandWithAhmed has become a trending hashtag on Twitter.

This is no anomaly: Students of color have gone from science labs to handcuffs before. In 2013, Kiera Wilmot, then a 16-year-old at Florida's Bartow High School, who was arrested and recommended for expulsion after a science experiment she did with aluminum foil and toilet bowl cleaner exploded in her biology class. Though she did graduate with her class in 2014, she's still dismayed at how her school and local authorities handled her case.

"After the investigation, they should've just left it at a 10-day suspension," Wilmot, who's now a 19-year-old mechanical engineering student at Florida Polytechnic University, said Wednesday to Mic. "It was a very stressful time. People still bring it up." She said that while applying to Florida Polytechnic, she had to explain the ordeal to admissions even though she wasn't convicted of any wrongdoing. "At the time I felt like my future was ruined," she said.

Greg Schiller, a science teacher at majority-Latino Ramon C. Cortines High School in Los Angeles, was suspended last year after another employee raised concerns about projects that two of his students submitted for a science fair. He was ultimately allowed back in the classroom and declined to speak specifically about his case to Mic because it is being appealed by his union. But he did broadly outline what he says is one of the biggest problems science teachers and students face in schools.

"Some people don't understand science and don't take the time to look at a project," Schiller told Mic on Wednesday. "There's a lack of understanding of science that's systemic problem within our society with our school system. The people running them are science deficient, they don't involve themselves in science fairs and projects."

But Mohamed's story has also shed light on Islamophobia in the United States, according to some advocates. "We believe this was a gross overreaction by school officials and by police and it wouldn't have ever occurred if his name wasn't Ahmed Mohamed," Ibrahim Hooper, spokesman for the Council on American-Islamic Relations, told Mic. "It's symptomatic of the tremendous growth in Islamophobia we've seen in American society, and it's one of those incidents that can push our nation's leaders to speak out."

That prejudice, compounded with lack of scientific understanding and a scarily efficient school-to-prison pipeline for students of color, is turning out to be a recipe for disaster.

The problem is much bigger than individual cases of administrative overreach. Science, technology, engineering and math fields have remained stubbornly white and male domains. In fact, even as the United States has become more obsessed with tech gadgets than ever before, the numbers of black people and women in the field have remained low and, in some instances, even declined.

In 2011, President Barack Obama said, "We don't have enough engineers," and then pushed lawmakers to develop plans to train 10,000 new ones. But American children generally lag behind their peers globally in math and science. To change this, researchers have shown successful results in what they're calling "project-based learning," or hands-on experiments that allow students to apply scientific concepts to real-world problems. The problem, though, is that this is the kind of exploration Mohamed and Wilmot demonstrated — and were punished for.

"The next-generation science standards are all about project-based learning," Schiller says. "And yet instead of saying, 'Wow, these kids are getting it,' the child has a very negative experience."

A message left with MacArthur High School's administration was not immediately returned.