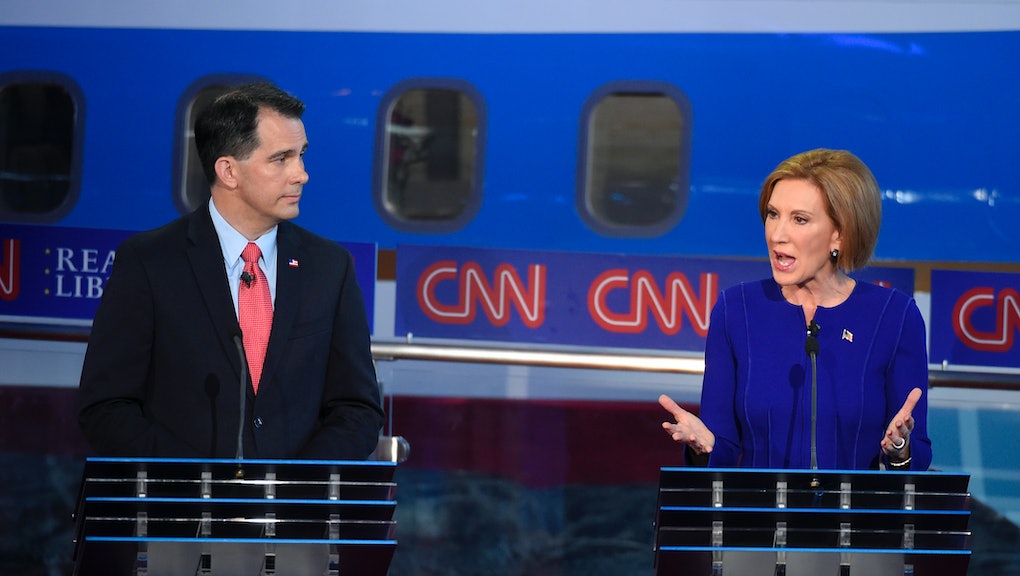 Former Hewlett-Packard CEO Carly Fiorina argued on Wednesday night that Republicans must defund Planned Parenthood — even if it means risking a government shutdown.

The only woman on the GOP presidential debate stage in Simi Valley, California, Fiorina said she considered abortion a threat on par with the Iranian government, then cited a series of secretly recorded and deceptively edited videos as evidence to back her cause.

"I dare Hillary Clinton and Barack Obama to watch these tapes," Fiorina said. "Watch a fully formed fetus on the table, its heart beating, its legs kicking, while someone says, 'We have to keep it alive to harvest its brain.' This is about the character of our nation, and if we will not stand up to force President Obama to veto this bill, shame on us."

It was not immediately clear which clip Fiorina sought to reference, though a medical technician discusses a similar, if considerably less graphic, scenario in a video published Aug. 19.

The squabble on Capitol Hill centers on the federal budget, which delivers hundreds of millions of dollars annually to Planned Parenthood. The law does not permit those funds to be used on abortion but opponents argue that any financial support for the group makes the government a party to the procedures. Conservative Republicans in the House and Senate are now agitating for a bill that would put a moratorium on government aid, despite assurances from President Obama that he would veto any such legislation.

If the Republican majority and Democrats, including Obama, cannot come to an agreement by Oct. 1,  the federal government faces its second shutdown in two years.