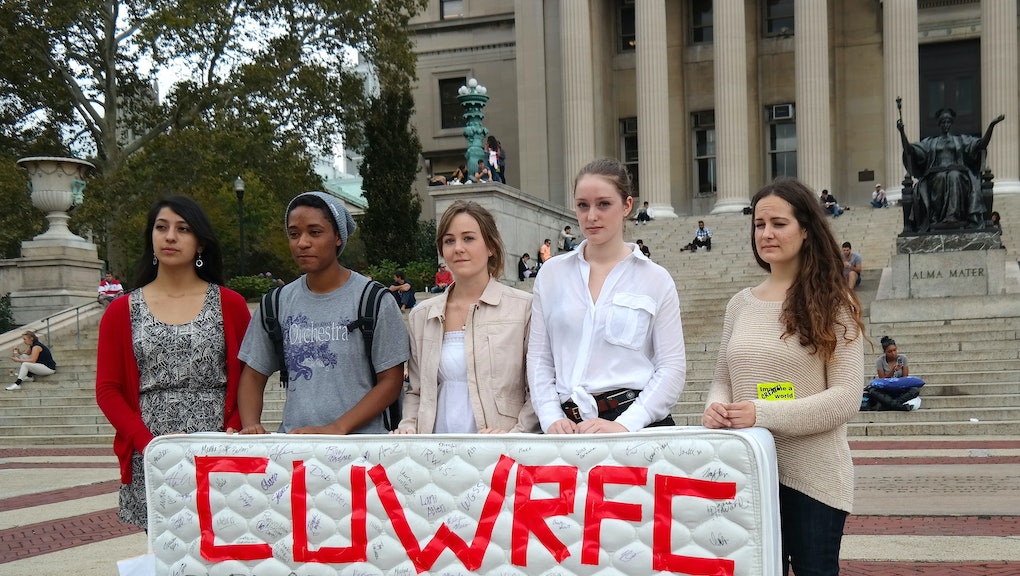 Susan Brownmller is an important American feminist. In 1975, she published an important book called Against Our Will: Men, Women and Rape. But Brownmiller, who's now in her 80s, isn't happy with what she sees in the current movement to end campus sexual assault. In a revealing interview with New York magazine's the Cut, she explains why.

In the interview, Brownmiller points out the messages she sees as antithetical to women's safety. "Culture may tell you, 'You can drink as much as men,' but you can't," she tells the Cut. "People think they can have it all ways."

Brownmiller said the idea of slut walks bothers her ("They said you can wear whatever you want. Well sure, but you look like a hooker.") and that college activists are focusing too much on themselves.

"Also, [college women] are not the chief targets of rapists," she said. "Young women and all women in housing projects and ghettos are still in far greater danger than college girls."

Many times throughout the interview, Brownmiller laments that young activists seem to be ignorant of the policies and cultural wins of the feminists who preceded them. But her overall point is clear, and troubling: It's largely up to women to stop their own assaults. "My feeling about young women trapped in sex situations that they don't want is: 'Didn't you see the warning signs? Who do you expect to do your fighting for you?'"

Brownmiller's personal responsibility ethos flies in the face of the current arguments about ending sexual assault. One of those is that rape is about power, and one of its most virulent forms is the aggressive masculinity that many men are taught from very young ages. Interestingly enough, Brownmiller herself brought that concept into mainstream thinking with her landmark book.

"Rape is an historical condition that underlies all aspects of male-female relationships," she wrote, according to a 1975 interview with People. "It is a crime not of lust but of violence and power. The threat, use and cultural acceptance of sexual force is a pervasive process of intimidation that affects all women."

Rape, she told People, is "a part of women's experience that hasn't been considered important enough for the history books. I also wanted to show that attitudes can be changed: For example, when Southern communities turned against their own lynchers, lynching became an indefensible crime. I want rape to become that kind of crime."

As Brownmiller pointed out 40 years ago, and the young campus activists of today want everyone to know, women should not have to learn how to avoid being raped. The message should be that people need to learn not to rape.