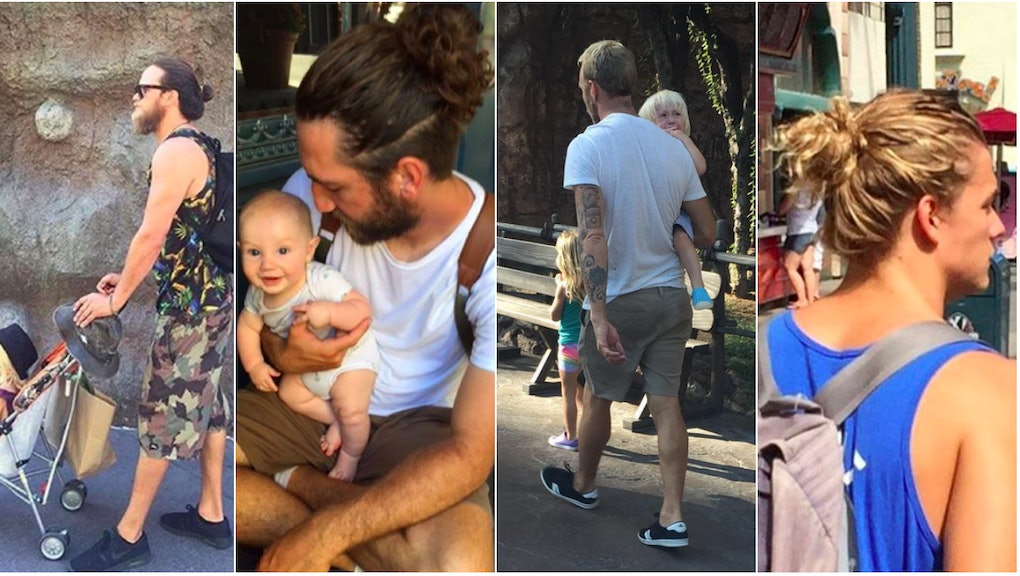 Will Young Dads and Their Man Buns Finally Bring an End to "Dad Style?"

A description of the fashions seen in the Fat Jew's debut Fashion Week show is like playing word association with the phrase "dad style." The social media celebrity – real name Josh Ostrovsky – used actual fathers, found on Craigslist, as models for his show, which highlighted a classic, beleaguered style trope: bad dad style.

"They all had that haggard, shuffling physicality that tells the world, 'I can't unsee where babies come from,'" wrote fellow dad Elie Mystal in a review of Ostrovsky's show for Fashionista. "In Ostrovsky's world, dads match their outfits to the activity in which they are engaged. Snow-Shoveling Dad wears snow pants and long grey sleeves while carrying his comically undersized shovel. Sunday Ticket Dad wears his team's jersey. Handy Daddy wears flannel and clips his tape measure to his waist."

The outfits were a comical exaggeration, a heightened version of a fashion reality we know to be true. Except, well, the bigger joke might be that "bad dad style" itself isn't quite true. In an era of dads with man buns, is dad style getting good?

A new era of Dad Style possibility: There's something to be said when the trendy man bun morphs from the epitome of hipster edginess to utterly mainstream to a legit dad trend. There was one accepting an Emmy on stage this week, for gosh sake.

Just take a look at Man Buns of Disneyland, the dreamy Instagram account chronicling the influx of trendy fathers to The Happiest Place on Earth. The Instagram, along with DILFs of Disneyland, are the best sign yet that today's dads are not, er, your mother's dads.

The rise of stylish dads may be a matter of demographics: Millennial men are becoming millennial fathers and they're bringing their fashion inclinations with them. Young men are actively interested in style, spending twice as much on clothes compared to men of previous generations.

Thanks in part to style-savvy young men, the menswear is expected to climb by 8.3% within the next two years, making it a $110.3 billion industry, reports research firm Euromonitor.

"The difference between the last generation of dads and this generation is the exposure to fashion in a way that maybe our fathers never experienced," said Noam, a 28-year-old who works at a New York law firm and is dad to a 1-year old girl. "Today, when us dads go to Disneyland or to soccer games, we do place more importance on looking sharp. Living in the city, I certainly haven't changed my desire to look good when I go out [since becoming a dad]."

"I do believe that young people are dressing up again and it is because they don't want to look like a slouch on their social media profiles," McGregor J. Madden, co-founder of custom suit company Proper Suit, told retail insights site Vision Monday.

That influences the quick spread of trends, as well as a general upping of everyone's game. Add to that the very public rise of celebrity dads, constantly presented as hands-on yet ridiculously stylish in magazines and on their own Instagrams. When fashion icons Justin Timberlake and Ryan Gosling are dads, "dad style" is bound to take on new meaning.

It doesn't hurt that recent style trends for men have included comfortable, functional items like sneakers and tailored sweatpants (say it with us: "athleisure"). Could fathers ask for better fashions these days?

Parenting, however, might make "dad style" inevitable: Being a trendy young dads, however, may not ensure a total overthrow of dad style. At the heart of it, being a parent doesn't always allow for dressing well, which might explain the long tradition of bad dad style. Just take father Doyin Richards, whose recent defense of cargo shorts rests on the practical demands of parenting:

"I need a place to keep all of the high-rotation items for my kids readily accessible without having to dig through a diaper bag. That's where the oh-so-glorious cargo pockets come into play. Need a water bottle at the playground? Boom. That's in the right leg pocket. Need to clean the fistful of mud (at least I hope it's mud) before handling your snack? I got it covered, kid. Hand sanitizer and wipes are in the left leg pocket."

Parenting happens in the dirty moments, not just the Disneyland visits, and function can overtake form out of necessity.

"Kids see their dads in pajamas on a Sunday morning, kids see their dads wearing a crappy t-shirt and weird shorts as he does chores around the house," said Jon, a 32-year-old father of a 2-and-a-half year old son and a daughter arriving in November.

"I think dads will always appear somewhat unfashionable in front of their kids because kids see us at times when we don't care to be fashionable," Jon added.

Indeed, by the time dads reach our parents' age, decades of practical parenting demands along with a distance from trends might inevitably result, in every generation, in "bad dad style," the kind depicted on the Instagram account Fashion Dads.

"We were talking about our own dads' ridiculous outfits and were like, 'We should create an Instagram account for this," 31-year-old Ashley Hesseltine, who co-created the account with Travis May, 30, told ABC News. "We started with pictures of our own dads then people started submitting them." Think Hawaiian shirts, socks and sandals or dad jeans with vintage New Balance sneakers.

Only time will tell if today's DILFs of Disneyland will eventually wake up one day and find themselves Fashion Dads. Even if we stick with what's trendy, it might be inevitable: In the eyes of young'uns, being a parent is always a relatively uncool status.

"Honestly, I don't think dads will ever be cool to their kids. I think that our legitimacy as a card-carrying cool member of society ends as soon as our kids eventually learn what it is to be 'cool,'" said Jon. "THEIR definition of cool," he stressed. "Not yours."

Today's man buns and v-necks just might be the Hawaiian shirts and cargo shorts of tomorrow.