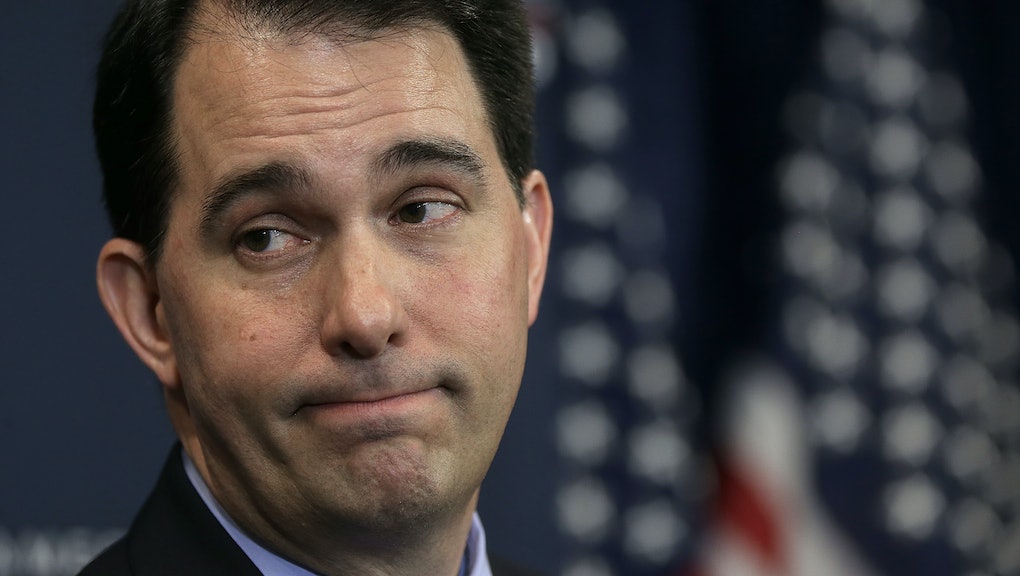 Scott Walker Drops Out, Becoming the Second Casualty of the GOP Primary

Anti-labor icon and one-time front-runner Gov. Scott Walker became the second Republican presidential candidate to officially suspend his campaign for the White House on Monday, a move he characterized as taking one for the team to prevent the potentially disastrous nomination of billionaire front-runner Donald Trump.

"Today, I feel I am being called to lead by helping to clear the field," Walker said at a hastily arranged press conference in Madison, Wisconsin. "With this in mind, I will suspend my campaign immediately. I encourage other Republican presidential candidates to do the same, so that the voters can focus on the few candidates who represent a positive, conservative alternative to the current front-runner."

The official announcement took place a mere 70 days after the Wisconsin governor entered the race with high expectations and front-runner status.

According to the New York Times, which first reported Walker's plans to drop out, the candidate concluded there was no longer a viable path to the Republican nomination after a series of missteps and lackluster debate performances left him with 0% of the Republican electorate's support. The polling collapse has led to an exodus of high-profile donors in recent weeks, leaving Walker with a skeletal ground team and little hope of mounting an effective campaign for the Iowa caucuses.

"The short answer is money," a Walker supporter told the New York Times. "He's made a decision not to limp into Iowa."

Why he never got off the ground: It's a humiliating finish for a candidate once seen as the guy to beat. A national conservative hero for his victorious battles against public-sector labor unions, Walker entered the year close to the top of national polls and successfully courted billionaire brothers Charles G. and David H. Koch, who in April predicted Walker's eventual nomination.

With the wind (and the Koch brothers) at his back, Walker was seen as a candidate who could bridge the divide between movement conservatives and the Republican Party's donor class. But once billionaire agitator Donald Trump threw his hat into the ring, the chasm between the GOP's base and its leadership grew too vast to straddle — and Walker fell into the abyss. Struggling to make himself heard in the crowded Republican presidential field, which swelled to 17 candidates at one point before another well-known Republican governor threw in the towel on Sept. 11, Walker took a series of extreme, often contradictory opinions on red-meat issues like immigration and the 14th Amendment.

Murmurs of the Walker campaign's collapse have increased in volume in recent weeks, reaching a crescendo after the governor's feeble performance in the second Republican primary debate on Sept. 16. The candidate only spoke for eight minutes of the three-hour debate, leaving a weak impression on voters and donors alike. According to a Politico survey of activists, operatives and strategists in the early-voting states of Iowa and New Hampshire, Walker was viewed as the major political loser of the summer.

"He can't seem to find his way on any given issue with a handheld GPS," one operative told Politico at the time. "He's been on all three sides of every two-sided issue. For the last two months hasn't made a single policy pronouncement that he or his staff hasn't had to clarify or clear up within two hours. When you're reduced to saying 'yeah' doesn't mean 'yes,' you're in trouble. 'Unintimidated' has given way to 'uninformed' and 'unprepared.'"