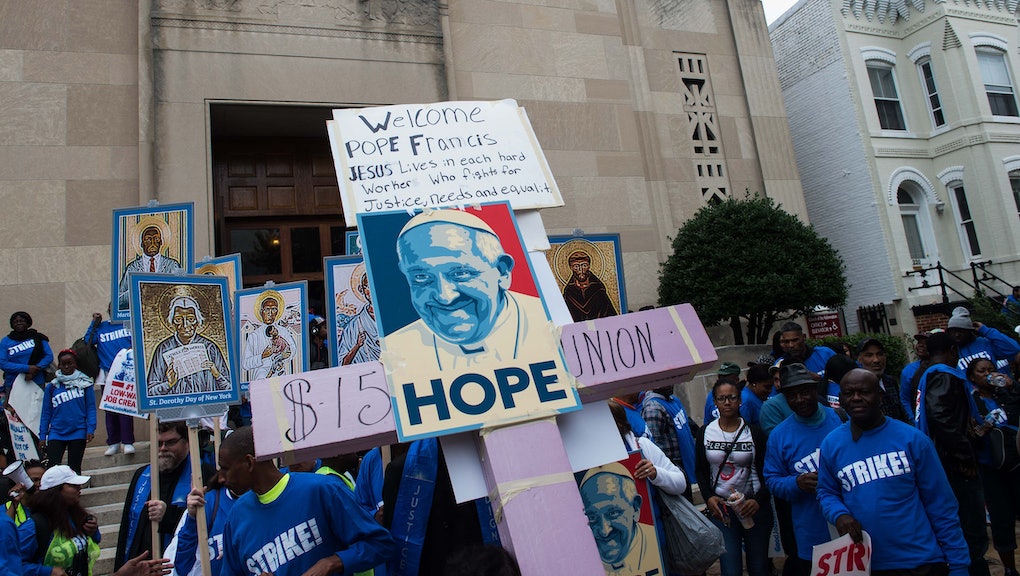 Pope Francis' six-day tour of the eastern United States could not have come at a more critical moment. He has met with President Barack Obama at the White House, addressed a joint session of Congress and will preside over massive audiences across three cities. Millions of Americans are watching the pope as he delivers a message of equality at a time of raised public concern over broad problems like homelessness, climate change, income inequality, tribal sovereignty and anti-black racism, all coming amid a presidential election cycle.

Some contenders in the current race to the White House are not sheepish regarding their religious affiliations. Republican candidates like Rick Santorum, Bobby Jindal and Dr. Ben Carson, among others, have spoken publicly about matters of faith. Former Arkansas Gov. Mike Huckabee, an ordained Baptist minister, for example, told the Huffington Post "God is much more real to me than the clouds." These candidates, as well as American voters, say their faith informs their stances on issues as far ranging as same-sex marriage to women's reproductive rights.

Faith can be dangerous when used to wrest freedom from the public, but as the pope — a contested symbol of moral and religious authority — illustrates, it can also produce visions of a more just society. So how can faith make an impact when it comes to transforming this country for the better?

Faith matters. The ways faith is wielded in the public sphere is equally important. Religious convictions can ultimately shape how the public votes in elections, the policies accepted or admonished within government, as well as the formation of social relationships in any given society. It is possible, however, to publicly profess religious belief without brandishing it as a weapon.

In an extensive 2004 interview by Cathleen Falsani, former Chicago Sun-Times religion reporter, republished by Sojourners in 2012, then-Illinois state Sen. Barack Obama said, "I think there is an enormous danger on the part of public figures to rationalize or justify their actions by claiming God's mandate. I think there is this tendency that I don't think is healthy for public figures to wear religion on their sleeve as a means to insulate themselves from criticism or dialogue with people who disagree with them."

But should public policy be determined by faith, or should it be guided by a principled commitment to equity and the public good? Faith can, in fact, inspire both politicians and the voting public to embrace justice and equity.

"As a religious leader, I know my tradition — reformed Christianity — offers an alternative vision of a good society," the Rev. Duane Bidwell — associate professor of practical theology, spiritual care and counseling at Claremont School of Theology in California — told Mic. "That vision serves as a critical utopia or measure for how we live our public life together in the United States. It's the bar we are trying to reach."

Yet, there are some who fail to make a distinction between the state and church. Recently, for example, Rowan County, Kentucky, clerk Kim Davis made national headlines after being held in contempt of court and jailed for refusing to issue same-sex marriage licenses because of her religious convictions. She was lambasted by progressive critics and heralded the Rosa Parks of this cause by some Republicans.

Beyond the obvious outrage stemming from the negative impact Davis' actions have had on LGBTQ constituents in her municipality, her faith-inspired act ultimately revealed Christianity is not a monolithic religion. Not all Christians believe that same-sex marriage is wrong. In fact, some Christians view Davis' actions as antithetical to Christian teachings.

"As a Palestinian-American Christian, who practices Quakerism, I refuse to allow the religious right in the U.S. to have a monopoly on Christianity," Sa'ed Atshan, visiting assistant professor of peace and conflict studies at Swarthmore College told Mic. "For instance, I see deep faith and ethics based on compassion, not in the homophobia of Davis, but in the countless Christian leaders across the country helping young LGBT people reconcile their faith and sexuality."

"Do no harm" is an ethic that should ultimately guide the ways faith is exerted in the public domain. Furthering inequality by failing to adhere to laws that protect vulnerable populations because of one's selective reading of religious texts, like Davis did, is the wrong way to use faith, especially among elected officials.

As the Rev. Valerie Bridgeman, associate professor of homiletics and Hebrew Bible at Methodist Theological School in Ohio, told Mic, "The Bible does not 'trump' the constitution in this democracy. The state is not the church."

Religious plurality is necessary and religious liberty is equally crucial. Protection from the power of religious influence on legislation advancing equality is vital too. Vulnerable members of the American public should not have to seek legal intervention because public servants caused harm based on claims of religious liberty and exemption. That is an example of faith gone wrong — a type of faith practice that the public should be wary about.

And yet, "nearly 3/4 of the public (72%) now thinks religion is losing influence in American life," the Pew Research Center reported based on results from a 2014 survey it conducted on religion and politics. The most shocking finding, however, was Pew's conclusion that "most people who say religion's influence is waning see this as a bad thing."

The sudden diminishing of religious influence in the U.S. may or may not be named a "bad thing" depending on those offering their assessments. The fundamentally religious, like presidential candidate Carson — who opposes same-sex marriage and has made has made Islamophobic statements — may identify the waning of religious influence as a troublesome trend. Groups for whom religious belief has been cited as a rationale for their inequitable treatment in the U.S. might view this trend positively, however.

Ravi Perry, associate professor of political science at Virginia Commonwealth University, said to Mic, "From Kim Davis' illegal insistence on a right to express her faith even when it conflicts with the law of the government for whom she works, to Dr. Ben Carson's belief that Muslims should not be president, to conservatives lamenting Pope Francis' historic visit to the United States, the trampling of actual religious liberty in favor of right-wing conservative Christianity is rampant right now." But there is more than one way to be Christian and express one's belief.

Faith and politics in the U.S. are deeply enmeshed and have always been. Because of the confluence of faith and politics throughout U.S. history, the line that separates the church and state is often blurred. Aspects of American life that might otherwise be considered matters of faith are often politicized as a result.

Even the Pope's visit has raised the ire of both the conservative right and liberal left. On one hand "Francis is [viewed] as a change agent who has deemphasized traditional concerns like contraception, abortion, gay marriage and stem-cell research" to the chagrin of conservatives, including the six Republican presidential candidates who are Catholic, according to the Washington Post.

The answer to the question of which side is right must begin with an assessment of whether or not one's faith is exercised with care or disregard for the public. The moral authority will always be on the side of those advancing the vision of a beloved community. As the Pope shared during his presentation to the U.S. Congress on Thursday, politics is "an expression of our compelling need to live as one, in order to build as one the greatest common good...."

His visit presents an opportunity to see where the U.S. and the Vatican fall along those lines.