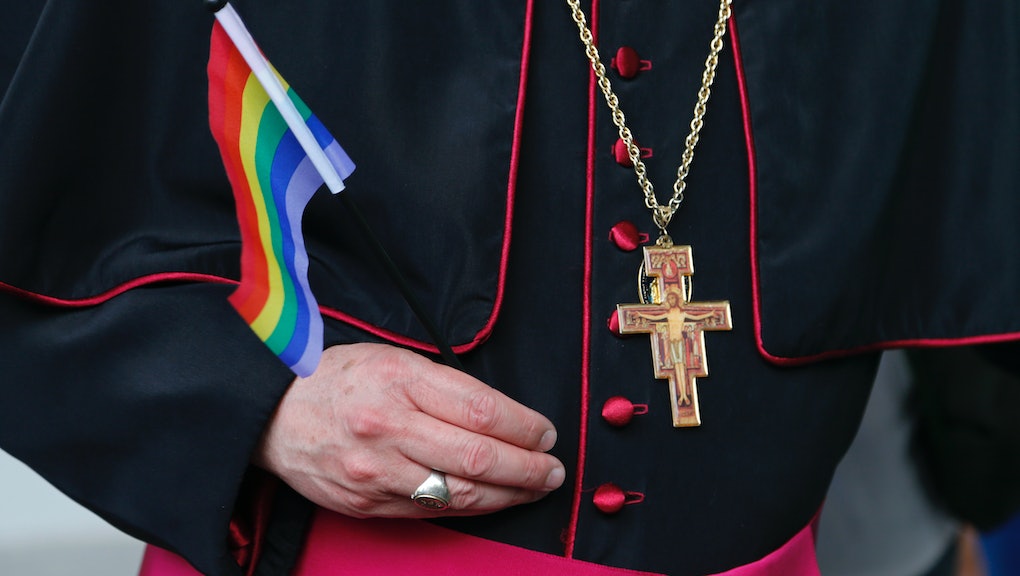 Like many kids, Lance Sanderson, 18, hasn't had it easy in high school. But his time at Christian Brothers High School in Memphis, Tennessee, has been especially tough for one overwhelming reason: He's openly gay.

Sanderson, a senior, told Mic that he's been out since his freshman year and has dealt with a steady stream of homophobia while attending CBHS, like the time his English classmate shouted the main character was a fag 17 times as they watched Dead Poets Society. In recent weeks, however, the actions of school administrators, not his classmates, have caused him the most trouble, because they've refused to let him bring a same-sex date to the school's upcoming homecoming dance.

"I didn't have a date to bring last year," Sanderson told Mic. "I was kinda thinking about transferring, because I was getting a lot of homophobic remarks."

Sanderson, who runs a business as the school's unofficial sports photographer, first talked about the possibility of bringing a same-sex date to the prom to a seemingly supportive school administrator last spring.

"He said the school doesn't discriminate, and I could bring whoever I want," Sanderson said. That administrator, however, left CBHS over the summer. When Sanderson raised the topic with another school official, he said the reply was very different. In an email obtained by Mic, the administrator wrote, "We do not allow boys from other schools to attend CBHS dances."

When referring to Pope Francis's more lenient attitude toward same-sex relationships, the administrator wrote, "He is not the authority to which CBHS is accountable," adding, "I really struggle with permitting you" to bring a date. Calls to the CBHS's administrators and the Memphis Catholic diocese were not returned.

Loud and clear: Sanderson said when he pushed the issue, school officials told him he could no longer photograph sporting events. The school "wanted me to tell people I had to take a break for a while for personal reasons," he told Mic. In the meantime, the school put together a committee to look into the matter and come up with something akin to an official policy that would resolve the issue. That new policy was released this week in a bulletin and specified girls from other schools could attend homecoming, but "boys from other schools may not attend."

The bulletin, Sanderson said, is read each morning on the school's public address system.

Catholic kids and same-sex dating: It's not the first time gay students have fought for the right to bring same-sex dates to Catholic school dances. In 2012, a lesbian couple in Kentucky was turned away from a Catholic school prom in Lexington in an incident in which administrators cited the Catholic Church's stance on same-sex relationships. The couple held their own prom, instead, in the school's parking lot. Others, like McQuaid Jesuit High School in Rochester, New York, have welcomed same-sex couples to attend their prom.

Catholic schools appear to be reckoning with the prospect of same-sex rights on a case-by-case basis. Margie Winters was fired from her teaching position a Catholic school in Philadelphia after parents complained about her being gay. Winters was recently invited to the White House and told the Associated Press that she hopes to meet the pope while he's in the United States this week to get him to "extend his message of inclusion to gay, lesbian, bisexual and transgender Catholics."

With homecoming approaching this weekend, Sanderson said his fight has been exhausting. "I stay really busy with work, three AP classes and I'm in the middle of college applications," he said. "It's been a stressful week."