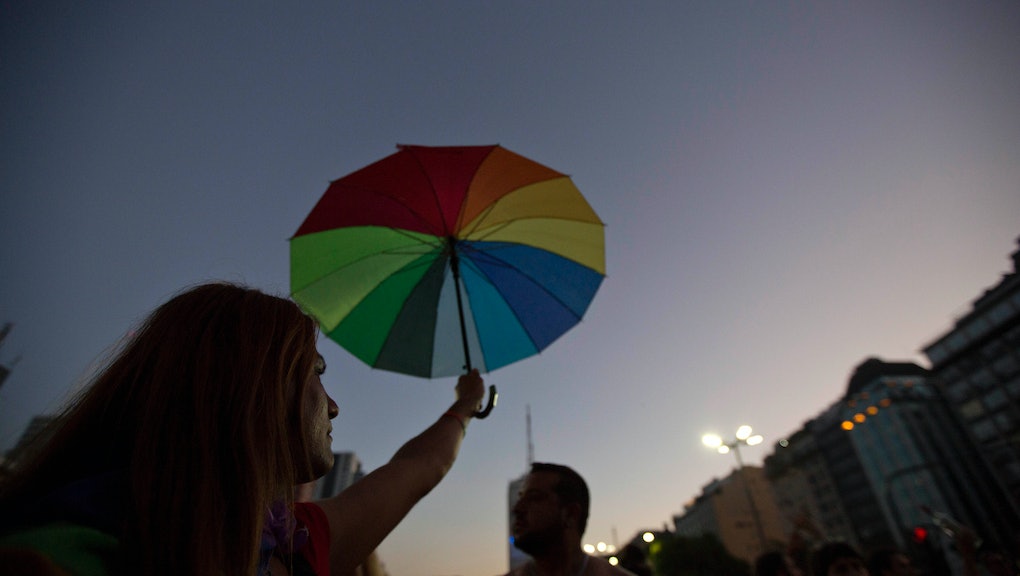 Skylar Lee and the Crisis of Transgender Youth Suicides in America

On Friday, people who knew and loved Skylar Lee, a 16-year-old transgender boy who died by suicide in late September, gathered for a memorial in his hometown of Madison, Wisconsin.

Lee was a prolific and widely respected activist who took his own life Sept. 28. In a Tumblr post that's since been removed, Lee wrote he did not want to become a symbol for the rash of transgender teen suicides: "Don't turn my name into a hashtag." But as friends and admirers remember his life, the reality of his death is hard to escape: He is one of at least a dozen known transgender teenagers who have died by suicide in the past year.

Lee was acutely aware of these dangers. In a video he recorded to bring attention to transgender youth suicides before his death that was replayed by Democracy Now! he said:

"Forty percent of transgender youth report having attempted suicide. People say that 'it will get better.' But what would happen if we invested our resources in the development and well-being of our youth? If I had a trillion dollars, I would spend money to create education programs designed to combat the system that sets youth of marginalized identities up for failure."

Losing lives at alarming rates: David Bond, the vice president of programs at the Trevor Project, a suicide prevention organization geared toward LGBT youth, detailed how the United States needs to change its approach to suicide prevention.

"Suicide is a public health problem that merits greater attention from our health care system," Bond told Mic. "It's the second leading cause of death for people ages 10-24, but it receives a tiny fraction of research and public health funding."

To illustrate how prevention measures can be effective, Bond used a metaphor.

"Emergency rooms are built to save lives, but seat belts are meant to save a life so that an emergency room visit isn't necessary," Bond said. "Prevention measures can work in the same way for suicide. Increasing public awareness informs people in need that there is help available. Decreasing the stigma around the suicide discussion increases the likelihood that someone will reach out for help."

Bond said young trans people are very likely to experience discrimination, fear and rejection, "which increases feelings of hopelessness and contributes to thoughts of suicide as a solution to the problem. If we can work to instill hope and create safer and more inclusive environments for transgender individuals, we can decrease risk."

There have been at least half a dozen suicides among transgender teens this year. The Advocate has kept a heartbreaking list: Leelah Alcorn, the 17-year-old in Ohio who died last December; Blake Brockington, the former North Carolina prom king who died in March; Kyler Prescott, the 14-year-old who passed away in May; Sam Taub, 15, died in April; Ash Haffner, who was 16, died in March.

Suicide undoubtedly affects people ages 10 to 24, but the risks for LGBT youth are much higher. Lesbian, gay and bisexual youth are four times more likely to attempt suicide than their straight peers. Numbers for transgender youth are harder to gauge because so little reliable demographic data exists on transgender communities. The data that is available, though, paints a deeply distressing picture. According to the Trevor Project, nearly half of young transgender people have seriously considered suicide, and a quarter have attempted it.

Those numbers have led advocates to try to intervene in schools, the institutions that often have the best ability to reach young people for hours at a time. Kari Hudnell, who works with the Gay, Lesbian & Straight Education Network, told Mic that such interventions can be crucial. Hudnell identified four important aspects of trans-inclusive education: having supportive educators, on-campus clubs and student groups that focus on gender identity, implementing an inclusive curriculum and adopting anti-bullying policies that specifically address sexual orientation or gender.

"It's better to be proactive and you don't see a lot of the issues that come up around name changes, facilities, [and] pronouns, [which] can make a big difference in making students feel like they're not different," Hudnell said.

Remembering Skylar: Avi Lee, Skylar's older brother, later wrote on Tumblr that his death not be sensationalized, and remembered the 16-year-old this way:

Lee was a deeply committed activist who identified as transmasculine. Madison's Gay Straight Alliance for Safe Schools remembered him as an "influential youth leader" at GSAFE. His acute understanding of how his life was shaped, but it defined, by his identities lives on in a piece he wrote for Power in Partnerships, a report by the Advancement Project, Equality Federation Institute and the Gay Straight Alliance Network about the school-to-prison pipeline.

"We cannot separate the conversation between racial justice and LGBTQ justice when our oppression and liberation are interconnected with one another," Lee wrote. "Our identities are intersectional simply because we exist; to say that they are separate enforces White supremacy, creating a culture where it is acceptable for queer and trans POC to be invisible and pushed out of society. We must understand intersectionality to truly be a united force in the fight to dismantle these systems of oppression."

In a touching letter published on Medium shortly after Lee's death, one of his best friends, Foster Noone, wrote Lee was "was sarcastic and brilliant and genuine and sweet and wanted to heal the entire world. He loved his dog Nugget, selfies, pop punk music, flowers, fruit, his 'grunge norm core aesthetic' and writing letters. We met through the national organizing work we did together with GSA Network and bonded immediately in that fierce, intense way that one does when you meet someone you love in such a close space. We talked every day and I am just beginning to come to terms with the fact that we will not grow old together."

For a community that once again finds itself in mourning, the journey toward answers — and prevention — continues.

If you or someone you know is considering suicide, there's help. The National Suicide Prevention Lifeline is available 24/7, with services in both English and Spanish. Call 1-800-273-8255. If you identify as LGBT or gender non-conforming and are 24 years old or younger, you can reach the Trevor Project Lifeline at 1-866-488-7386.