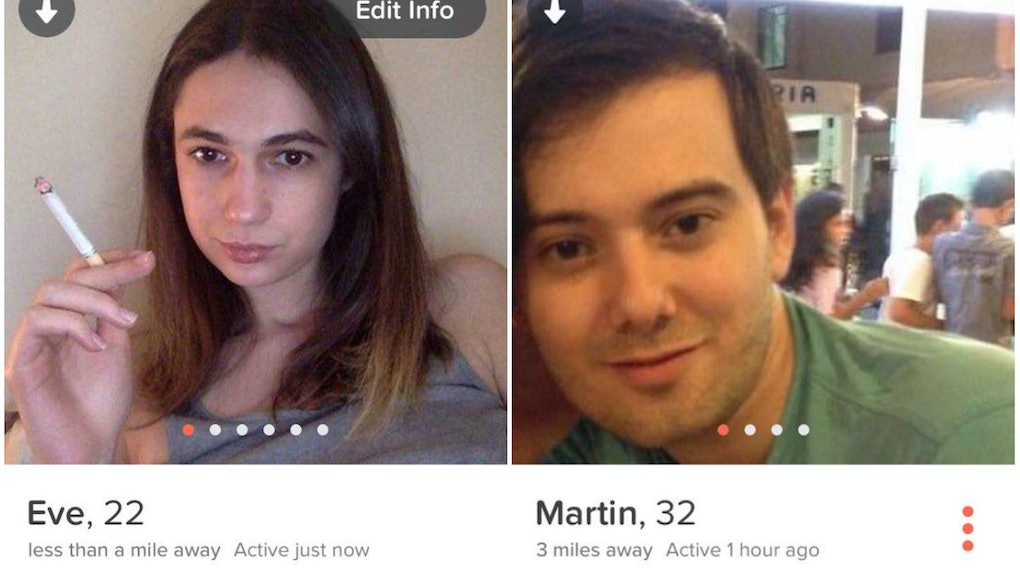 Tinder is a vast expanse of lonely millennials looking for some form of connection, offering the promise of either a one-night stand with a total stranger or the promise of everlasting love (or at the very least, someone to get brunch with). Out of the millions of eligible bachelors using the app in New York City, I was lucky enough to match with Martin Shkreli, aka one of the most hated men in America. Or perhaps I was unlucky. I'm not sure yet.

Shkreli is better known as the AIDS drug bro, or the guy who tried to raise the price of the drug Daraprim, which is used to help manage AIDS patients' symptoms, from $13.50 to $750 per pill. Needless to say, he was publicly shamed by most media sources for this, with the Daily Beast declaring him "Big Pharma's biggest asshole."

What Shkreli did was not exceptional: As the New Yorker points out, jacking up drug prices is completely legal and many drug companies do it. Perhaps this price-gouging didn't go unnoticed, as it usually does, because Shkreli himself is so tailor-made for viral infamy. He's a fan of emo music, he once offered to pay an ex-girlfriend $10,000 to eat her out and he sent the following letter to an employee's wife: "I hope to see you and your four children homeless and will do whatever I can to assure this." His story went viral in large part because he is the perfect media punching bag, the Big Pharma bro we all love to hate.

So when I saw his face pop up in my Tinder matches, I had to swipe right, especially because I had just written an article mocking his OkCupid account. I immediately knew it was him, although his profile description, "American entrepreneur," was a little vague.

As a budding young journalist, the prospect of being able to ask Shkreli whatever question I wanted was exciting. But I swipe right on Tinder to any familiar face, be it a former college friend or a minor celebrity (for instance, I once matched with Saturday Night Live "Weekend Update" host Michael Che).

Mostly, I wanted to have a conversation with Shkreli on Tinder because even though I thought all the negative media attention he'd received was well-deserved, I still suspected he was exceptionally unlucky. I was curious to know how he felt about being pilloried for something his industry did on a regular basis. But I also wanted to know why he did what he did. I wanted to hear him justify the price-gouging. I wanted to understand the stories that greedy people tell themselves so they can function in the world. Tinder was the perfect medium to ask him these questions.

Although I initially tried to make it seem like I was interested in a romantic tryst with him by asking him "Up to anything fun tonight?" I couldn't keep that up for very long. Perhaps it's not in my delicate nature to romantically entrap people, but more likely, I couldn't resist asking him if he was "DTGMAD," or "down to give me AIDS drugs?"

When he turned out to be a surprisingly good sport about the quip, responding with an "lol," I decided to probe him more about the scandal. "It's fine," he said. "The media and public don't want to look past a headline."

"How do you wish the media would have told the story?" I asked. I wanted to have a dialogue with him, instead of mocking him as everyone else on the Internet had already done.

"Accurately would be nice haha," he wrote.

With our rapport established, I moved the conversation to the next level. I told him exactly what I thought of his story: that he was really just participating in the American capitalist system, which privileges profit over compassion.

I'd figured that having a debate about capitalism with a hedge fund manager and entrepreneur would be futile, and as it turns out I was right: Shkreli wasn't really interested in debating the merits of a system that had made him wealthy. "Of course not," he said when I asked him if he thought capitalism wasn't inherently evil. "Look at the best capitalists giving away all their money."

I asked him if he thought he was the "Snowden of AIDS drugs." He didn't respond, having apparently either blocked or unmatched me.

At first, I wanted to talk to Shkreli on Tinder partially because I wanted to validate my perception of him, because in my mind he was so clearly in the wrong. But when he gave me a cordial response to my questions, I started developing empathy for him.

My screengrabs of my conversations with Shkreli on Tinder have since gone viral. The attention I've received since has been both overwhelming and exciting. As someone with a history of mental illness and someone who was bullied for the majority of my childhood, it makes me anxious to be receiving this degree of attention.

But I can't help thinking that the same must apply to Martin Shkreli. Even though he has made decisions that I think have made the world a worse place, I can't begin to imagine what it feels like to be on the receiving end of so much Internet outrage. After all, the guy can't even Tinder anymore without his conversations going viral.

I would never go out with Martin Shkreli; I prefer to date men who have demonstrated the capacity to feel empathy. I also don't think Martin is the Edward Snowden of AIDS drugs, though I was wondering if Shkreli thought of himself that way.

But matching with him on Tinder did make me think of him as a real person, in a way that I wouldn't have from just reading a news story about him. It also made me think of the other matches I get on Tinder as more human as well, which I don't always ask myself when I'm just swiping right and left blindly. "If the Tinder game can connect virtual partners to real-life fucking more quickly, it is not wrong to want it," I wrote with my friend Alicia Eler about Tinder back in August. "So ask yourself as you swipe on faces: Do I want that in my home?"

Did I want Martin's face in my home? Certainly not. But I do believe that Martin Shkreli believes he is doing good for the world, or else he wouldn't have engaged with me. And even though Martin Shkreli is the current face of all that is wrong with capitalism, I do have sympathy for the guy. After all, even questionably sociopathic pharma bros deserve to get laid.