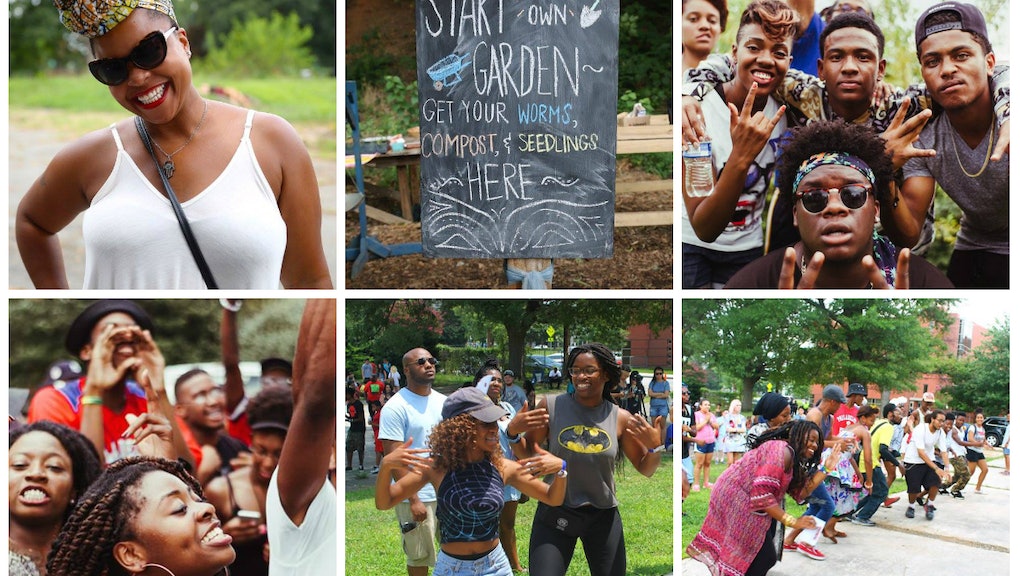 Robert "Lil Bobby" Hutton earned many firsts as a teenage member of the Black Panther Party for Self-Defense in the late 1960s. A native of West Oakland, California, he was the party's first official recruit shortly after it was launched by Huey Newton and Bobby Seale in 1966. Just a year and a half later, he became the first Black Panther to be killed by police after he was ambushed on April 6, 1968.

Each year, the park in West Oakland that unofficially bears his name hosts one full day of a festival dedicated to doing what he, and so many young black men like him since, have been denied: the right the live.

Now in its eighth year, the Life is Living festival, which kicks off in Oakland this weekend and usually draws at least 1,000 attendees, manages to bring together ideas about environmental and cultural sustainability that include some of the most prolific black political rappers today. Its performers have included Mos Def, Talib Kweli, Pharoahe Monch, Saul Williams, Rebel Diaz, Goapele and Shock G of Digital Underground, the Oakland-based hip-hop group that gave 2Pac his start.

Since its founding in 2008, the festival has spread to six different cities, including New York, Atlanta, Philadelphia and Chicago. The festivals feature everything from free breakfast (a staple of the Panthers' legacy) to graffiti battles, skate parks, drum circles and a program dedicated completely to kids' creativity. None of the attendees pay to attend.

The festivals are produced by Youth Speaks, the nationally recognized literary arts organization best known for its annual spoken word competition Brave New Voices, which has been featured as a documentary series on HBO. When asked how the festival pays for itself financially, co-founder Marc Bamuthi Joseph, who now works as chief of program and pedagogy at San Francisco's Yerba Buena Center for the Arts, replied, "Barely."

Joseph said, "What sustains the festival isn't financial, it's emotional." The festival sustains itself on a budget of just over $100,000, including staff time from Youth Speaks.

It's a paltry sum when compared with the fact that artists at other festivals command that amount alone for their performances. "We rely on community members to contribute to the festival based on the guiding question, 'What sustains life in your community?'" Joseph said.

That question has long been central to Oakland's identity, and has animated discussions about police brutality and gun violence in black communities across the country in recent years. Despite a decline in homicides in other cities, Oakland's murder rate has remained stubbornly high, usually netting the city a spot on America's list of deadliest places. As homicides rates have trickled upward this year, heartbreaking stories have made headlines in Oakland. Last week, an 27-year-old artist named Antonio Ramos was shot and killed in broad daylight while working on an anti-violence mural beneath a busy freeway underpass. In March, Chyemil Pierce, a 30-year-old mother of three, was shot and killed while trying to shield her children from an afternoon gunfight.

That deadly reality has long existed in a place locals affectionately call "The Town" but has been magnified over the last decade by the steady creep of gentrification. As wealthier and, often times, whiter residents move into Oakland's historically black neighborhoods, including West Oakland, the spaces where black people celebrate their lives continue to dwindle. In the two decades between 1990 and 2011, Oakland lost half of its black population.

Rent in some neighborhoods has skyrocketed by 30%, according to a report from  the Alameda County Public Health Department and Causa Justa/Just Cause, a local community group. Last month, the University of California, Berkeley's Project for Urban Development released a series of interactive maps detailing the Bay Area's most gentrified places. In those maps, many Oakland communities were found to be in what researchers called "advanced stages of gentrification," areas that have experienced the biggest demographic change in recent years.

"In these moments when our economic vitality is under attack, we need spaces to be fully and wholly ourselves," Joseph said.

Life is Living has become one of those spaces. It began as a way for artists and activists in the city to create their own interpretation of environmental justice. At the time, "going green" was all the rage — then-presidential candidate Obama promised upwards of 5 million so-called "green jobs" and later devoted $90 million of stimulus funds to an assortment of clean energy programs — but much of the discussion about sustainability was being led by white environmental justice activists and organizations.

"We wanted to mute this hierarchical and segregated approach to ecological vocabulary and highlight ways in our own communities we weren't living green, but we were living our lives and what a beautiful emblem that was in term of a total ecological picture," Joseph told Mic.

Isa Nakazawa, a Youth Speaks staffer who has been involved in producing the festivals for years, said the festival's focus on life is especially important given today's political climate, and that a park named for Lil' Bobby Hutton is the perfect home.

"The park is a project of memory and remembering, and also a vision of a new West Oakland that elaborates on its history," Nakazawa told Mic. "[The festival] came from an understanding that there was a narrative of death surrounding black and brown lives, while at the same time talking about going green and being healthy as a way to preserve white lives."

"It was a really dichotomous narrative," she said.

The festival works with more than 50 community partners, including food, jewelry and T-shirt vendors. It's also broken down into 10 to 12 of what organizers call "zones," ranging from community writing workshops to open mics, drum circles to comedy shows, community theater to children's art programs. This year's festival theme is centered around dance, and one of the goals is to produce the world's longest soul train lines.

Bayana Davis is a 21-year-old Oakland native who grew up attending the festival largely because her father, Hodari Davis, co-founded it. "I've always loved Life is Living specifically because it was in the community that I was growing up in," she told Mic.

After years of volunteering, Davis will be stepping in as one of its many full-fledged organizers this year. She said, "I would work at the festival even if I wasn't asked to do it."