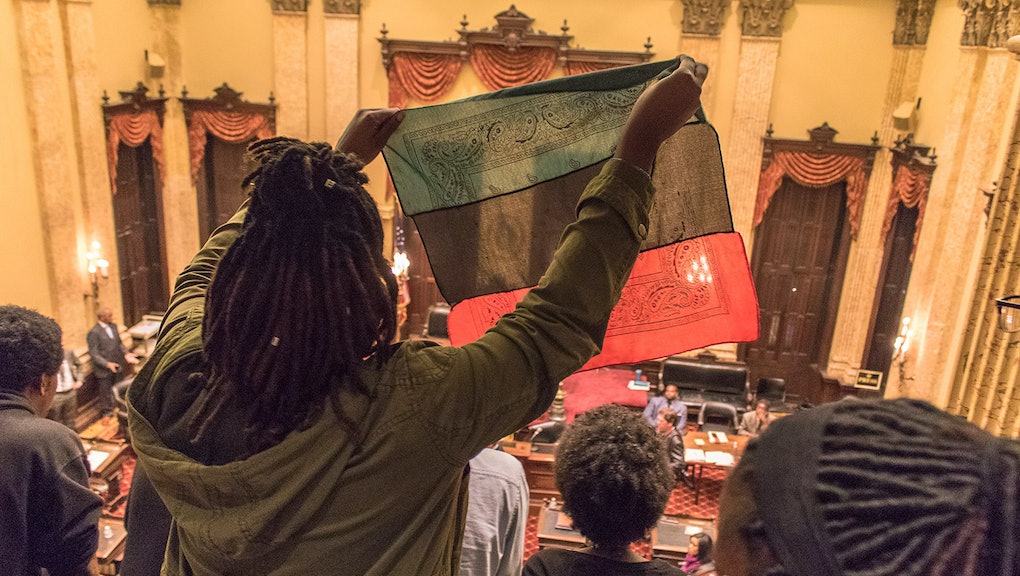 Early Thursday morning, between 12 and 16 protesters were arrested after occupying Baltimore City Hall to protest the permanent appointment of Interim Police Commissioner Kevin Davis. Local protests have drawn national attention with the city's political upheaval this year: the April death of 25-year-old Freddie Gray while in police custody, the days of protests and riots that followed and the looming trial of six city police officers who have been indicted in the case. These protests, however, are distinct for one main reason: They were organized and led primarily by high school students.

The majority of those arrested on Thursday were young people and allies from a collection of community-led student organizations. Makayla Gilliam-Price, a student at Baltimore City College (a high school) and a founding member of youth-led organizing group City Bloc, was among those arrested. "As a 17-year-old organizer and black girl from Baltimore, my voice has been silenced on many platforms," she told Mic.

The protesters sat in an upstairs balcony of City Hall starting at 5 p.m., during a subcommittee meeting on Davis' permanent appointment, listening to hours of testimony. "We didn't want to interrupt concerned citizens," Michaela Brown, a 23-year-old communications director for Baltimore Bloc, a community-based organization, told Mic. "If we're here to give the people a voice, we shouldn't take the voices from other people."

She said the protesters wanted the city's leaders, including Mayor Stephanie Rawlings-Blake, to acknowledge and agree to a list of 19 demands, including establishing more community-friendly policing and refraining from blocking cell phone use during unrest, they say would increase police accountability in the city.

After the subcommittee voted 3-1 for Davis, moving his permanent appointment one step closer to reality, Davis actually praised the protesters, calling their actions "an act of civil disobedience," according to the Associated Press. "It's all part of the healing process," he said, according to the AP. "The fact that this occurred isn't upsetting. It's just part of where the city is right now. I understand where they are. I understand their frustration ... I promised the citizens of Baltimore and the protesters that I'll be the type of police commissioner that they deserve. This is just part of where the city is right now, and if we're going to get to the other side of this, we have to go through these moments."

But when protesters moved forward with their action by refusing to leave City Hall, then linking arms and singing protest songs, police reportedly turned away other supporters who wanted to give the young protesters food, nor were they allowed to use the bathroom in groups. Protesters said they also cut off nearby electrical outlets so they couldn't charge their phones, hindering communication with those outside of City Hall. "It's interesting that Davis says he doesn't want to criminalize protesters," Brown said, "but he sent in 50 police officers to arrest 16 mostly high school- and college-aged people."

Calls to both City Hall and the Baltimore Police Department were not immediately returned.

"For [myself] and the constituents I represent who don't have the right to vote, we are neglected in political discussions," Gilliam-Price told Mic. She described planning for the action to occupy City Hall, which began two weeks ago. "To activate our political agency and not back down was a showing of how you don't need to be co-opted by an adult organization to validate your political voice," she said. "It was an amazing show of force from Baltimore students and black youth in the city."