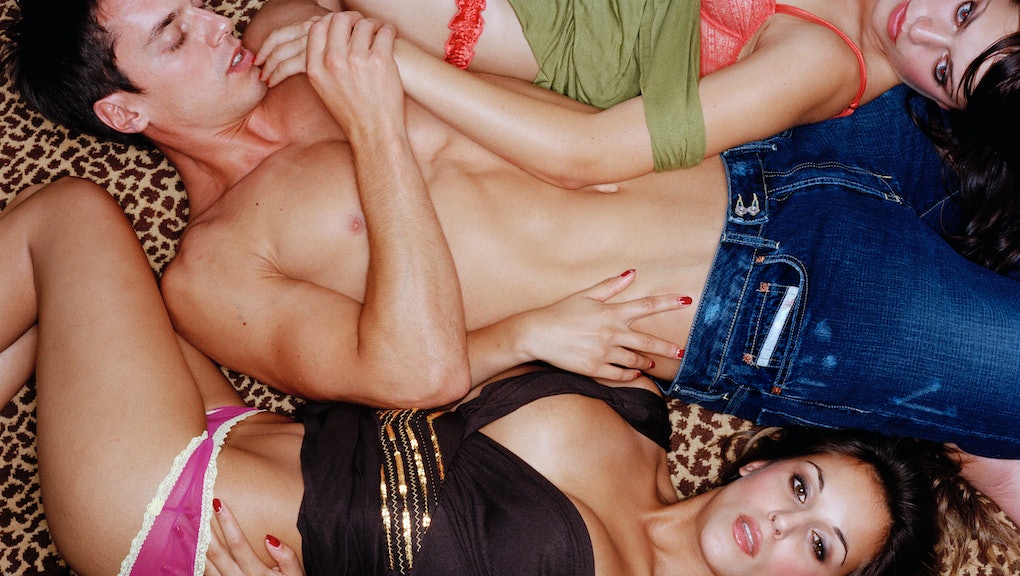 Are You a Heteroromantic Bisexual? A Guide to the Most Misunderstood Sexual Orientation

I realized I was attracted to girls when I was 9 or 10 years old, upon seeing Shannon Elizabeth's bare breasts in the unrated version of American Pie. I never told anyone because even at such a young age, I understood it was probably something I should keep to myself. Later in life, I was bullied throughout elementary school and junior high for being weird. The thought of also being bullied because I was gay was unfathomable to me.

My attraction to boys became apparent when I was 14, when I fell for a feminine-looking French boy. Fearing the social stigma of being bi — or, worse, fearing that "bisexual" would be perceived as code for "slut" — I made the decision to only hook up with boys throughout high school, telling myself that I would just repress my same-sex attraction forever.

But when I finally came out as queer in college, something peculiar happened: nothing at all. I went to Oberlin College, a liberal arts school where sexual experimentation might as well have been part of the curriculum. Considering how anxious I'd been about coming out as bisexual as a teen, it was both shocking and incredibly freeing to find that everyone accepted my orientation right away.

A few years later, I've stopped publicly identifying as queer; because I've never dated a woman, I didn't feel it was specific enough to me and my experience. Instead, I identify as a heteroromantic bisexual, which means that while I'm sexually attracted to men and women, I only date men. Figuring out a more precise descriptor of my sexual identity helped me understand who I am.

And I'm not alone.

When the Kinsey scale just doesn't cut it: It's no secret that our traditional conception of sexual orientation is rapidly evolving. With celebrities like Lily-Rose Depp and Miley Cyrus publicly coming out as sexually fluid, our culture is increasingly coming to terms with the idea that sexual attraction doesn't have to fit into a strict binary.

"Heteroromantic bisexual" (or "bisexual but hetero-amorous," as Dan Savage calls it) falls into this category. It's a term used to describe those who are attracted to both women and men but are exclusively romantically involved with members of the opposite sex. In an April 2015 piece for Cosmopolitan, writer Michelle Ruiz didn't explicitly use the term but did outline the dynamic of women who sleep with women, specifically: They're ladies who "self-identify as straight, who want relationships with guys, but also enjoy a woman's body and affection here and there."

Timaree Schmit, a sexologist with a Ph.D. from Widener University, told Mic that this orientation is more common than we think.

"We're starting to understand the complexity of sexual orientation and it seems like everyday people are coming up with a construct that resonates with folks, who are like, 'Oh, that explains my experience!'" Schmit told Mic.

It's increasingly common for people who feel their orientations fall outside the heterosexual/homosexual binary to come up with terms that describe the gray areas in between: "Everything we come up with to be more specific is further identifying the realities of human desire."

As the concept of sexual fluidity enters the mainstream, so too has the traditional coming-out narrative changed. Indeed, when I put out a call for people who identify as heteroromantic and bisexual, I received an outpouring of responses from women who exclusively dated men but also slept with women. While many of them said they were out to their current romantic partners, the majority of them were not out to their families.

"I know their question-asking — whether based in prejudice, judgment, stigma, whatever — would cause too much anxiety," Alli, 25, told Mic. "I don't like when all the eyes are on me."

Claire*, 26, who is in a long-term heterosexual relationship and identifies as a heteroromantic bisexual, said that her homophobic aunt panicked and told other members of her family when she saw that Claire changed her sexual orientation on Facebook to "interested in men and women." So she quickly changed it back to "interested in men."

"I just do not talk about it with my family anymore," Claire told Mic. "I don't consider it a central part of my identity by any means, so it's not that big a deal, but every once in a while I will be like, 'Oh, I wish they knew about this,' because they know literally everything else about me. It's a little complicated."

When sex and emotions diverge: Although people might separate their romantic orientations from their sexual orientations, some feel that these distinctions are problematic and steeped in centuries of homophobia. Charles Pulliam Moore discussed the phenomenon of "bisexual but hetero-amorous" men in a Thought Catalog piece and how their willingness to have sex with men, while withholding the emotional attachment, prevents them from being accepted by both the heterosexual and LGBT communities.

"Bisexuals get a bad rap for not being able to explain their emotional actions that seem so incongruous with their sexual proclivities. That doesn't need to be the case," Moore wrote. "If more bisexual people could express that sentiment to their partners I'm willing to bet that the rest of us wouldn't be so hostile towards them ... [they've] got to be upfront about what it is that they want and who they want it from."

Others take issue with the concept of a heteroromantic bisexual for different reasons, arguing that the science of attraction is too complex to compartmentalize into "romantic" and "sexual." Aleta Baldwin, assistant professor of public health with California State University at Stanislaus, argues that sexual orientation and romantic orientation cannot necessarily be decoupled, and rather questions the concept of an "orientation."

"Rather than begin from the idea that there is a disconnect between sexual and romantic orientations, I would question the conflation of sexual attraction, sexual behavior and romantic attraction into one concept: orientation," Baldwin told Mic.

When I put out a call for people who identify as heteroromantic and bisexual, for instance, I expected to mostly receive responses from women, as women statistically self-identify as bisexual more often than men do. I was surprised to receive an outpouring of responses from men, who felt they couldn't be fully open about their sexuality due to fear of alienating male and female partners.

For heteroromantic bisexual men, coming out to their female partners can have unintended consequences. Nate*, 25, said that "a notable portion of (cis) women I have been with and around seem to harbor a mistrust regarding bisexual men for fear that they could just be closeted and gay... A fair amount of women lose interest in me upon learning my sexuality."

Steve*, 30, self-identifies as a heteroromantic bisexual but said he prefers to let people assume he's purely heterosexual "for convenience's sake." "For one thing, if the people where I worked knew I was bi or was even ever curious, I would be mocked mercilessly to the point where I wouldn't be able to do my job," he told Mic. "It's a blue-collar environment, so I'm mostly keeping myself safe."

Steve, who played football in high school, began to hide his sexuality after a close friend told the team that he had dated a man. "I started noticing that people were starting to aim for me instead of the ball carrier during practice," he told Mic. "They would ... kick me and basically do whatever. I learned later that the coach turned his eye away because he heard I was a 'queer.'"

"Even though high school is long over and the world is a slightly different place, I'm still afraid that I will be beaten, mocked and judged for something as trivial as who I want to have sex with," he told Mic.

More than 50 shades of gray: Most people think that sexuality lies in three basic categories: homosexual, heterosexual and bisexual. Sexuality is also perceived as something stable: Once you're out, you're out. And if you don't ever come out, you're straight — full stop.

Our culture is slowly but surely realizing that there are many shades of gray when it comes to sexual orientation, and we're creating the space for sexual identities that weren't previously acknowledged. While some might question the validity of these identities, it's clear that they help us make better sense of our sexuality and our world.

That said, while using the label "heteroromantic bisexual" has clarified my sexuality for myself, I'd rather do without the labels to begin. Labels suggest that sexuality is somehow fixed, when in reality, it's forever in flux. This fixed perception of sexuality is also why I haven't come out to my family and many of my romantic partners; I don't want to be seen as fickle. I know this speaks to larger issues about how our culture perceives bisexuality, but like Steve, I can't help not wanting to be judged regardless.

As people find more specific ways to identify their sexual and romantic orientations, we should reconsider why it's important for people to come out, and how sexual attraction relates to identity. And as we come up with more and more labels to describe who we like having sex with, we might find that in the end, we don't need any labels at all.

* Names have been changed to allow subjects to speak freely about private matters.

This article was originally published on Oct. 20, 2015