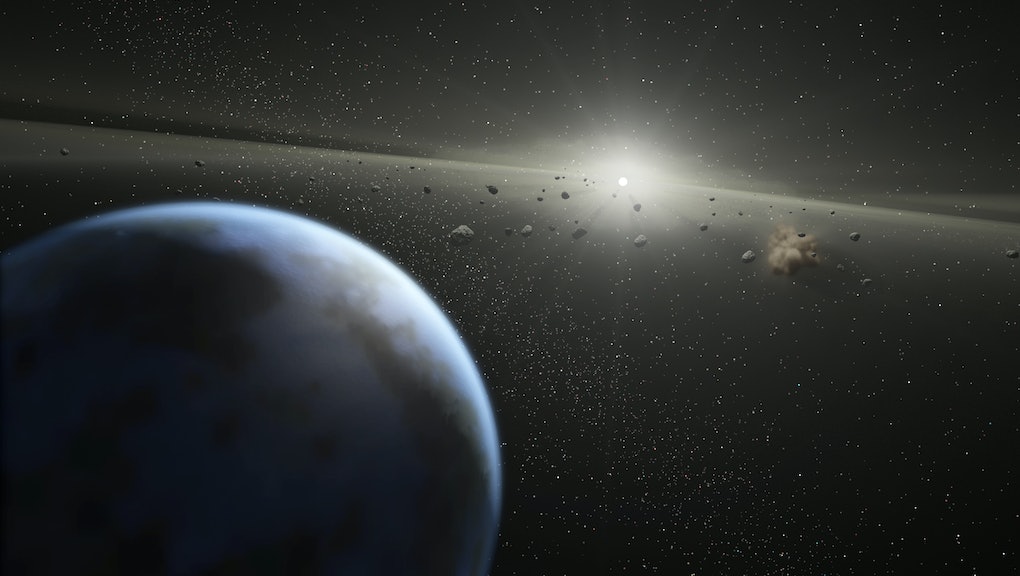 A Huge Asteroid Is Flying Dangerously Close to Earth on Halloween

Halloween 2015 just got a touch more foreboding thanks to a massive space rock hurtling near to, though not directly at, Earth's surface. NASA's Panoramic Survey Telescope and Rapid Response System identified the asteroid on Oct. 10 and subsequently published a report on the massive object, which is named 2015 TB145. According to the report, the asteroid will bypass Earth on Oct. 31 at 1:12 p.m. Eastern at a distance of 1.3 lunar distances, or about 300,000 miles.

Based on NASA's data, Earth Sky estimates the asteroid measures somewhere between 689 and 2,133 feet. Its notable size makes it the largest asteroid to skirt Earth since 1999, and it will be August 2027 before another astroid of this caliber makes a showing.

Because of its size, NASA said the asteroid is an ideal target for radar, and the organization plans to capture images of the giant mass. For everyone else, planning an asteroid-viewing Halloween party may be a bit of a stretch, as it will be difficult to see without advanced telescopes.

"2015 TB145 could reach 10th magnitude before sunrise on Oct. 31 for observers in North America, but it will be close to the waning gibbous moon and probably challenging to see with small telescopes," NASA writes in its report. "The asteroid will be in Taurus at the time of closest approach. After closest approach, 2015 TB145 will be a daytime object and too close to the sun to observe with optical telescopes."

As news of coupling a near-apocalypse with the darkest holiday of the year picked up on Wednesday, #HalloweenAstroid began to spread across Twitter:

Judging by NASA's measurements, the "Halloween Asteroid" poses no real threat to Earth. However, considering October began the first-ever independent space race to the moon, a Super Blood Moon happened in September and both water and Matt Damon have made recent appearances on Mars, we can add the asteroid to a running list of reasons why a Halloween 2015 party should be a space-themed affair.