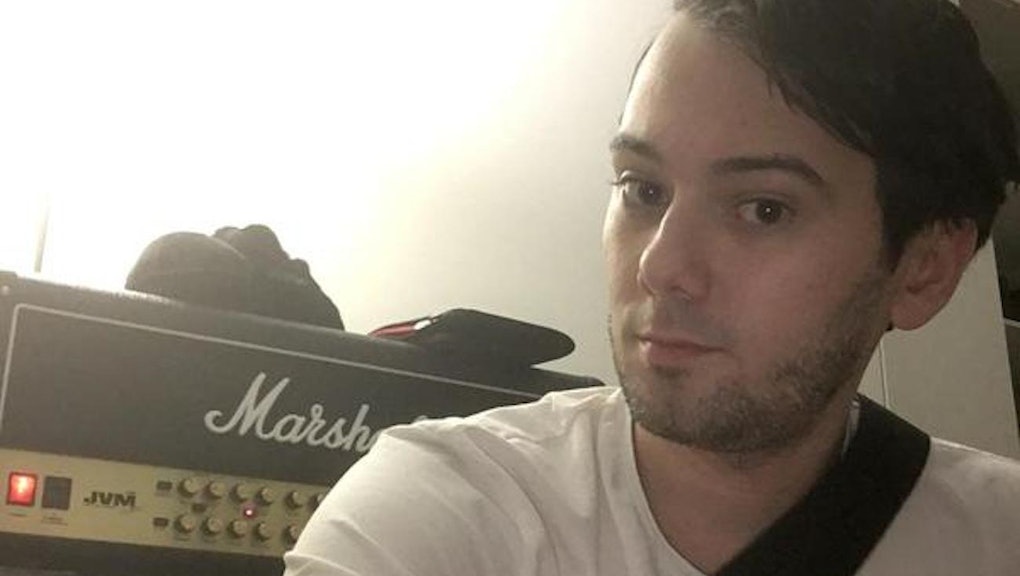 For the Internet, Martin Shkreli is like Donald Trump or pumpkin-spiced flavored products in the fall: a gift that keeps on giving.

A former hedge fund manager and pharmaceutical executive, Shkreli became well-known for his douchery back in September when he raised the price of the AIDS treatment Daraprim from $13.50 to $750 per pill. In the viral shit-storm that ensued, Shkreli was crowned the "most hated man" on the Internet, a reputation that he readily owned up to when I matched with him on Tinder earlier this month.

Most people who become Internet infamous overnight would likely balk at such a title. They'd go on digital hiatus for a bit or maybe hire a publicist specializing in reputation rehab. Even the Fat Jew, who has publicly likened himself to George Washington and Michelangelo, issued a mea culpa of sorts after he was accused of plagiarism.

But Martin Shkreli has clearly chosen a different path. In fact, he seems to embrace his role as "big pharma's biggest a**hole." In a recent Reddit "Ask Me Anything," he even claimed that it was helping him get laid:

It's official, folks: Martin Shkreli is the patron saint of the fuckboy.

A very brief history of fuckboy-dom: Sometimes stylized as "fuccboi" or "fuckboi," the term "fuckboy" has many definitions, which have evolved over time as white people have increasingly appropriated the phrase. In an article for Jezebel, Julianne Escobedo Shepherd described a fuckboy as "a streetwear trend-humper," someone who has "a certain blend of awkwardness and thirst, combined with lots of disposable income."

But a true fuckboy isn't defined by wealth or social status so much as he's defined by the general belief that the world owes him a favor. As Alana Massey wrote for Pacific Standard, "fuckboy is not a dating style so much as a worldview that reeks of entitlement but is aghast at the prospect of putting in effort." In short, a fuckboy is the embodiment of straight male entitlement.

A fuckboy would have the gall to boast to strangers on Reddit that raising the price of a life-saving drug by 5,000% is a tool to help him get laid. (Side note: I want proof of this "very, very long line" of women. If you're currently waiting in this line and want to talk to me about why you want to fuck the most hated man in America, please send me an email.)

And a fuckboy is certainly someone who would pose like this for a picture:

Shkreli has covered all the fuckboy bases. Not only has he demonstrated little remorse for raising the price of Daraprim, but he also freely admits that this negative press is working to his advantage in the game department. And while there's some evidence on Twitter that this strategy is actually working, it's a pretty ballsy move for someone who has been accused of knowingly endangering the lives of millions of people around the world. (It's also a pretty shitty move for someone who at least implied on Reddit to be in a committed relationship.)

Shkreli sucks, but his suckitude is symptomatic of a larger problem: a straight white male sense of entitlement that has become endemic to our culture. Nowhere is this better demonstrated than on countless Twitter and Instagram accounts like Feminist Tinder and Bye Felipe, where women post screenshots of interactions with men who immediately criticize their appearance or demand nude photos. When the men are rejected, they lash out, calling women fat or accusing them of being sluts.

In my interactions with Shkreli on Tinder, he was fairly polite (though he later blocked me after I asked him whether he thought he was the "Edward Snowden of AIDS drugs"). Until recently, I hadn't heard from him since.

That said, allegedly offering a former sexual partner $10,000 for oral sex after she's explicitly rejected you or boasting about how much pussy you could be getting in a Reddit thread isn't just reflective of Shkreli's lack of respect for women. It's reflective of a culture that not only allows men like him to thrive but encourages them to hold onto the belief that the world owes them a favor.

More than just a troll: In the Reddit AMA, Shkreli admitted that in his free time, he enjoys "pissing off the Internet." But the truth is, he's doing much more than that.

Although Shkreli initially claimed that he raised the price of Daraprim to fund ongoing research, the Atlantic published an article in September debunking this argument. The piece went on to say that this excuse is used by many pharmaceutical companies to justify their price-gouging, but because "no major pharmaceutical company has ever been willing to disclose how much it actually spends on research and development," it often works.

In Shkreli's case, it didn't quite work. The Internet got ahold of the story and put his back and that of his company, Turing Pharmaceuticals, to the wall. But apparently, experiencing the wrath of the Internet hasn't made him question his ideals or his desire to put people's lives at risk for the sake of turning a profit at all. It seems to have only further cemented his belief that he is right, and he is doing the right thing.

After my Tinder conversation went viral, Shkreli was surprisingly mute. Maybe he's not as big of a fuckboy, I thought. After all, a fuckboy wouldn't stay silent after something like that, because a fuckboy always needs to feel like he's in control of the situation, particularly if he feels a woman has rejected or humiliated him.

But this past weekend, Shkreli finally broke his silence:

And of course, telling a woman you once tried to hook up with that she's ugly after she rejects you is one of the biggest fuckboy-isms of all.