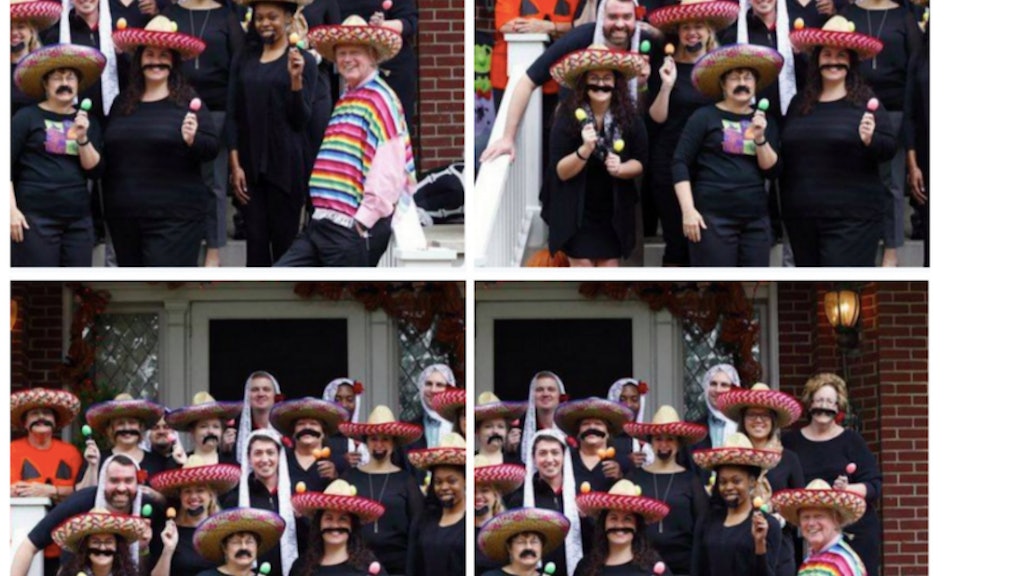 This College President Just Mocked His School's Most Vulnerable Students

Somehow, several administrators at the University of Louisville thought this would be a good idea:

The school's president, James R. Ramsey, is pictured in the photo on the far right, wearing a striped poncho. The Louisville, Kentucky Courier-Journal reports that the photo was taken at a recent staff luncheon in which the president's wife, Jane Ramsey, handed out sombreros and fake mustaches for attendees to wear. The photos have understandably sparked outrage both on and off campus.

"I am surprised and also hurt," Sarah Nuñez, the school's assistant director of Latino/Hispanic Initiatives, told Mic. "I work hard to help Latino students feel welcome and supported, and this action seems to trump all our hard work."

That work has been especially important on a campus in which Latino students account for 3.6% of the school's total undergraduate students.

And many of those students are exasperated. "It's not just offensive to Mexicans; it's offensive to the immigrant community as a whole," Leonardo Salinas, a freshman at the university, told the New York Daily News. "Someone thought, 'Oh, this is a good idea.' How did it not click in anybody's mind that it was a very bad idea?"

The university issued the following statement:

To Hispanic/Latino Faculty, Staff and Students at the University of Louisville

The outcry isn't surprising. In recent years, college students of color have organized against racist Halloween and fraternity parties on campus. In 2011, Ohio University group Students Teaching About Racism in Society started a campaign called "We're a culture, not a costume" to bring awareness to the harm that racist costumes cause students whose race or culture is mocked in them.

Those working toward racial equity on Louisville's campus hope that this incident can spark similarly productive conversations. "Administration has reached out to students, faculty, staff, and alum to hear concerns," Nuñez told Mic. "We are going to use this as an opportunity for the campus to come together — learn, heal and become stronger."