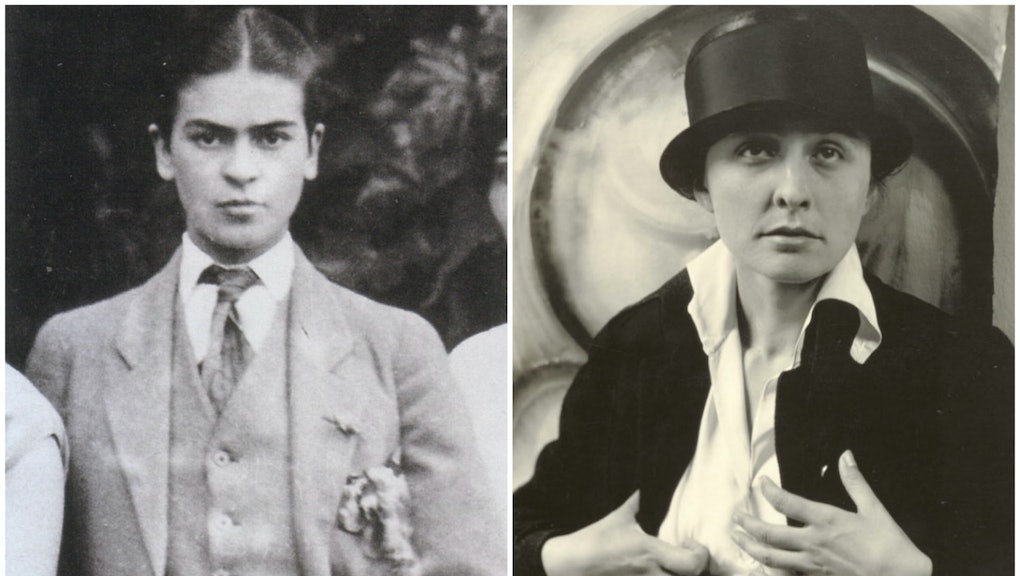 Before Tootsie and Yentl, there was Frida and Georgia.

It seems like everyone these days is talking about clothing that bends or totally subverts traditional gender expectations. From celebrities — Jaden Smith rocked a dress this year, while Kanye West spoke fondly of his leather kilt — to A-list designers waxing poetic about a gender-free world, there's a sense that the longtime categories of "mens clothes" and "womens clothes" are undergoing an awesome, much-needed breakdown.

But the tossing aside of gender norms with the help of clothes isn't exactly new. Can you name both of the famous female artists from the 20th century who posed for photographs in mens clothing? Or the male rockstar who proudly went to parties in dresses?

Certain clothing items don't inherently belong to certain gender identities, but society has long operated as if they do. Defying those expectations can take courage, or a healthy dose of IDGAF attitude. The motives of those who dipped into other wardrobes are all distinct — some coming from a place of need and safety (like our childhood hero Mulan), others out of desire for freer expression of gender and sexuality and some merely for creative kicks.

So Mic decided to shine a light on a few of the people who dared to go there, and rocked some seriously cool gender-swapped looks long before chic "androgyny" was ever a thing.

How could someone so creative and stereotype-smashing like Kahlo not dabble in fluid dressing? According to several photographs from the 1920s, the Mexican artist did, and she looked better than you ever will in your family portraits.

Vintage images show Kahlo in a variety of suits and slicked-back hair, standing tall on her own or with her hand confidently draped on a patriarch's shoulder. This was the mid-1920s, and here was Kahlo laughing in the face of society's beauty standards and expectations in a three-piece suit, while the women around her wore traditional flouncy, below-the-knee dresses. It's just more proof that Kahlo always did whatever she damn well pleased — and looked great while doing so.

We can only dream of being so fabulous.

Known for her bold, up-close images of flowers and New Mexico landscapes, O'Keeffe was an artistic force to be reckoned with. That's something photographer Alfred Stieglitz knew in 1918, when he asked O'Keeffe (his wife at the time) to pose for a number of portraits dressed in a black suit with an unbuttoned white shirt and a top hat.

While pop artist Andy Warhol wasn't a full-time devotee to the art of gender-swapping, he certainly embraced his feminine side. In a series of self-portrait Polaroids created with the help of photographer Christopher Makos in the early 1980s, Warhol sported typical women's wear, including makeup, in the hope of elevating the art of drag and cross-dressing.

One of the portraits, "Self-Portrait in Drag," is currently exhibited at the Guggenheim Museum in New York City.

You didn't think the man behind that toilet in all those museums was ever not cool, did you? Well, it turns out, the artist Marcel Duchamp did enjoy rocking some gender-swapped fashion; he even influenced Warhol to do so. In a series of images taken by photographer extraordinaire Man Ray in 1921, Duchamp poses as his female alter ego, Rose Sélavy (sometimes spelled Rrose Sélavy), complete with a fur stole and an Art Deco-inspired hat.

Over the course of the decade, Duchamp posted as this alter ego several times and even signed a few pieces with the moniker and created a sculpture with the title, "Why Not Sneeze, Rose Sélavy?"

Now onto a literature lad who was far too cool for his time. Dating back all the way to 1916, Great Gatsby novelist F. Scott Fitzgerald was fond of wearing dresses, which he didn't mind being photographed in. For a series of promotion shots for Princeton's Triangle Club musical, The Evil Eye!, Fitzgerald donned an elegant Victorian gown paired with a wide-brimmed hat.

The pictures were later published by the New York Times, when they called out Fitzgerald for being "the most beautiful" showgirl in the production in their show review.

Lets bring this movement all the way back, shall we? For more than 500 years, Joan of Arc has been hailed in history books as a heroine and a great commander, so it's not surprising that when she entered battle, she wore a suit of armor typically donned by men. And in order to sneak into enemy battlefields during the war, she dressed with her hair cropped in a pageboy style.

But what many people don't know is that her insistence on male attire (for obvious protective reasons) was one of the factors that led to her downfall and death. Officially charged with several counts of "cross-dressing" in 1431, Joan argued to the court that she was wearing mens' clothing as protection on the field, and then would change into dresses after battle. She is also said to have worn mens' attire in prison, as a rape determent. But that argument did not stand up in court.

Later that year, she was condemned at the trial and sentenced to burn at the stake.

Always one to jump at the chance to blur gender lines, the Rolling Stones frontman has come to fully embrace the female persona. Publicly, Jagger has been photographed countless times, both candidly and posed, in a dress and sometimes even in full makeup. Back in 1969, Jagger even took the stage in London's Hyde Park in front of 250,000 people and performed in a short, white dress.

While Jagger is still a sex symbol, he also continues to be completely indifferent in the face of gender norms and, really, what's cooler than that?

Behind each of these transformations lies an entirely different story, some done for the mere fun of it, some to send a more serious message. Now, designers in the clothing world are getting smarter and more inclusive themselves, going so far as designing entire collections without a specific gender in mind, or incorporating traditional standards of both genders into a single item.

But however the story goes, past, present or future, it all boils down to a person not giving a damn what society expects of them — and dressing like it.