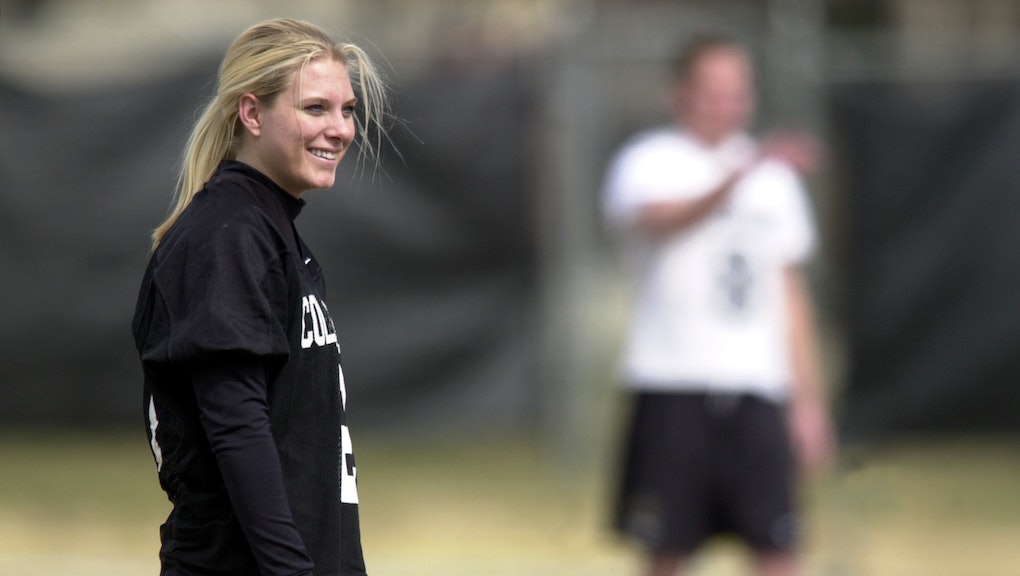 Katie Hnida fought plenty of battles when she made history as University of Colorado Boulder football's first female place kicker in the early 2000s. But the most enduring match of her career took place years after she left the gridiron and came out as a sexual assault survivor.

"It was a different world in terms of social media, and I think it was a good thing for me," Hnida told Mic of her playing days, which ended in 2004. "When I spoke out about being assaulted and my rape at CU, it was just unbelievable backlash I faced."

Hnida said the rape occurred in 2000. She transferred to the University of New Mexico a year later. But she went public with her story in 2008, at a moment when social media companies, notably Twitter and Facebook, exploded in popularity and she was exposed to unprecedented online harassment. But that growth also saw something more pernicious grow alongside it: more gendered harassment faced by women online.

"The rape threats are always the worst, the ones where somebody says to you, 'You deserve to be raped' or 'I would rape you too,'" Hnida said. "Being a survivor, that's the tone a lot of these trolls will take with women, and it's very disturbing to see that that's the route they often go."

The online harassment women face is a well-told story. In 2014, it bubbled to the surface of mainstream media with the GamerGate controversy, in which several high-profile women in the gaming industry spoke out about sexism and faced a barrage of coordinated online harassment, including rape and death threats. More recently, the popular music festival South by Southwest canceled two panels focused on talking about online harassment in the gaming community after receiving "numerous threats of on-site violence related to this programming." The decision prompted outrage and an exodus of participants and sponsors, including BuzzFeed and Vox Media, which led festival director Hugh Forrest to quickly reinstate both panels. "By canceling two sessions, we sent an unintended message that SXSW not only tolerates online harassment but condones it, and for that we are truly sorry," Forrest wrote in a statement.

But the sports world is an altogether different beast, according to the women who depend on it for their livelihoods. It's a male-dominated space in which even the best female athletes are openly body-shamed and subtle sexism is the norm. Legendary University of Connecticut women's basketball coach Geno Auriemma suggested in 2012 that women's basketball might be more entertaining if officials lowered the rims. That was roundly criticized by female basketball players. "When we're done making all those changes to 'improve' women's basketball, we'll end up with a product that looks a lot like it did in the 1950s, when women played a half-court game in skirts inside empty gyms, trying desperately not to sweat," ESPN's Kate Fagan wrote at the time.

But online, the harassment faced by women who dare to speak out about anything deemed remotely political is venomous. When WNBA superstar Brittney Griner came out as a lesbian shortly before being drafted in 2013, she was subjected to repeated online threats and charges that she "looked like a man." The abuse was so bad in college that her coach pleaded for it to stop in the media. (It's remained bad as Griner's private life has become public; she was arrested earlier this year for domestic violence after an altercation with her then-fiancée Glory Johnson.) The abuse is just as bad for women journalists who cover sports, as Julie DiCaro wrote recently in Sports Illustrated, who described repeatedly being called a "whore" and "skank" by trolls.

Hnida, who is now a public speaker and advocate who speaks out about violence against women, knows all too well how bad the abuse can get. "From what I can see from females who work in sports media, there's definitely a specific kind of harassment," she told Mic. "I do think that it's a special brand of troll who targets women in sports and is uncomfortable with women being in sports and takes it out in really terrible ways."

Why online abuse happens: Online abuse happens because offline abuse does. Deanna Zandt, a digital strategist and author of the book Share This! How You Will Change the World With Social Networking, told Mic that online experiences can often mimic those in everyday, offline social interactions. "People think that we've got this blank canvas that's the Internet," Zandt said. "But instead of using it in these super transformative ways, we're just painting existing structures onto that canvas."

Human brains aren't build for handing the nuances of digital communication, Zandt said. Social neuroscience is an emerging field, but one that's already discovered some important clues about why people say things online that they might never actually say in offline life. When humans physically interact with one another, they're able to pick up on nonverbal clues — tone of voice, facial expression — that help them situate another person's words. When those clues are missing, the brain automatically processes that information in the amygdala, which activates our body's fight-or-flight responses. "If you see something on the Internet that doesn't quite sit well with you, your brain reacts thinking it's being chased by cheetahs," Zandt said.

Of course, not everyone responds with sexist vitriol, and the root causes of that hatred are deeply rooted in society. But on some level, there are answers. "Where the intervention can happen is to train one another, in the same way we've all been trained in phone manners," Zandt said.

Staying sane: Today's athletes walk a thin line between building their brands and staying safe online. Layshia Clarendon is a professional basketball player for the WNBA's Indiana Fever who is openly queer and deeply Christian. Her signature look — a multicolored mohawk and an assortment of bowties — is conspicuously not gender-normative. "It was just me being who I was," she told Mic of her look entering the league in 2013.

In August, Clarendon wrote a widely praised op-ed for the Player's Tribune on learning to reconcile her faith with her sexuality. "I identify as black, gay, female, non-cisgender and Christian," she wrote. "I am an outsider even on the inside of every community to which I belong. My very existence challenges every racial, sexual, gender and religious barrier."

She and her partner initially worried about the negative feedback, but it wasn't nearly as bad as they expected. "Religion and faith are the one issue where people get crazy and lose their minds," she told Mic. "But I was shocked at the amount of positive reactions I got."

She credits that to being very careful about how she engages online. "Because I carry social weight as an athlete, I may text friends if I'm really angry about stuff," Clarendon said. But whenever she engages online, "it's always trying to start a dialogue."

The experiences of female athletes online are as varied as the women themselves. But each one navigates cyberspace like a dark alley: carefully, methodically and, at times, reluctantly.

That's put pressure on social media companies to better protect their users. In 2014, Twitter unveiled a form that people could fill out to report online harassment. (The move was made in conjunction with Women, Action and the Media, of which the writer and Zandt are board members.)

"We have to recognize that there is no such things as a neutral platform," Zandt said. "We like to think Internet software is neutral because it's code, it's a machine and it's unbiased and these things just happen, but the code that we write is as biased as we are."