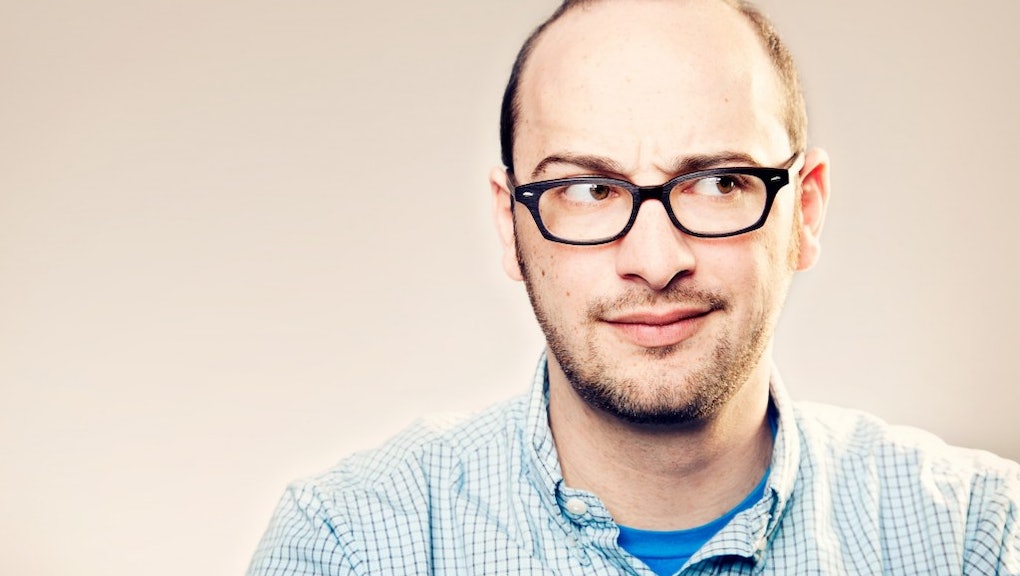 Comedian Josh Gondelman Is Proof Kindness Can Kill in Comedy

Josh Gondelman is one of the nicest comedians on (and off) Twitter. A writer for Last Week Tonight, co-creator of Modern Seinfeld and co-author of the new book You Blew It!, Gondelman still has time to regularly give his followers nightly pep talks, or at least respond with a like or a "thank you" to every kind tweet he receives.

Although Gondelman has performed for audiences of thousands, opening for John Oliver, Jen Kirkman and Pete Holmes, he still regularly performs at small shows around New York City. At a 10-minute performance at a small variety show in late October, Gondelman killed it despite a small, dark, half-empty room of people not necessarily even there to see comedy. He followed a jazz musician.

In a new joke about the phenomenon of ghosting, Gondelman said, "People call it ghosting, when someone breaks up by not texting back. But that's the wrong term. That's not ghost behavior. If there's a ghost in your life, he stays in touch."

Gondelman radiates humility and a relatable, everyday awkwardness alongside fierce confidence and wit. He has complete control of the room, and yet he'll use that power for good, not evil.

"I live very gently," Gondelman explains over a beer in an empty Williamsburg bar. He's just said he's never done drugs — not even weed, he tells Mic — and that he didn't "really drink" until he was 25.

"I've always been very un-fun," he jokes after explaining why he's afraid of trying substances: "I'm a habit person. I have a very weak version of an addictive personality." Gondelman doesn't seem like the type of guy who needs substances to be fun, though. His success as a comedian is partly derived from the fact that there's something fundamentally attainable about him. He was clearly not the popular kid in high school, but rather the nerdy kid who blossomed in college.

"I try to be kind and I try to reflect that in my comedy, but I'm also incredibly bad at being mean," Gondelman says. "I can't pull it off effectively so I always end up reverting back to politeness. I don't have a lot of weight to throw around in a metaphorical sense."

Yet Gondelman has conviction; he wouldn't be successful without it. He's just obsessively considerate. Recently, he's been tweeting jokes about a character type Bradley Cooper often plays, whom Gondelman describes as "the guy who had it all and then it all went wrong and now is gonna have it all again."

He says he feels guilty about these tweets. "I don't want to bum out Bradley Cooper by him seeing the tweets," he explains. "I don't want him to feel bad because of a thing I said." Gondelman's tweets aren't mean, just gently mocking. Yet he remains neurotically compassionate.

Gondelman himself has been on the receiving end of Internet mockery, despite attempts to avoid them. "I don't court haters," he says. "I don't thrive on people not liking things that I do. I treat people the way I want to be treated."

Seinfeld 2000, an absurdist parody of Gondelman's popular Modern Seinfeld Twitter account, is devoted to mocking Gondelman's comedic sensibility. "The people who write Seinfeld 2000 are super funny," Gondelman says. It's not a rip-off. But some of it is pointedly mean, and it's like, that's sort of a bummer. It's the comedic voice of someone who is opposed to the thing that I do."

Gondelman's method for dealing with inevitable Twitter trolls is simple: block them. "Blocking people on Twitter is terrific. It's a real nice thing to do because if there are people in your three-dimensional life who treat you like that, you certainly avoid them. You don't owe anyone that argument."

Gondelman has been doing comedy since before the invention of Twitter. He started out after his freshman year at Brandeis University, when a friend encouraged him to attend some open mics.

"I've always liked jokes and making people laugh," he says. "That's the most accurate answer I can give."

Niceness permeates Gondelman's comedy, but the comedian doesn't play it safe. He compares interracial dating to "bright red jeans: They look great on some people but I can't pull them off." Another of his jokes is a riff on the Margaret Atwood quote, "Men are afraid that women will laugh at them. Women are afraid that men will kill them."

"That's heavy," he jokes. "I don't know how to feel about it as a man who is also afraid men will kill me — worst-case scenario, while a woman laughs. ... I get that there's a lot of specifically gendered violence. But there's also a lot of nongendered violence, and I don't mean that in a men's rights way."

The joke works, Gondelman explains, because he's being honest about his vulnerability. "It's about my experience of feeling fear," he says. His humor seems fundamentally opposed to aggression, which automatically puts the audience at ease.

"It's hard to say what genre one's comedy falls into," Gondelman says. "I guess mine is friendly without being limp." His biggest challenge in his stand-up is creating stakes, because of how deeply nonaggressive he is.

"Being compassionate isn't hard, but doing compassionate comedy requires a slightly different toolkit than one that you might be used to practicing with," Gondelman says. "Wearing earnestness on your sleeve can be so funny. That level of genuineness and the craft behind it is something I really value."

Earnest comedy is having a moment right now. Shows like Broad City, Brooklyn Nine-Nine and Parks and Recreation derive their much of humor through the characters' adoration of one another. Gondelman's work falls into the same category as that of performers like Aziz Ansari and Maria Bamford, in which the comedian is often the butt of their own jokes.

Gondelman doesn't think that comedy as a medium is becoming nicer. Instead, he says, "there's room for more flavors, with the Internet. I like that. I don't know if I would have been a great nightclub comedian in 1990."

He appreciates comedy from the 1980s and '90s, while acknowledging that much of it is offensive. "It's not like you watch comedy from 1992 and you think, oh that the comedian is a monster," he says. "You think, 'I wish there wasn't so much casual homophobia in this sense of humor.' Because it takes you out of the part that's good and vital. You think, 'I wish that wasn't what the culture was doing then.'"

Gondelman's compassion remains extraordinary, even when it comes to offensive comedy. "If you're a good performer, I think it's easy to make people forget to be [empathetic]," he says. "I also don't think I don't think everyone goes into a comedy show feeling empathetic as an audience member. Sometimes it's like, 'Wow, you got people to neglect their fundamental humanity because that joke was so beautifully constructed.'"

Thankfully for Gondelman, his comedy encourages his audience to be compassionate — be it someone watching his set or writing his book, You Blew It!. He writes with co-author Joe Berkowitz, "We hope that by reading this book, you will feel less like a failure ... and less alone." If uniting an audience through comedy is Gondelman's mission, he's succeeding.