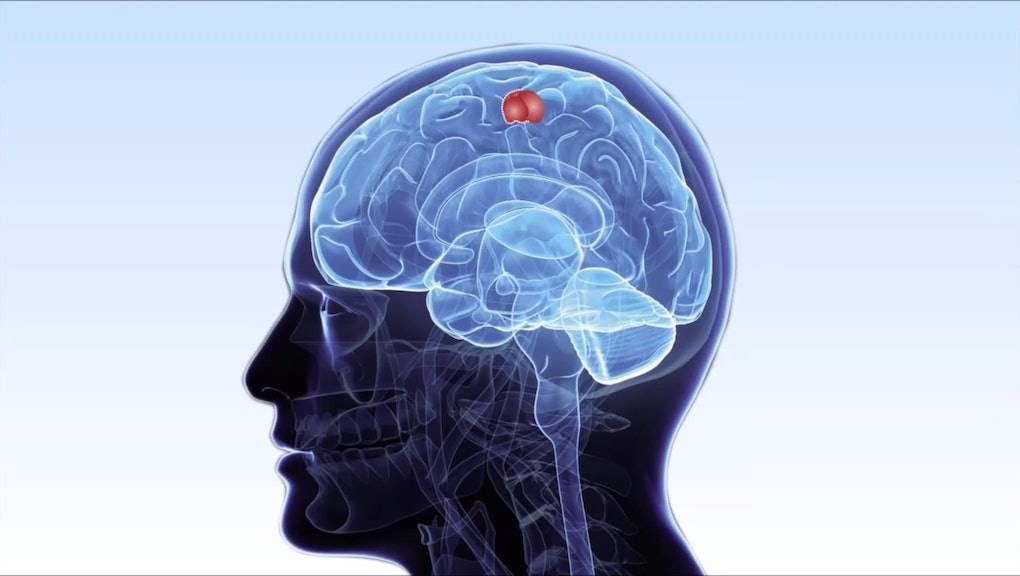 Thanks to a scientific breakthrough from Stanford University electrical engineers, the latest sci-fi gadget turned reality is a "tricorder," a la the Star Trek device that lets users (like medical everyman Dr. Leonard McCoy) diagnose illnesses from a few inches away, doing away with invasive pricks and pokes.

While it isn't a spitting image of Star Trek's fictional technology (it isn't the 24th century yet), the concept, called "noncontact thermoacoustic detection" in the team's Applied Physics Letters paper, could detect early-stage cancers with electromagnetic energy. The idea is that tumors grow additional blood vessels to continue growing, and that growth would show up as "hot spots" on an ultrasound.

It could also be used to detect plastic explosives used to booby trap roads in war zones. As Stanford's Tom Abate writes, the microwaves produced by the device would heat a muddy patch of ground where there might be a bomb, causing the mud to expand and "squeeze" the explosive, generating ultrasound signals that reveal the presence of the explosive — all from a safe distance.

Assistant professor Amin Arbabian and Professor Butrus Khuri-Yakub, who led the Stanford research team, began work on the project after the Defense Advanced Research Projects Agency, a U.S. military research and development branch tasked with finding cutting-edge innovation in military technology, was looking for a way to detect buried non-metallic explosives without coming in contact with the ground above them. Current detection methods can't locate plastic explosives, and anything that touches the surface would make the bomb blow up.

Since these microwave-induced thermal acoustics could expand the mud enough to detect the explosive, there would be no need for contact.

The technology would actually be the size of a handheld tricorder. According to Kevin Boyle, one of the Ph.D. students on Abrabian's team, the prototype is about the size of a deck of cards.

"The whole point is for it to be a handheld deal," Boyle told Mic. "There's a little package mounted on top of electronics, and the package contains CMUTs," or capacitive micromachined ultrasonic transducers, that are used for the remote detection of embedded objects, according to the team's paper. The main constraint is finding an appropriate, portable power source, which Boyle says would probably be something like a cellphone battery.

If the team wins the DARPA contract for the technology — they're currently in the middle of evaluations with DARPA's contractors — scientists would have a handheld means of fast, internal diagnostics. Not only can they look inside the human body and the skull, but they can peer inside steel beams to check for cracks before they're used on construction sites.

"We think a lot about traumatic brain injuries," Boyle said. "Athletes and soldiers get wounds from pressure or shock to the head, but they don't have immediate symptoms. With concussions, you want to know if you have them so you can rest, and with soldiers in the field, it's hard to manage that. If you have something portable, you can diagnose people in the field and not have to take time out of their duty."

How it works: Right now, sound waves travel through air just fine, but a lot gets lost when they have to move through solids — that's why the tool used for ultrasounds has to be placed directly on skin. The Stanford team's work would alleviate that.

"What makes the tricorder the Holy Grail of detection devices is that the instrument never touches the subject," Arbabian said in a university release. "All the measurements are made through the air, and that's where we've made the biggest strides."

According to the release, the team has been able to prove the concept by heating a flesh-like material implanted with a target they wanted to find. From a foot away, they hit the material with microwave pulses, heating it just enough (a thousandth of a degree) to find the target.

"We think we could develop instrumentation sufficiently sensitive to disclose the presence of tumors, and perhaps other health anomalies, much earlier than currently detection systems, nonintrusively and with a handheld portable device," Arbabian said in the release.

While the technology is just getting off the ground and it may take five to 15 years to be used universally, what's so exciting here is how noninvasive and easy it is.

"The aim is to make this a diagnostic tool, the kind of thing you'd have a trained nurse or technician use," Boyle told Mic. "You probably aren't going to CVS to scan yourself for breast tumors, but having a portable, low-power device like this lower all the inconvenience and training needed to operate it."

If the Stanford team's technology becomes widely available, we could see expensive tests, like MRIs or CT scans, being replaced by this faster, cheaper upgrade, making previously difficult tests happen in the time it takes to pick up your dry cleaning.