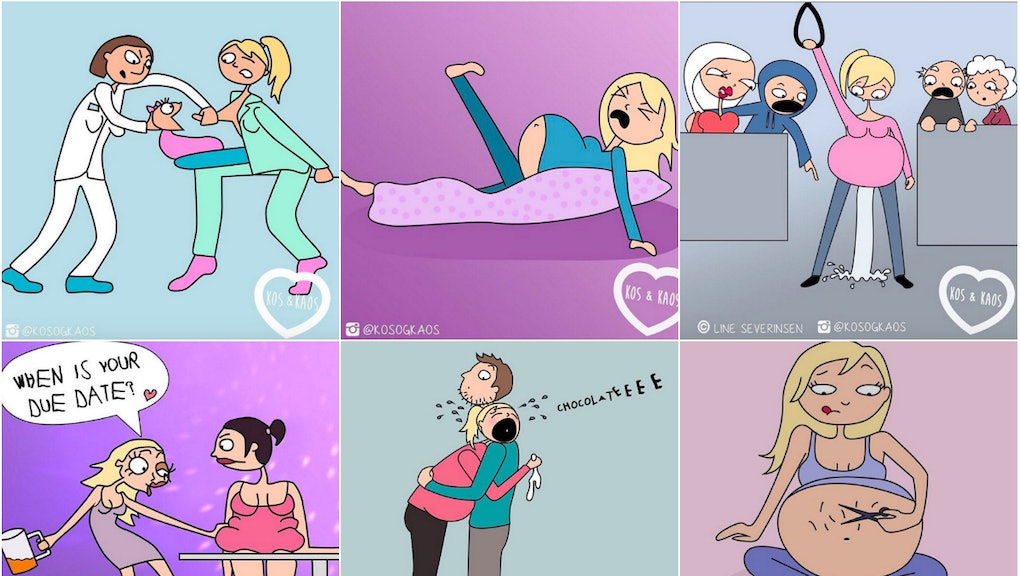 Looking at the lifestyles of famous pregnant women around the world — Kim Kardashian flawlessly rocking custom Givenchy on the red carpet, for instance — one can't help but wonder:

According to the humorous cartoon illustrations of one Norwegian mom, the answer to this question is "hell, no." Or at least, "not always."

Line Severinsen, who describes herself as an "illustrator, animator and mommy blogger," has been documenting the realities of pregnancy and motherhood with cheeky lil' images since becoming pregnant with her first child in 2012.

And she really goes there, y'all. Her cartoons explore everything from the development of hormone-fueled body hair...

... to fielding unwanted questions and comments from total strangers...

... to the struggle of giving up life juice wine...

... to dudes who are afraid of poking the baby with their weens in the throes of passion...

... to the fear of your water breaking in public.

Severinsen, a mother of two, told Mic that she started the series as a way to ensure other moms-to-be that they weren't alone in dealing with pregnancy struggles they might have otherwise been too self-conscious to talk about.

"I started this cartoon as a personal diary in 2012 when I was pregnant for the first time, with my daughter. I was feeling sick and tired all through my first trimester," she said. "Drawing helped me deal with the pregnancy problems. I started sharing them online, and got a lot of feedback from other women saying how much they love my cartoon, and that they can relate to these situations."

Indeed, many of the scenarios she depicts in her work — cravings, cramps, stretch marks and having to pee, like, all the time — are well-documented side effects of pregnancy that will surely prompt many moms-to-be to be all "it me!"

Severinsen hasn't stopped drawing since she gave birth. She now has a 3-year-old daughter and a 5-month-old son, so she is "sure I won't run out of stories," she told Mic.

Below, some humorous breastfeeding fodder for your Wednesday morning: