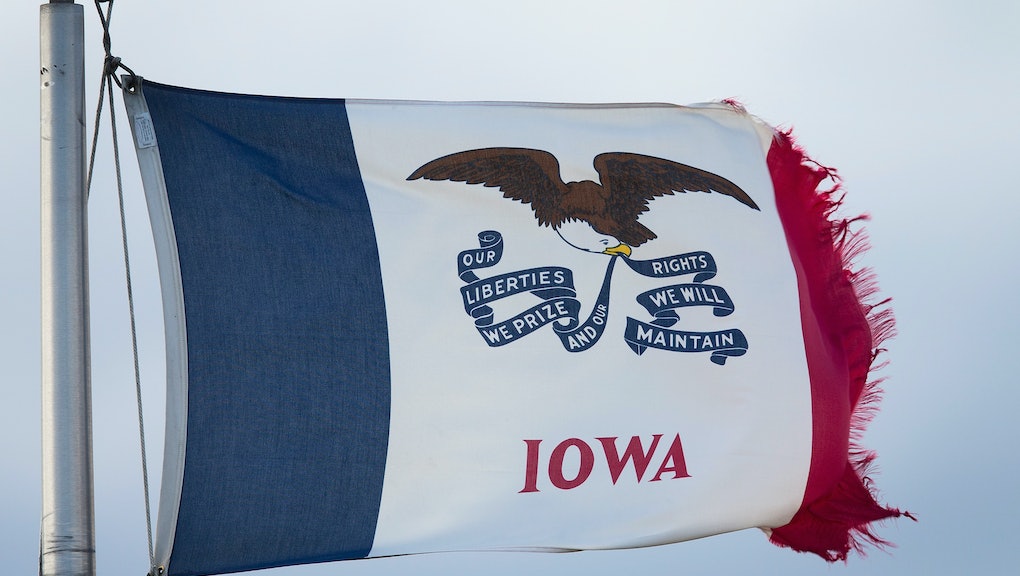 How Iowa Became the New Battleground for African Hair Braiders

Achan Agit was pregnant when she decided to close her hair braiding business in Des Moines, Iowa, in 2009. The store was called "African Dream" and, in addition to offering hair braiding services, it sold retail items to the city's growing African immigrant community. But as her difficult pregnancy progressed, thinking about the store's future became a nightmare, all because she felt she couldn't hire the best workers to sustain its operations while she stayed home.

"I can't hire anyone to braid because I don't have a license, which would get me in trouble if I hired people without having the license," she told Mic this week. "So I had to close it."

Agit is still braiding hair, but she does it almost in secret from her home. She doesn't advertise her services and relies on mostly word-of-mouth referrals. It's undoubtedly good business — braiding a full head of tiny, so-called "micro braids" can net up to $200 per client — but she could be making even more, she said. The profits would certainly make life easier for her husband and five children, not to mention the family she still supports in her native South Sudan.

Without a cosmetology license, her main source of income comes at a great risk: a $10,000 fine and up to a year in jail. In Agit's eyes, getting such a license wouldn't just be a headache but completely irrelevant to her craft. Of Iowa's 27 cosmetology schools, not one school offers specific coursework on natural hair care for black women or braiding in particular. And even if they did, Agit is a far cry from being able enroll: Iowa's cosmetology board requires licensees to have a high school diploma, but Agit left school before she was a teenager as her country grappled with civil war.

Now, she's one of two plaintiffs suing the Iowa Board of Cosmetology Arts and Sciences in an effort to loosen licensing requirements for women who braid hair. Iowa has become the latest battleground in a decades-long showdown over African hair braiding. It's a fight that's being waged not primarily by the women themselves, but an unlikely ally and is marked by centuries of thinking about black women's beauty standards.

Agit, 35, learned to braid the way many black — both African and African-American — women do: as a child, watching her mother while growing up in a small village in what was then known as Sudan. When she was 10, villagers began to pay for her work. She married at 17 and was eventually forced to flee the country with her family as the country's political and legal infrastructure collapsed under the weight of the Second Sudanese Civil War, which lasted from 1983 to 2005. The family's first stop was Egypt. When her daughter's classmates and their parents asked where the girl had gotten her hair braided, Agit realized she'd stumbled upon a decent hustle that knew no borders.

"That's when I started charging money for doing hair, so I can help support myself and my kids," she said.

Three years later the family moved to the United States. First Nebraska, then Kansas City, Missouri, and finally Des Moines, where they had relatives. In fact, it was an extended family member who convinced her to open "African Dream." "'Instead of working under someone, why don't you come here and open your own shop?'" they told her. So she did.

Then the pregnancy happened. The shop closed. And now, six years later, there's the lawsuit.

"I decided to sue them, so they can give me the opportunity to have my own business without having to worry that I would get in trouble with the law," she said.

Agit got in touch with attorneys from the Institute for Justice, a libertarian law firm based in Arlington, Virginia, that has made African hair braiding one of its most high-profile crusades. Since the 1990s, the institute has filed suits in 13 states, including Missouri, Texas and California. Each suit has a similar narrative: embattled women of African descent up against a hopelessly bureaucratic regulatory system that's bent on criminalizing a natural, chemical-free practice that is not only a cultural art form, but a potentially lucrative business opportunity. The cases make national news and incite public outrage across the political spectrum. And, with the exception of institute cases still pending in Iowa and Missouri, they are seeing meaningful results.

Meagan Forbes, an attorney for the Institute for Justice who's representing Agit in the Iowa case, said the motivation is simple. "We work to protect the rights of workers across the country to create an honest living, free from irrational governmental interference," she told Mic. "And these cases exemplify the government interfering with a person's ability to earn a living and do something that's completely safe, but here they're being prevented from doing that because of the state's licensing laws."

Hair and history: For the women at the center of these cases, that narrative isn't quite so simple. Isis Brantley sued the State of Texas with the institute's help in 2013. Brantley has had a long and decorated career in the industry; some of her most famous clients include Erykah Badu and Stevie Wonder, she said. While her suit didn't force the board's hand in getting rid of regulations altogether, it did lead them to admit that those rules are not "sensible or particularly well-crafted," according to the court's records.

For Brantley, today's fight isn't just about the present, it's about a much more painful past. "African hair has been enslaved in this country since they indoctrinated and enslaved us," she told Mic. "We were not allowed to comb our hair, groom ourselves, shampoo our hair, and we were not allowed to be seen in public with afros and braids and locs and twists. So, of course, now that we are saying, 'Hey, I'm a human. Oh, I look different. It's OK.'"

A burgeoning industry: Since the late 19th century, when Madam C.J. Walker's line of black hair and beauty products made her one of the country's first self-made female millionaires, black hair has been big business in the United States. But that business revolved around chemicals and heat that would melt tightly curled hair into compliance. The results were usually painful, sometimes deadly and always carried a reminder that black hair in its natural state just wasn't good enough.

It's only within the last few decades that natural black haircare has flourished. Some estimate that it's a $500 billion industry, and YouTube is brimming with do-it-yourself tutorials on shampooing, moisturizing, twisting and locking. But beauty schools have been slow to adopt coursework that teaches the nuances of caring for black hair in its natural state. Instead, braiders are required to take classes in everything from chemistry to hair cutting and doing manicures.

Those  schools insist that they're trying. "The hair braiding field is growing within the U.S.," Ashley Morris of the American Association of Cosmetology Schools told Mic in an email. "Schools training in the beauty profession are consistently expanding and modifying their curriculum as the industry demands and consumer needs change."

Meanwhile, professional braiding has become one of the hundreds of industries that's come under state regulation in recent decades. Tanisha Ford — an assistant professor of women, gender and sexuality studies at the University of Massachusetts, Amherst, and author of the forthcoming book Liberated Threads: Black Women, Style and the Global Politics of Soul — told Mic that it's an example of "where the cultural meets the commercial." In Ford's analysis, black braiding has gone from the intimacy of getting cornrows while sitting on a pillow on a neighbor's floor to something much more lucrative and, therefore, messy. "A lot of hair braiders are African women working in hair braiding salons," Ford told Mic. "This is [a] way the government is trying to limit what types of money immigrants can make in this country."

It's a generally agreed-upon fact that regulations on some level are necessary to ensure customer safety. People have died or suffered irreparable damage in hair salons. But critics of such licensing are quick to point out that those injuries are rare among braiders.

"It should be relatively easy to get information on whether or not a hair braider is good or bad," Rebecca Haw Allensworth, an associate professor at Vanderbilt University Law School whose work focuses on occupational licensing, told Mic. "We tend to think the market tends to do a good job of sorting out good and bad products, and word of mouth or Yelp does all that well. So, I don't think of African hair braiding as a very good candidate for licensing."

For the women caught in the crosshairs of this regulatory battle, the hope is simple: They want to work.

"I'm still looking for a job," Agit said. "For me right now, the only help I have is doing hair at home, which is only my relatives that I do their hair and they give me some money to help myself with. So, it means a lot to me."